FIRE > Newsdesk > ‘Newsweek’ Covers ‘The Other Side of the Sexual Assault Crisis,’ Features FIRE Expert 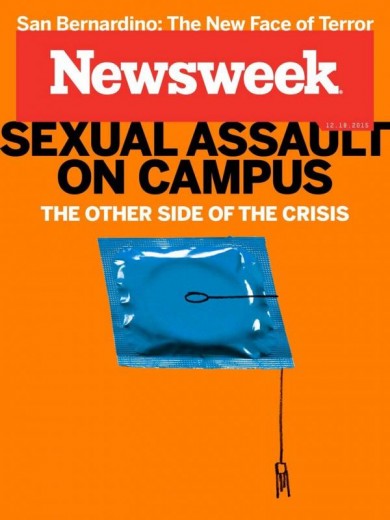 FIRE Director of Policy Research Samantha Harris is featured in the latest Newsweek cover story, out today, detailing “The Other Side of the Sexual Assault Crisis.” The story profiles students who claim campus tribunals investigating them for sexual assault violated their due process rights. In the process, the students say they were branded campus criminals and expelled without the right to defend themselves, and that they ultimately had their reputations ruined.

Colleges have recently ramped up their investigation of sexual assault accusations because a 19-page letter told them to do so. In 2011, the U.S. Department of Education’s Office for Civil Rights issued a “Dear Colleague” letter. It clarified that sexual violence is a subset of sexual harassment, which in an education setting falls under Title IX of the Education Amendments. The OCR threatened to investigate schools thought to be insufficiently zealous with sexual assault cases, and if it found a school had violated Title IX, the OCR might rescind federal funding.

As Sam explained to Newsweek, this directive—which FIRE has extensively criticized since its issuance—has had serious, even potentially unlawful, repercussions. Newsweek writes:

Victims’ advocates say the OCR letter helped destigmatize sexual assault and encourages survivors to report. But a less-told consequence is the tendency by schools to trample due process rights for the accused, according to some higher education and legal experts. “There was for a long time a perception that colleges were not responsive at all to claims of sexual misconduct,” says Samantha Harris, director of policy research at the Foundation for Individual Rights in Education. These days, however, “a growing number of people are starting to be concerned that the pendulum has swung too far in the other direction.”

FIRE has been critical of these university-run investigations. As FIRE’s Legislative and Policy Director Joe Cohn wrote in The Hill earlier this year, the due process problems with campus sexual assault investigations are numerous:

Campus hearing panels stray beyond their competence when asked to adjudicate campus sexual assault accusations. They lack the ability to gather forensic evidence and the expertise to evaluate it. They lack the ability to subpoena witnesses or put them under oath. Parties do not have discovery, and rules of evidence limiting the use of improper information and requiring the consideration of relevant material do not apply. Except in North Carolina and North Dakota, neither student has the right to legal representation. Expecting panels of student conduct administrators, professors, and students operating under these limitations to consistently reach just results is unreasonable.

Sam told Newsweek that too many people seem alarmingly unconcerned about these due process violations: “Even though people seem to understand the importance of due process generally, there seems to be this blind spot with regard to these sexual assault claims.”

You can read the full story on Newsweek’s website.