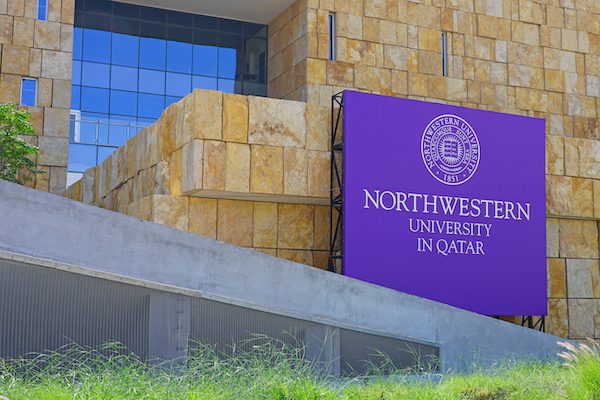 This summer, Northwestern University updated its Faculty Handbook, “a product of an ongoing cooperative effort between the Faculty Senate and the administrative officers of Northwestern.”

The Daily Northwestern reported last month that the Faculty Senate passed a motion to update the handbook’s academic freedom policy at its July 14 meeting, revisions which had been “at least two years in the making.” The revisions, as well as the discussions about them among faculty, offer interesting insights into how universities assess academic freedom protections at their branch campuses in other countries.

This is an an especially relevant subject given the administration’s cancellation of an event featuring an openly gay musician at its Qatar campus last year. While Northwestern claimed it did so “out of abundance of caution due to several factors, including safety concerns for the band and our community,” its campus partner, the Qatar Foundation, disagreed, asserting the event was canceled because it conflicted with Qatar’s laws and “cultural and social customs.”

Minutes from the last several meetings of the Northwestern faculty senate touch on the question of academic freedom at Northwestern’s branch campuses. At the June 2 meeting, where the academic freedom proposal was first read, Faculty Rights and Responsibilities Committee Chair Senator Harris Feinsod went:

Faculty members went on to debate language asserting that academic freedom would be offered “to the extent that applicable laws allow” — an obvious potential concern for faculty working at a branch campus in a country with weakened academic freedom protections due to local legal restrictions, such as Qatar. At the meeting, Feinsod asserted that faculty and administrators had taken opposite sides of the issue:

Some faculty, Senator Feinsod said, also took exception to the phrase “to the extent that applicable laws allow,” in the final paragraph in section 1. He said they made inquiries about removing such language. However, the administration has continually advocated for it. He said the administration’s case is that the phrase is not meant to limit faculty’s academic freedom rights, but rather to alert faculty to the extent, or rather limit, academic freedom will allow for legal protections in another country.

Senator Amaral asked about the “extent that applicable laws allow” phrase Senator Feinsod mentioned earlier. He wondered if that phrase applied to the United States only or all countries . . . Senator Rodgers said that in regard to the applicable laws phrase, it is meant to protect faculty to the extent the University has the power to do so, knowing that some countries do not have the same speech protections as the U.S.

However, a professor at the Qatar campus added that he, personally, had not felt pressure to self-censor in his classroom:

Senator Abraham Abusharif said he is a professor in Qatar and that he wanted to make a few clarifying remarks related to the applicable laws statement. He said contracts are decided by the administration and that Qatari law does not prevent faculty from having lengthier contracts. He said each American school in Qatar has a separate contract with the Qatar Foundation, which is run by the Qatari government. He said he does not believe there has been a challenge at the University to Qatari law, but he does know that the Evanston campus negotiated with the Qatar Foundation about academic freedom. He said the Senate should consult the lawyers who made that agreement. For his part, he said that he says whatever he wants in his classroom and he doesn’t feel any self-censorship.

At the subsequent July 14 meeting, held “to allow for more time for faculty review of the legislation and proposed changes” according to a report in the Daily Northwestern, Faculty Handbook Committee Chair Senator Ceci Rodgers took issue with the “applicable laws” language and proposed a different framing for the disparities among academic freedom protections across borders.

Senator Ceci Rodgers then made a motion to delete the phrase “to the extent that applicable laws allow” in paragraph 1.1 and insert the following sentence at end of the same paragraph: “While academic freedom essentially coexists with established legal frameworks, on rare occasion the two may be in conflict.” The motion was seconded, and the floor was then opened for discussion.

Senator Rodgers began discussion by providing some rationale for the change. She said that a dialogue at the June 2 meeting centered around the phrase “to the extent that applicable laws allow” and the committee chairs agreed to go back to the administration and General Counsel to get clarification on that wording. Senator Rodgers said it was important to the administration that there be some language in the proposal recognizing the legal parameters around academic freedom. In the end, Senator Rodgers said they were able to find more descriptive, as opposed to prescriptive, language and came up with a phrase recognizing those legal parameters without limiting or undermining academic freedom.

At this meeting, the Faculty Senate passed a motion to update the academic freedom language in the handbook. The new handbook, effective August 5, now states:

All faculty at Northwestern University, tenure-eligible and non-tenure-eligible, and all other officers of instruction to whom this handbook pertains, enjoy the protections of academic freedom in these endeavors, regardless of the campuses or branches of the university with which they are affiliated, inclusive of faculty participating in research, teaching, and related activities abroad. In safeguarding the rights to academic freedom for themselves and for others in the community, faculty also accept their share of responsibilities for the governance of the institution, for fulfilling their duties with intellectual honesty, and for protecting the rights of others in the community to learn, conduct research, and carry out the essential functions of the University free from interference or obstruction. Faculty further accept the responsibility to observe the stated policies of the Faculty Handbook. While academic freedom essentially coexists with established legal frameworks, on rare occasion the two may be in conflict.

FIRE is pleased to see faculty engaged on this important issue, and press for clarity on what their rights are at branch campuses abroad. Specifying how the university can or will protect them, should academic freedom violations occur, is a duty of administrations pursuing or maintaining such programs.

Universities should work to protect academic freedom in their international endeavors, and be upfront about their limitations in the collaborations they choose to pursue.

The dispute over the language about academic freedom existing “to the extent that applicable laws allow” cuts to the heart of the issue about American institutions overseas: Universities may promise their faculty a certain set of rights, but they likely cannot supersede local law.

This is precisely why FIRE has argued that, while academic freedom promises are important, it’s vital for universities to explicitly address how they will respond when academic freedom does conflict with “established legal frameworks.” Universities should work to protect academic freedom in their international endeavors, and be upfront about their limitations in the collaborations they choose to pursue. Northwestern, for example, still owes its community an explanation about the Qatar Foundation’s statement about last year’s event cancellation.

But detailing how they’ll respond, what measures they’ll take, and what violations may cause them to withdraw from overseas programs, might be the most important step they can take. Cornell University led on this issue when it released a set of guidelines ​​in 2019 addressing the institution’s partnerships with universities and programs abroad and what steps they will take should rights violations occur within the program. (Whether Cornell is living up those guidelines, however, is up for debate.)

FIRE will continue to watch how Northwestern’s faculty and administration address this important issue. If you’re discussing academic freedom or free speech protections at your university’s branch campus or international partnership, reach out to FIRE — we want to hear about it.