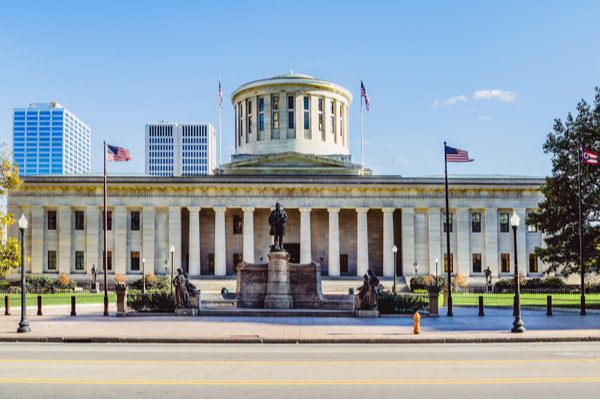 Earlier this year, the Ohio Senate unanimously passed SB 40, the Forming Open and Robust University Minds (FORUM) Act. It passed the Ohio House Higher Education Committee last week and is ready for a floor vote in the state’s House of Representatives. If it passes the House, it will head back to the Senate for a final vote and then to Gov. Mike DeWine’s desk for his signature. Because the legislation’s enactment would provide crucial free speech protections to students enrolled in public institutions of higher education across Ohio, FIRE strongly supports its passage.

Because the legislation’s enactment would provide crucial free speech protections to students enrolled in public institutions of higher education across Ohio, FIRE strongly supports its passage.

The bill is helpful in many ways. SB 40 prohibits public institutions from limiting student speech into tiny, misleadingly labeled “free speech zones.” This would bar institutions from taking the same path that the University of Cincinnati took in 2012, when it limited “all demonstrations, pickets, and rallies” to an area comprising just .1% of the university’s campus. FIRE sponsored successful litigation against the university, which resulted in a federal court ruling that the policy “violates the First Amendment and cannot stand.”

Despite the merits of the bill, there have been some misplaced arguments suggesting that it’s a solution in search of a problem and would create problems of its own.

One opponent of the bill testified that it isn’t needed because Ohio campuses don’t restrict student speech rights. A quick look at FIRE’s Spotlight on Speech Codes database shows that this just isn’t the case. Of the 12 public colleges and universities in Ohio that FIRE rates in our Spotlight database, only one — Cleveland State University — receives our highest “green light” rating. That means that the other eleven institutions maintain at least one written policy that restricts student speech rights.

It was further argued in the hearing that most censorship on campuses in Ohio is the result of students censoring each other and that the legislature has no business intervening in this problem. While FIRE is increasingly worried about students using their activism to stifle the voices of their political adversaries, the bill’s substantive provisions are focused on eliminating official policies (speech codes) and practices of institutions that violate students’ free speech rights. These matter too, as the case against the University of Cincinnati shows.

Another misguided argument against the bill was expressed by a member of the House Higher Education Committee who, during a recent hearing, argued that SB 40 prohibits institutions from charging student organizations or outside groups security fees when reserving space on campus. This is not the case. While the bill does state that institutions may only consider content- and viewpoint-neutral criteria in determining fees to charge student organizations for the use of campus facilities, it does not prohibit the assessment of security fees on a viewpoint-neutral basis. This means that an institution could, for example, charge different amounts depending on the time of the event, whether alcohol was being served, the size of the venue, or other factors that are evenly applied without regard to the viewpoints expressed.

Essentially, the provision prevents institutions from establishing policies that impose security fees tied to the viewpoint or content of the event, which risks allowing critics to veto who may be brought to campus by threatening to create a disruption that would necessitate additional security. That form of heckler’s veto was prohibited by the  Supreme Court in Forsyth County v. Nationalist Movement, in which the Court struck down an ordinance where government officials charged parade applicants security fees that were based on whether protests against the parade were anticipated. As the Court observed: “Speech cannot be financially burdened, any more than it can be punished or banned, simply because it might offend a hostile mob.” The language in the bill reflects the Supreme Court’s requirement, one that is unfortunately and commonly ignored by college administrators and student governments when they set security fees.

SB 40 deserves to pass the House of Representatives with the same broad bipartisan support it enjoyed in the Senate, and Governor DeWine should sign the bill when it is sent to his desk. Students who attend public colleges and universities in Ohio deserve to know that their institution will respect their constitutional rights. Their legislature should insist they do so.

You can read the full text of the bill below: