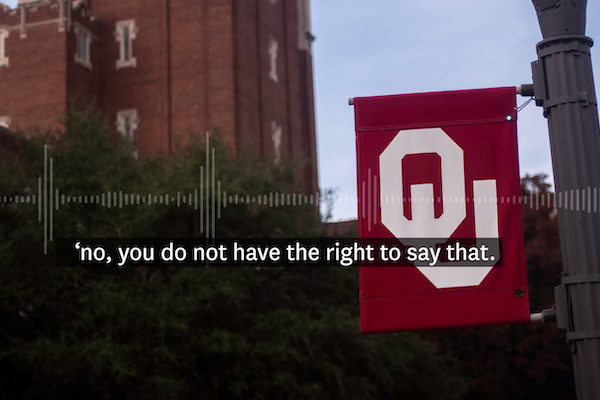 On Tuesday, FIRE publicized the University of Oklahoma’s “Anti-Racist Rhetoric and Pedagogies” workshop, in which instructors for English composition courses were taught how to shut down student arguments and speech that the instructors considered problematic. Yesterday, OU defended itself in a response to FIRE, saying that “participation in any given workshop is voluntary.”

This response entirely misses the point of the problem. OU probably knows this, but let’s spell it out.

The correct number of faculty members OU should train to indoctrinate and censor students based on their viewpoint is zero.

While it’s good that only some OU instructors attended this training instead of all of them, the correct number of faculty members OU should train to indoctrinate and censor students based on their viewpoint is zero. (Remember: FIRE’s concern isn’t about faculty censoring students for disrupting a class with their opinions — it’s about students not being able to write on certain sides of topics because those opinions are not shared by the instructors.)

A recording of an “Anti-Racist Rhetoric & Pedagogies” workshop acquired by FIRE raises alarm bells about the state of free expression and conscience at @UofOklahoma.https://t.co/8DXLXnaqbf pic.twitter.com/JkU5JMEOel

Watching the workshop, it’s very clear that the leaders are speaking on behalf of OU. As FIRE’s Executive Director Robert Shibley told Newsweek, OU is “empowering the people instructing this to toe” the university’s official line. This workshop “crosses the border from being education into indoctrination — the kind of arguments they can make, even the kind of sources they can consult.”

FIRE appreciates OU’s statement that it “unequivocally values free expression and the diversity of all viewpoints.” However, we’ve heard this before, and it is meaningless without action.

OU’s actions consistently demonstrate a disregard for free speech, as it time and time again and again skirts its First Amendment obligations. And given that FIRE has been told that OU removed the course recording from the Canvas page where it was housed, there’s a good chance that OU knows it has yet again been caught doing what it shouldn’t.