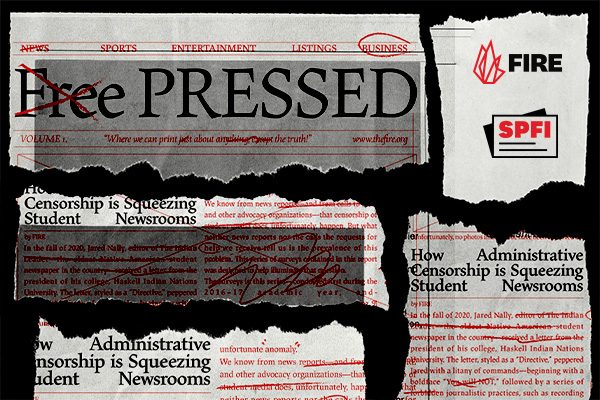 If you’ve been following FIRE’s Newsdesk this week, you already know that today is Student Press Freedom Day.

At FIRE, we celebrate and defend freedom of the press on college campuses every day of the year: We get numerous calls and messages from student journalists throughout the year seeking help when they face censorship, and our new Student Press Freedom Initiative and 24/7 Student Press Hotline (717-734-SPFI) are designed to offer rapid support when student journalists need it.

This year, for Student Press Freedom Day, we wanted to look at the issue of college media censorship from a slightly different angle. We could tell you anecdotes about all the cases we’ve been working on (and, let’s be honest, we’ll probably still do that), but instead of solely relying on anecdotal evidence, we wanted to present you with data.

This report asks, “What does the problem of student press censorship actually look like?”

To answer this question, we conducted a nationwide survey of editors of newspapers at public, four-year institutions. And the results weren’t exactly pretty.

63.8% of editors reported experiencing at least one instance of administrative censorship in the year preceding the survey.

“What does the problem of student press censorship actually look like?”

This was the second time this survey has been conducted. I conducted a nearly-identical survey during the 2016–17 academic year as part of my master’s thesis. And the numbers haven’t really changed since then. The earlier survey indicated that 60% of editors experienced administrative censorship in the year prior, which — when you take into account the margin of error — is nearly identical to this year’s 63.8%.

Other editors reported experiencing funding threats, threats to their advisers, and threats of job loss, among other censorship practices.

The survey also explored the question of what topics student journalists might believe their administrators don’t want them covering. Perhaps unsurprisingly, editors most reported believing that administrators disapprove of their publications covering topics like administrative decisions (40.6%), college personnel issues (40.6%), and college finances (31.9%).

The fact that 63.8% of respondents reported experiencing censorship tells us a lot about the state of student press freedom. First, it tells us that the problem is more widespread than anecdotes might suggest. While organizations that defend student journalists’ rights, such as FIRE and the Student Press Law Center, hear from numerous student reporters in need of help every year, there are likely many more students who simply don’t call for help.

FIRE’s Student Press Freedom Initiative is on a mission to change that.

The fact that 63.8% of respondents reported experiencing censorship tells us a lot about the state of student press freedom.

We offer several resources that we hope will help student journalists know when to call for help and make it easy for them to do so.

For example, CanIPublishThis.com — our interactive guide to media law — helps student journalists work through potential legal risks in their content and offers insight on when it’s time to call a lawyer.

When the time comes to call for help, our 24/7 legal hotline — 717-734-SPFI — makes it easy for student journalists and their advisers to get in touch. This hotline allows us to quickly offer resources and information, as well as jump into advocacy in urgent situations.

And we’re dedicated to reaching out to student publications that may just not know resources exist. Just two weeks ago, upon the launch of SPFI, we sent boxes of snacks to 200 student newsrooms across the country, letting them know we’re here if they need us. And, to another 1200 student newsrooms, we mailed copies of our guidebook Can I Publish This?: A Student Journalist’s Guide to Self-Directed Pre-Publication Review.

Our plan is to repeat this survey again in three years, allowing us to collect longitudinal data about the status of college press freedom in the United States. And, until then, we’re going to do our best to bring that 63.8% down.