FIRE > Newsdesk > Passion to Action: Howard U. Students Speak Out Against Sexual Assault

As FIRE’s communication coordinator, I have had a few opportunities to travel to college campuses to witness how student activists are taking advantage of free speech and the First Amendment. This is an inaugural post that I hope will become a series in which I interview students from across the country about how they’re using free speech. Since I work in Washington, D.C.—home to many institutions of higher education—I decided to start with Howard University.

This piece is about two students at Howard—Tori Elder and Alexis McKenney—who didn’t plan on being student activists, but now are the leaders in a movement that has been enabled by the exercise of free speech and free assembly on Howard’s campus. (While Howard is private, it states that “all students are guaranteed freedom of expression, inquiry and assembly.”)

It all started when Elder and McKenney began hearing disturbing allegations last month of numerous sexual assaults allegedly committed by a former student-employee. Believing that Howard didn’t do enough to keep students safe, the pair, along with other students on campus, felt compelled to do something.

Elder and McKenney were among students who got wind of the alleged events via a series of tweets on March 22:

Students protesting at @HowardU after RA claimed she was raped by fellow student. #TakeBacktheNightHU pic.twitter.com/2LFoIy2I7s

“No one was notified, no one knew about it until [one of the alleged victims] started tweeting about it,” said McKenney.

Elder described Office of Residence Life administrators as “crazy” for failing to inform students despite the crimes having been reported to the university itself, campus police, and the Washington, D.C. Metropolitan Police. “You all didn’t let us know,” she said.

Elder and McKenney decided to speak out.

In fewer than eight hours, the team helped organize a demonstration to garner the attention of Howard’s administration.

“All of us love Howard,” McKenney said. “But at the same time we have to hold them accountable.”

Naala Johnson, one of McKenney’s friends, designed a flyer promoting the March 22 event: 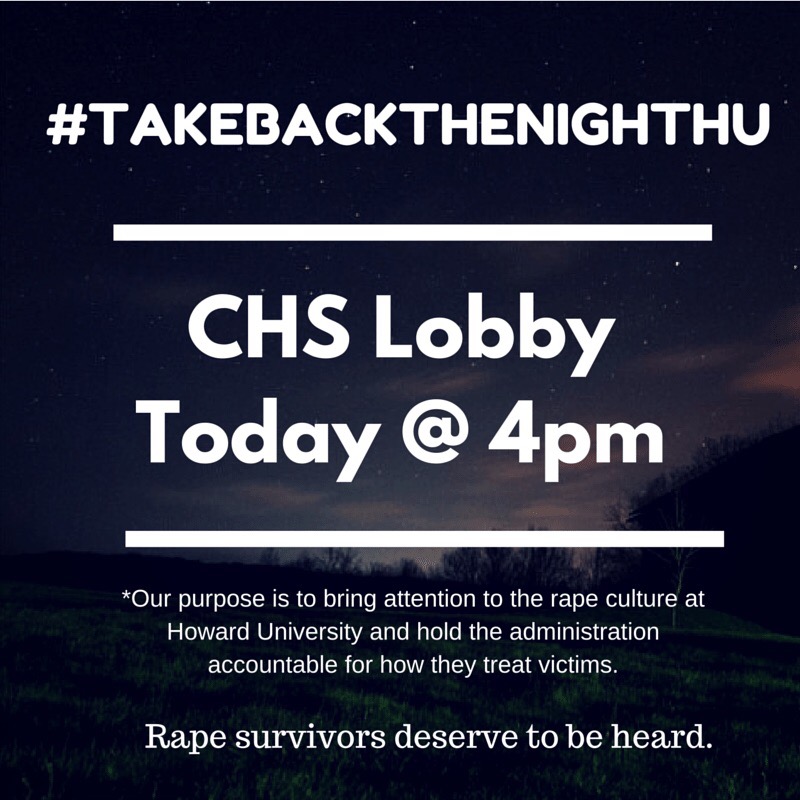 And another flyer listing demands that students wanted Howard to consider: 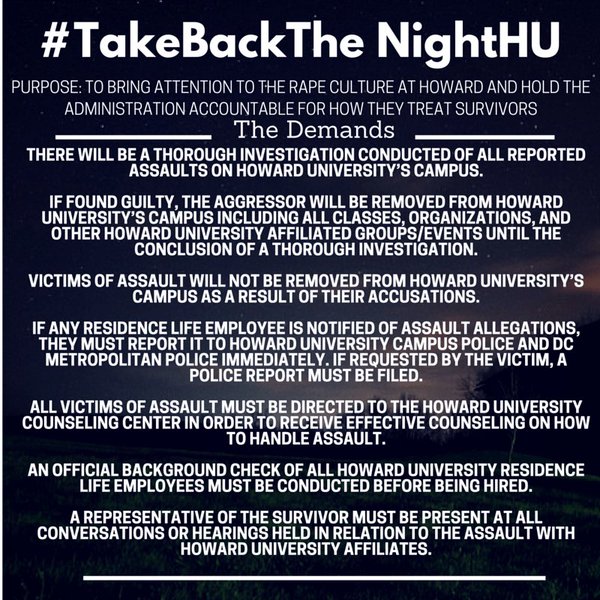 “It was at least, maybe, 175 to 200 people. It was a lot of people and we were not expecting that at all,” Elder said of the demonstration, which included student speakers and a march to the administration building. “Everyone wanted to see something done about this.”

Elder also reached out to news outlets including The Washington Post, which covered the story, along with a variety of local and national media.

The women created a Take Back The Night HU Tumblr account and the Twitter handle @TBTNHU to spread awareness and get the word out about future events.

Howard responded to the demonstrators with a statement listing school policies that it claims already addresses the student demands. (According to McKenney and Elder, the policies on the books to which the Howard administration pointed are not enforced.)

Progress✊? Part of the university-wide email sent out in response to our protests yesterday #TakeBackTheNightHU pic.twitter.com/LvkYWlGK04

Among those demands are that sexual assault allegations be investigated properly, including mandatory reporting to campus and local police. (McKenney and Elder agree with FIRE’s stance that the police do a better job investigating sexual assault than Howard’s administration.)

Accountability is important for McKenney.

“I got involved with this because a lot of the times people say that students, especially at Howard, we take to Twitter and we don’t actually do anything about the things that upset us, or the threats to our rights or our safety and that it’s really important that we actually follow through and do something and make sure that change is actually happening,” she said. “We actually have to do something and our voices matter.”

Many of their fellow students in the dorms are very grateful that Elder and McKenney decided to take action.

“A lot of people have reached out to me as far as ‘thank you so much, you’ve given us a voice,’” said Elder.

Despite the appreciation from her peers, Elder says she has reservations about speaking out and trying to create change at Howard. Elder explained that on the day of the first demonstration, one of the dorm building managers told the police to come and talk to her about the demonstration and what the students were trying to do. According to Elder, it seemed like the building manager was trying to get the police to arrest her because she might cause some kind of disruption.

“I really want to create change, but I don’t want a target on my head,” said Elder. “I’m going to continue because we need change, and nobody else is going to do it. I have to stick to my guns and remind myself I’m doing this for a good cause.”

McKenney and Elder do not intend to stop their activism any time soon.

“It’s easy to say ‘I don’t like that.’ Okay, but what’re you going to do about it?” said Elder. “I feel like the university still thinks of us as its children.”

Through this process both Elder and McKenney have learned about themselves, including skills they didn’t know they had. Elder is a film major and wants to be a director because she doesn’t like the attention on her, but has learned she can be very vocal when she needs to be.

“I learned that I can put action to my passion,” said McKenney. “Being a part of this has made me realize that I do have this power.”

I really enjoyed meeting with McKenny and Elder on Howard’s campus. FIRE is always looking for opportunities to speak with students about why free speech is important to them. Students interested in getting involved on their campuses are encouraged to join the FIRE Student Network, and can to reach out to FIRE at fire@thefire.org for additional information.