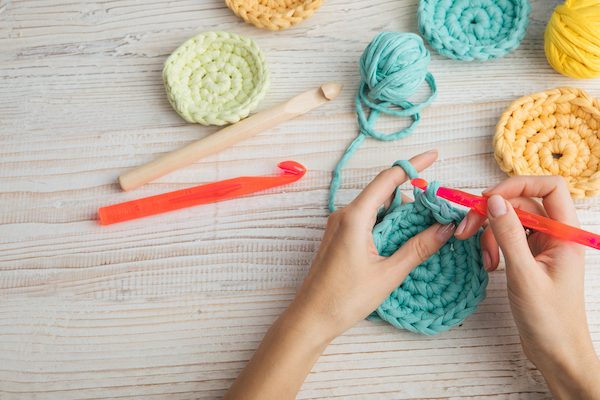 Last winter, I fell in love with crocheting. I taught myself entirely from Youtube videos and started by making scarves, then stuffed animals, and eventually little frog hats. This led me to a private Facebook group, which connected me to hundreds of crocheters around the world who posted pictures and exchanged tips.

Everything was harmonious. Until it wasn’t.

Shortly after I joined, the group erupted in controversy. One member posted a picture of a unique creation: a rainbow-striped penis plushie with a little face on it. The penis was crocheted, but no one had ever posted anything like that in the group before.

Usually the comments on posts in the group were supportive, with group members complimenting others’ creations, offering friendly tips or advice, and asking for a link to the pattern. This was the first time an item had been met with vitriol.

“How could you post something as obscene as this on this page?” someone furiously wrote. “There could be children on here!” Others agreed, citing how they crochet to escape the kind of red-hot, raw sensuality that abounds in the rogue internet. To them, the crochet group was a safe haven, and they did not consent to see the penis, real or not.

No reasonable person could mistake that for an actual body part.

But just as many members of the group scoffed at the naysayers. They found the rainbow penis funny and creative, and soon others were posting pictures of their own crocheted penises. One asked for the pattern, made dozens of penises, and posted them over and over again in the group as an act of protest. Others simply “disliked” existing positive or negative comments, or posted angry-face emoji reactions.

It eventually got to the point where group members were calling on the Facebook police to intervene. Most private Facebook groups are controlled by moderators who organize the posts, enforce rules, approve new members, and in some cases, ban participants. Many members called for the moderators to make a statement condemning the rainbow penis. The moderators stayed silent, probably hoping the controversy would die down. It didn’t.

Was there free speech in the world of crochet Facebook groups? This question became the subject of ruthless, intense debate.

Free speech scholars have long debated obscenity. The Supreme Court set the prevailing standard for what constitutes obscenity in Miller v California. Under the “Miller Test,” a work is obscene if: (1) the average person applying contemporary community standards would find the work appealing to prurient interests — in other words, arousing —  which, considering the item in question, did not seem realistic here; (2) the work depicts or describes, in a patently offensive way, sexual conduct specifically defined by the applicable state law; and (3) the work, taken as a whole, lacks serious literary, artistic, political or scientific value.

While the crochet penis would certainly not lead to the jailing of its crafter, it did lead to some internal and fruitful discussion. Those in favor of the penis argued that it did not break any of the group’s existing rules. (Rules in the crochet group stipulated that members weren’t allowed to illegally upload patterns they didn’t create, post items they did not crochet, or post non-crochet content.) It was a crocheted item made by the member who posted it, the pattern matched the description, and the member was not trying to sell the item. By those standards, the post was certainly allowed. However, whether or not it should be allowed in a private and casual Facebook group was a different question entirely.

The anti-penis advocates continued to argue that the object was obscene and offensive. Certainly, if someone were to upload a nude photograph of a real appendage, the moderators would swiftly delete it. Why should this crocheted object be any different?

In response to that point, the pro-penis faction asserted the crocheted penis was rainbow, striped, and had a smiling face stitched on it. No reasonable person could mistake that for an actual body part. The fights continued. Some members made posts about how they were leaving the group altogether because the space had become toxic. Soon, the group became flooded with discourse on the subject. The usual yarn recommendations, project pictures, and tips were being pushed to the bottom. Something had to give.

Free speech is essential to a functioning democracy, whether it is discussed in the context of a crocheted penis, or the Constitution itself.

Eventually, the moderators made a statement. The controversy was tiring and distracting. The group was, at its core, about crocheting, not debates about the literary or artistic merit of a crocheted version of male anatomy. The moderators made a statement: Those who were offended were free to go. This “averting of the eyes” to avoid further exposure is not unlike Cohen v. California’s assertion that those offended should “avert their eyes.”

Both camps were somewhat happy with this, and the controversy died down. But the Penisgate saga raises some interesting questions about free speech. What is objectionable and what qualifies as something that should be censored? Who gets to decide when there is disagreement? This experience, and the responding fallout truly allowed me to think about issues of free speech critically.

Culturally, I think there is a tendency to think issues of free speech and obscenity are so abstract that they’re something for lawyers, politicians and lawmakers to reckon with. But in reality, these issues hit close to home and are all around us. Free speech is essential to a functioning democracy, whether it is discussed in the context of a crocheted penis, or the Constitution itself.

Melanie Nolan is a rising senior at Skidmore College and a FIRE summer intern.