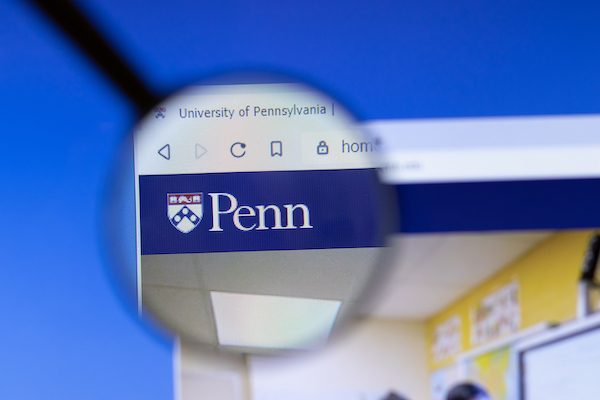 The University of Pennsylvania Law School has asked Penn’s faculty senate to begin the process of punishing tenured law professor Amy Wax — up to and including termination — for what’s characterized as “intentional and incessant racist, sexist, xenophobic, and homophobic actions and statements.” While members of the Penn community are free to denounce and challenge controversial statements, they cannot punish Wax for her expression without weakening free speech and tenure protections for all Penn faculty.

But that’s precisely what dean Ted Ruger did June 23 when he wrote Penn’s faculty senate chair asking her to convene a hearing board to evaluate Wax’s future at the university. Ruger accuses Wax of inflicting “harm” on Penn’s faculty, students, and staff, claiming her statements have led students and faculty “to reasonably believe they will be subjected to discriminatory animus if they come into contact with her.”

Ruger’s letter concludes with a request that the newly-formed hearing board issue a “major sanction” against Wax.

The dean’s report marks the latest step in a monthslong process of sanctioning Wax for her speech as a faculty member at Penn — speech that, while offensive to many, remains protected by Penn’s promises of academic freedom.

The report accuses Wax of conduct “antithetical to the University’s core mission to attract a diverse student body to an inclusive educational environment,” disseminating false information about different segments of Penn’s community, and exploiting “access to students’ confidential grade information.” Wax lost her ability to teach first year classes back in 2018 after she said black students were “rarely” in the top half of her classes.

Penn is creating a chilling precedent bound to haunt other faculty members by muddying the waters to the point where Penn’s future sanctions against Wax inextricably tie to her protected expression.

The report also says Wax mischaracterized “Law School policies in ostensible support of derogatory and inaccurate statements made about the characteristics, attitudes, and abilities of her students,” and criticizes her invitation of Jared Taylor, a white supremacist, to give a guest lecture and attend a lunch with students.

Ruger also cites a number of student reports and complaints about Wax’s comments, particularly from minority students who he argues “have chosen to forego enrollment in her classes due to a concern they will be treated more harshly and unfairly relative to their white peers.” Wax’s on-campus statements to students and classroom conduct, the report alleges, may lead an observer “to reasonably conclude that her classroom is not an equal-opportunity learning environment.”

This alleged on-campus conduct is amplified by Wax’s speech outside the classroom, which the report characterizes as putting forth a “pseudo-scientific vision of white superiority.” The report also claims that Wax’s public comments have breached fundamental ethical and research standards through misattribution or misrepresentation.

“I am initiating this disciplinary action because for several years and in multiple instances Wax has shown a callous and flagrant disregard for our University community — including students, faculty, and staff — who have been repeatedly subjected to Wax’s intentional and incessant racist, sexist, xenophobic, and homophobic actions and statements,” Ruger wrote.

The decision to request the formation of the hearing board places Wax’s future at the law school in jeopardy and marks a significant departure from Ruger’s own past public statements in support of Wax’s academic freedom. Wax has been embroiled in a number of controversies over the course of her decades-long career, most recently for her comments that the United States would be better off “with fewer Asians and less Asian immigration” because of Asian support for the Democratic Party.

After the latest controversy, Ruger initially released a statement strongly denouncing Wax’s views while also acknowledging the dangers of sanctioning her for her protected speech.

“The same academic freedom principles that permit current scholars to engage in critical and overdue analysis of this nation’s historical and structural discrimination — despite zealous efforts to censor such speech by some — also apply to faculty like Wax who voice xenophobic and white supremacist views,” he said in an initial statement condemning Wax’s comments while also acknowledging the protections extended to Wax by Penn’s promises of academic freedom. That statement represented the sort of “more speech” approach for which FIRE has advocated.

UPDATE:@Dean_Ruger is willing to cut a great road through tenure & free expression to get at Wax, if it will relieve pressure on the university.

He announced disciplinary proceedings against Wax today — and he’s the complainant.

But Ruger soon reversed course after public pressure and an open letter signed by nearly 2,000 Penn law students and alumni, as well as approximately 500 students from other top law schools. The open letter called for the formation of a committee to reevaluate tenure in order to be “consistent with principles of social equity.” Members of the Philadelphia City Council and Pennsylvania state lawmakers also called for Wax to be punished.

As FIRE has written, if there are genuine concerns surrounding student confidentiality and Wax’s conduct, then Penn may enforce its policies as they relate to those issues. Indeed, in 2018, Penn did sanction Wax by removing her from teaching required courses following her comments about black students’ performance in her classes. But Penn cannot use those policies to pretextually punish Wax for her speech or political views — and much of Wax’s speech described in Ruger’s report concerns her views on issues of political importance. These views, while offensive to many, are undoubtedly protected.

Ruger’s report calls for imposing a “major sanction” against Wax, as stipulated in Penn’s policies and procedures: “termination; suspension; reduction in academic base salary; zero salary increases stipulated in advance for a period of four or more years.”

Universities should take pervasive complaints against faculty members seriously, and conduct falling outside of First Amendment protection — or, at a private university like Penn, protections promised by the university — should be dealt with in a clear and transparent manner. But faculty must not be penalized for their protected expression, especially protected expression outside the classroom.

Unfortunately, Penn is creating a chilling precedent bound to haunt other faculty members by muddying the waters to the point where Penn’s future sanctions against Wax inextricably tie to her protected expression. Allowing punishment for speech based on its viewpoint in even one instance threatens speech from across the political spectrum thereafter.