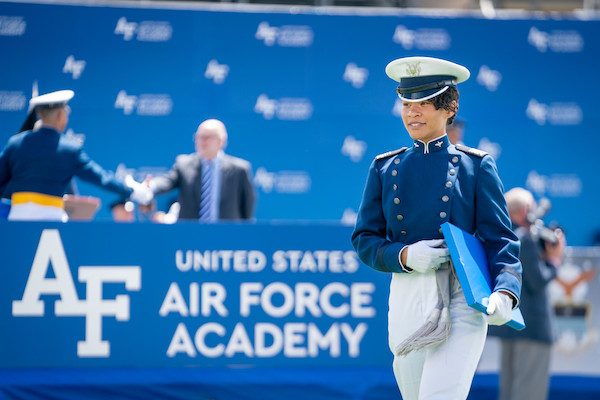 Last week, a civilian instructor at the United States Air Force Academy came under fire from lawmakers in response to her op-ed in the Washington Post defending the inclusion of critical race theory in classroom instruction. In response, the Pentagon has made clear that U.S. military academies remain committed to the academic freedom they currently promise — a move likely to have ramifications for future academic disputes originating at the academies from both the political left and right.

In her July 6 op-ed, USAFA professor Lynn Chandler Garcia wrote, “I teach critical race theories to our nation’s future military leaders because it is vital that cadets understand the history of the racism that has shaped both foreign and domestic policy.” In the days following the op-ed, Sen. Tom Cotton, Rep. Mark Green, and others called publicly for Garcia’s removal and the banning of critical race theory from military academies. USAFA calls itself “both a military organization and a university,” and representatives from the Department of Defense and USAFA have both issued statements in response to the lawmakers’ entreaties which affirm the school’s dedication to challenging its students through the free exchange of ideas in the classroom.

The uproar followed remarks from Army General Mark A. Milley, chairman of the Joint Chiefs of Staff, before Congress on June 23, 2021, in which he expressed his belief that military leaders should understand critical race theory. Milley told Congress, “I do think it’s important, actually, for those of us in uniform to be open minded and be widely read.” He reminded congressional leaders that “the United States Military Academy is a university.”

USAFA and other military academies have, by their own choice, committed themselves to upholding academic freedom.

Critical race theory has recently ignited a great deal of passionate public discourse. The school of thought has existed for decades within legal scholarship, and in a broad sense deals with examining facially race-neutral social structures for their impact on racial inequity. More recently, these three words have become a shorthand for many ideas about race relations in the United States, and under the “CRT” label they have consequently become the subject of scrutiny and legislation by lawmakers at both the state and federal levels of government.

Two weeks after Milley’s public statement, Garcia joined the general in defending the teaching of critical race theory in our military academies: “Cadets, like all military members, take an oath to defend the Constitution with their lives — so it is crucial they have a sensitive understanding of that Constitution.” A professor of political science, Garcia makes clear that she believes her students must be able to view challenges they may encounter in the system into which they have enlisted through a lens that acknowledges that, although “[t]he military was among the first institutions to desegregate and has a celebrated history of diversity in its ranks . . . that history has long been complicated.” Garcia is not a military officer; she has a Ph.D. in political science and has been an associate professor at USAFA since 2017. She is among the roughly 25 percent of full-time faculty who are civilian instructors, as opposed to active duty military, a ratio USAFA has tried to maintain since opening teaching positions to civilians in the 1990s.

Critical Race Theory teaches that the principle mechanism to righting past racial discrimination is to discriminate on the basis of race. This is unlawful. No professor of the @AF_Academy should promote breaking the law. She should be removed immediately.https://t.co/vXtqQJwTSl

Garcia’s op-ed attracted the ire of politicians who take issue with the idea of critical race theory being taught at USAFA. On July 7, the day after Garcia’s op-ed appeared, Rep. Mark Green of Tennessee tweeted: “Critical Race Theory teaches that the principle mechanism to righting past racial discrimination is to discriminate on the basis of race. This is unlawful. No professor of the @AF_Academy should promote breaking the law. She should be removed immediately.” Green then wrote directly to the Secretary of the Air Force to demand that Garcia be fired.

Sen. Tom Cotton of Arkansas also called for Garcia’s termination in an appearance on Fox News the same day. During that interview, Cotton suggested that lawmakers should “exercise some oversight of what’s being taught to our cadets at the service academies” and expressed his intention to have a conversation with Lt. Gen. Richard M. Clark, superintendent of USAFA, about his concerns.

Rep. Doug Lamborn of Colorado, who is also a member of the USAFA Board of Visitors, issued a press release announcing his opposition to Garcia’s pedagogy: “Critical race theory is an anti-American ideology rooted in Marxism and has no place in any of our service academies.”

Reps. Chris Stewart of Utah and Mike Waltz of Florida expressed similar sentiments in interviews published in the Washington Free Beacon on July 7.

The Pentagon responded to the public outcry over Garcia’s op-ed by making strong statements in defense of academic freedom. Assistant to the Secretary of Defense for Public Affairs John Kirby told Politico on July 8, in the wake of the criticism of Garcia’s op-ed: “We expect our professors to challenge the minds of future leaders, and we respect their academic independence.” USAFA also provided a statement defending academic freedom and the inclusion of CRT in its classes to Fox & Friends over the weekend:

The U.S. Air Force Academy supports an instructor’s responsibility to challenge students and to do so in an environment of academic freedom. While some elements from CRT canon are included in the course to encourage critical thinking, it is not a theory endorsed by the institution as institutional doctrine.

When the host presented this to Lamborn during his appearance on the show on Monday, Lamborn took the position that critical race theory disparages the history of the United States, that learning it in U.S. military academies will necessarily have a negative impact on morale, and indicated that Congress can take action to prevent its teaching: “when the funding for the Air Force comes up . . . this is one of the things we’re going to look at.”

Academic freedom requires that faculty members have substantial breathing room to determine how to approach subjects and materials relevant to their courses.

The calls from Green and others for Garcia’s firing, and the suggestions by Cotton and Lamborn that Congress can take direct control over what professors teach in the classroom, are clearly contrary to the express position the Pentagon and its academies have taken with regard to academic freedom. The lawmakers who weighed in on Garcia’s op-ed may not appreciate (or possibly even be aware) that the USAFA and other military academies have, by their own choice, committed themselves to upholding academic freedom, based on the belief that the institutions, the future officers they train, and the services themselves ultimately benefit from leaders who were free to engage in the intellectual exploration of ideas that is possible only in an environment of academic freedom.

Garcia, coincidentally, has written at length about how the military’s academic institutions approach academic freedom. As Garcia pointed out in an October 2020 article predating this controversy, the USAFA, the U.S. Military Academy, and the U.S. Naval Academy have each adopted the American Association of University Professors’ 1940 Statement of Principles on Academic Freedom and Tenure in their faculty handbooks, which represents the standard model of academic freedom in the United States. The AAUP 1940 Statement provides, in relevant part:

Teachers are entitled to freedom in the classroom in discussing their subject, but they should be careful not to introduce into their teaching controversial matter which has no relation to their subject.

Academic freedom requires that faculty members have substantial breathing room to determine how to approach subjects and materials relevant to their courses. While this discretion is not infinite — to take just one example, they may not engage in unlawful discrimination or harassment of students — it most certainly does include the right to teach about concepts or subjects that some, many, or even most students find upsetting or uncomfortable. The 1970 interpretive comments to the AAUP’s 1940 Statement’s provisions on academic freedom make this clear: “The intent of this statement is not to discourage what is ‘controversial.’ Controversy is at the heart of the free academic inquiry which the entire statement is designed to foster.” If academic freedom does not include currently controversial topics like critical race theory, then the promise of academic freedom is meaningless.

It is entirely possible to imagine a scheme of national military academies that has not committed itself to academic freedom for its instructors. Indeed, it’s likely that most countries across the globe have precisely such a system. But in the United States, our military academies have expressly made such commitments, and it is incumbent on them to honor them as long as they are in place, regardless of political pressure. While today the pressure may come from those on the political right, tomorrow those on the left may find something at a military academy to which they object. By defending academic freedom at its academies regardless of the source of challenges to it, the Pentagon has the opportunity to set an example for sticking to principle, which will prove beneficial not just for future military officers but for administrators at our nation’s colleges and universities at large.