FIRE > Newsdesk > Top Story > President Trump: ‘Listen to the other point of view’ 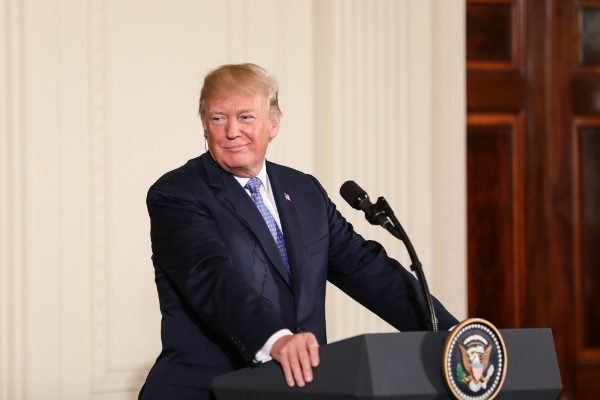 Mostly unremarked upon in the coverage of President Trump’s Thursday signing of an executive order aimed at protecting free speech on campus were the unscripted comments with which he concluded the ceremony. Aiming his remarks at the group of college students in attendance, President Trump said, with regard to discussing their opinions on campus,

[Y]ou get that point of view across. And listen to the other point of view. Maybe you can be changed, and maybe not. I doubt it — [laughter] but maybe. You never know. And you know what? If you can, that’s okay. And you’ll change them too! You’re gonna change them too. But ultimately, it brings people together, so, congratulations, I’ll sign right now.

(The comments start around the 21:50 mark in the linked video.)

President Trump’s reminder of the importance of open discussion and debate on campus is precisely the sort of message college students, regardless of their political or ideological beliefs, need to hear. Just as importantly, at a time when tensions are high among partisans of all political persuasions, it is a great reminder that respect for the value of free speech is one of those rare issues on which all sides have some common ground. Indeed, back in 2015, at a town hall held at an Iowa high school, President Obama made comments of a very similar nature to the assembled students, saying,

Anybody who comes to speak to you and you disagree with, you should have an argument with them. But you shouldn’t silence them by saying, ‘You can’t come because, you know, I’m too sensitive to hear what you have to say.’ That’s not the way we learn either.

As Presidents Trump and Obama are not exactly known for their wide areas of agreement, it’s worth sitting up and taking notice when they do agree. It’s also a testament to the importance of the issue of free speech on college campuses that our nation’s current and immediate past Presidents have both seen fit to weigh in on the subject. (Do you prefer legislators to Presidents? I give you Sens. Mitch McConnell and Bernie Sanders.) That doesn’t mean that all of these leaders will agree with one another (or with FIRE) on what constitutes free and meaningful debate and discussion, and one would expect their policies to reflect those differences. But it does mean that, at least on this issue, our nation’s opposing “teams” have more in common than they might think.