Late last year, Georgetown University’s Main Campus Executive Faculty, “a legislative body made up of representatives from the schools of the Main Campus,” overwhelmingly passed a motion calling on the university to “[d]evelop and publicize alternatives to Zoom so that it no longer enjoys a monopoly as on-line classroom platform and meeting platform at Georgetown.”

The motion also called for an advisory committee to determine if “Georgetown University’s contract with Zoom indeed allows Zoom to censor academic content” and, if it does, offer recommendations “to preserve academic freedom.” 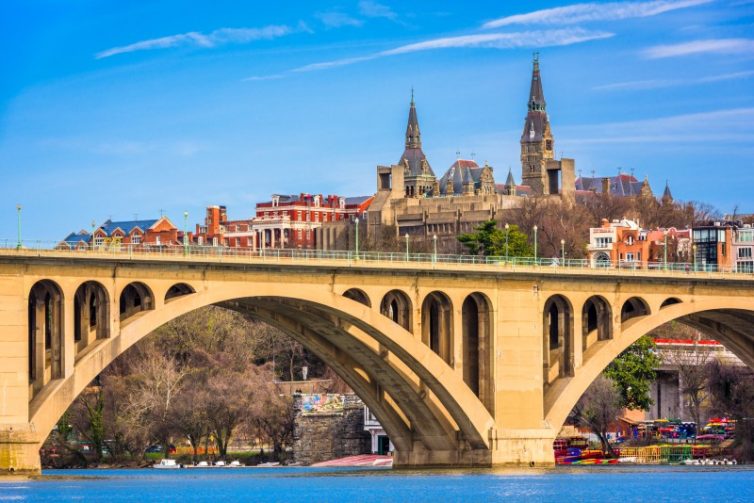 Faculty at Georgetown University in Washington, D.C., have been on the forefront of addressing concerns about Zoom.

As concerns about Zoom’s prevalent use in higher education have accumulated in recent months, more faculty bodies around the country should consider pressing their universities to investigate their reliance on Zoom and the impact it may have on academic freedom.

The discussion at Georgetown was prompted by a resolution from James Millward, professor of inter-societal history at the Walsh School of Foreign Service. Millward’s resolution, included in full in the meeting minutes, asserts that it was necessitated by “repeated cases of the Zoom Corporation violating freedom of speech and academic freedom by unilaterally shutting down meetings, including campus meetings by university faculty and approved by universities as campus events.”

“As concerns about Zoom’s prevalent use in higher education have accumulated in recent months, more faculty bodies around the country should consider pressing their universities to investigate their reliance on Zoom and the impact it may have on academic freedom.”

FIRE, joined by NCAC and PEN America, first wrote to Zoom on June 15 after reports surfaced accusing the company of shutting down events and users outside of China because they held calls commemorating the Tiananmen Square Massacre.

Zoom issued a statement on June 11 promising that, going forward, it would no longer honor requests from China’s government to take down accounts outside the country. But Zoom’s response left unaddressed many concerns about the company’s respect for free expression. For one, will Zoom actively monitor events that seemingly have the potential to violate local censorship laws? And as a company that advertises its product specifically to higher education institutions, can Zoom still credibly serve that purpose if users will be blocked for taking part, or being present, in basic academic discussion? Can Zoom commit to not removing students from university or faculty-hosted academic events? Our June 2020 letter asked these questions.

But Zoom didn’t respond. And in December, troubling new details emerged from a complaint unsealed by federal prosecutors.

Prosecutors accused China-based Zoom executive Xinjiang Jin of following Chinese officials’ directives to censor at least four users outside China because of their Tiananmen-related activism. Jin was also accused of coordinating “with others to create fake email accounts to falsify evidence that meeting participants were supporting terrorism and distributing child pornography.”

Concerns about Zoom’s safety and security and its relationship to China are especially pressing considering Hong Kong’s National Security Law. The law, which FIRE has discussed at length, is intended to chill global speech — including in academia — about China. Faculty around the world are currently working to protect students studying sensitive material from facing repercussions if they return to or travel to mainland China or Hong Kong. Can they confidently use Zoom?

The other example Millward cites, Zoom’s refusal to allow events with Leila Khaled, has also been under the spotlight from FIRE and NCAC. Khaled is known for being the first woman to hijack an airplane. She did so in support of the Popular Front for the Liberation of Palestine, a group the U.S. Department of State deems a foreign terrorist organization.

SFSU president Lynn Mahoney, however, resisted the censorship demands. She wrote: “[T]he university will not enforce silence — even when speech is abhorrent. What sets a university apart from primary or secondary education is that the views of our faculty are not prescribed, curtailed or made to conform to content standards.”

The cancellation of Khaled led to a domino effect. Citing anti-terrorism laws, Zoom then canceled events at New York University, the University of Hawaii at Manoa, and the University of Leeds in the United Kingdom that were planned in response to the SFSU cancellation. As FIRE’s Adam Steinbaugh explained at the time, assertions that simply hosting an online discussion with Khaled constitutes material support of terrorism, and is therefore prohibited under federal law, are suspect at best.

And as NCAC wrote about the Khaled incident, “If support for free speech means anything, it means allowing unpopular people to speak, unless it is clear that their speech is unprotected.” This principle should apply regardless of the speaker, a point FIRE has made when campuses have faced censorship demands over invitations to controversial figures like Weather Underground co-founder Bill Ayers and political activist and professor Angela Davis.

Unlike public universities, Zoom is not bound by the First Amendment and can refuse to allow some speech or speakers on the basis of their views, whether they’re dissidents outside China or faculty members hosting Leila Khaled. But while education continues to primarily take place online, universities should be careful about putting all their eggs in one basket, so to speak, if that basket has made clear that it might reject some of those eggs.

For that reason, other faculty bodies around the country should consider following Millward and Georgetown’s lead and press for answers about their universities’ contracts with Zoom, their reliance on the service, and alternatives in light of the possibility that Zoom could shut down a class, speaker, or event.

As Millward rightly argues, “Zoom assures universities that it honors academic freedom, but if it can, whenever faced with third party political pressure, unilaterally assert that this law or that law necessitates its censorship, then such assurances are meaningless. Contracts must have teeth to assure proper service from Zoom, just as they would from any other contractor.”