For nearly a year, Mary Beth Tinker’s home away from home was a 23-foot-long RV named Gabby. Plastered across Gabby’s side was an illustration of a large magenta wave carrying the words “speech, press, petition, religion, assembly” towards three waving children on a school bus. A white peace sign and a bold speech bubble for each student (one voicing “civics education!”) artfully summed up Tinker’s mission: It was the fall of 2013, and the student rights advocate was traveling the nation with Student Press Law Center attorney Mike Hiestand, on a Tinker Tour. Their goal? To promote civics and encourage students to know and use their rights.

“Mike and I knew that students needed encouragement, so we came up with the idea to speak in schools throughout the country,” Tinker told me last month.

As an eighth grader in 1965, the Des Moines, Iowa, native was punished for wearing a black armband to school in mourning of the fallen on both sides of the Vietnam War. This eventually led to the landmark Supreme Court decision Tinker v. Des Moines Independent Community School District (1969), which held that public school students do not “shed their constitutional rights to freedom of speech or expression at the schoolhouse gate.”

Tinker, who is also a pediatric nurse, inspires young people with the story of her fight for students’ right to free expression which began at the tender age of 13 — from her stand in the classroom to her legal battle in the courts. Stocked with black armbands and free speech-related coloring books for the students, she also shares narratives of how today’s young people are breathing life into the First Amendment. Her goal is to generate enthusiasm for civics and young voices —  for, as she states, “we live in mighty times” and “mighty times are not a time to be silent.” 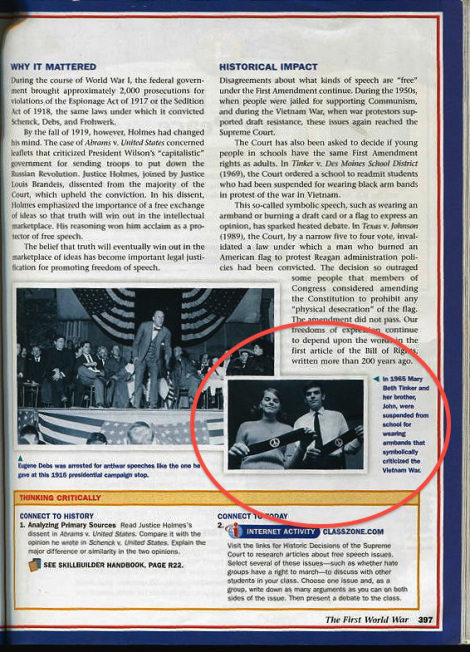 The 1969 Supreme Court case Tinker v. Des Moines is discussed in most history and civics textbooks used in American schools today, like this one, Houghton Mifflin’s “The Americans: Reconstruction to the 21st Century.” (Courtesy the Tinker Tour.)

“Now is an important moment in our history, especially for young people whose voices are too often under attack,” she said. “Students need to hear stories of other youth who, throughout history and today, have made a difference by bringing the Constitution to life. And we need to hear those stories as well.”

Fittingly, it was at the 2017 National History Day Contest in June that I met up with Tinker. As a judge, she eagerly listened to stories of other figures like her who took important stands in history — stories from students who, through their comprehensive research and initiative, fulfilled Tinker’s hopes for an inspired youth.

It’s students like those at the NHD contest who Tinker says fuel her optimism. She also told me she remains “heartened by the many young people who really want to have a voice and speak up about many issues.”

Whereas she and her siblings used simple armbands to champion their cause and further students’ rights, young people today are finding new speech tools, like online platforms, to contribute their ideas to the marketplace and engender change.

Still, what concerns Tinker and motivates her to speak around the country are the “numerous issues that youth are dealing with, along with a lack of support for civics and civics teachers in high schools.” For her, civics currently “is not the priority it should be. There are many devoted, committed, and energetic teachers who are teaching civics and doing a good job with it, but they need support.”

“Students are saying that they don’t want more tests,” she said. “Instead, they want to put civics into action through various kinds of civic engagement. The National Council of Social Studies advocates this as part of an effective civics curriculum. When there’s a lack of that, then sure, we’re going to see a problem in colleges and also in the adult population who don’t ever go to college.”

In particular, Tinker emphasized student journalism as a key means to practicing civic involvement and interacting with one’s rights. 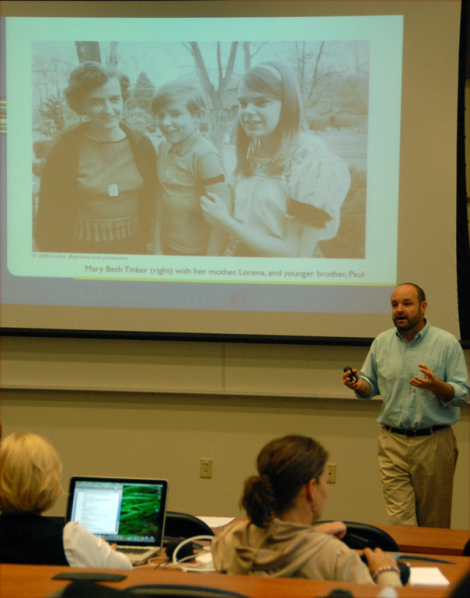 “Free press, free speech, and the right to assemble are all related to being civically engaged,” she added.

On her tour, Tinker advocates for this type of student involvement with First Amendment freedoms, encouraging students to seek out experiences in which they can test the strength and importance of their rights. In turn, she personifies a remedy for deficient civic education. Speaking to young people at a myriad of venues — from elementary schools to churches, youth detention facilities to national conventions — Tinker motivates students to exercise their First Amendment rights via thoughtful discourse on pertinent issues of the time.

Today, Gabby the RV has been “retired,” and Tinker does not find herself on the road as often as before. Yet her passion as a students rights advocate hasn’t waned. She still visits schools in the fall and spring, in addition to speaking with students via Skype and helping with events like the National History Day Contest. Her spirit and commitment to free expression are steadfast. She remains resolute in her conviction that students like us “have to be able to honor all opinions, meeting voices with other voices.”

As she asserted, “We can’t look to censorship, because censorship goes against basic democratic principles, and we might be censored next.”

Few can call themselves a free speech icon by age 13, let alone a litigant of a landmark Supreme Court case during high school. Tinker is both, but her humility, warmth, and amiability are the most inspiring. As we sat together amidst the buzz of young NHD enthusiasts, she imparted an essential message to today’s students:

“Join together. Seek the help of groups like FIRE, the ACLU, the Student Press Law Center, and other groups that want students to speak out and are advocating for your rights. Use your wonderful creativity and initiative to think of how you can prevail and have your voices heard.”

Katherine Hung is a rising sophomore at Harvard University and a FIRE summer intern.