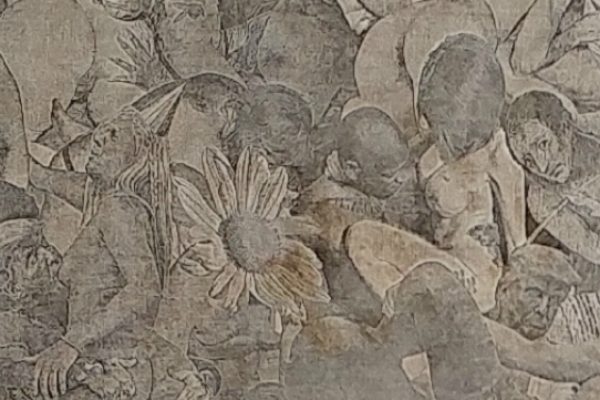 Just in time for Sunshine Week 2019, which celebrates transparency and access to public information, a newly-released batch of records reveals that Polk State College appears to have contacted law enforcement to review artwork a professor submitted to a faculty arts show.

Under Florida’s Sunshine Law, attorney Hayden Barnes (whose name long-time FIRE supporters might recognize) requested from Polk State records “related to Polk State College’s response to the submission of a piece of art known as ‘Death of Innocence.’”

Barnes’ March 11 request came months after FIRE and the National Coalition Against Censorship wrote to Polk State President Angela Garcia Falconetti on Feb. 14, 2018 to express concerns about the college’s rejection of artwork from part-time faculty member Serhat Tanyolacar (another name likely to be familiar to fans of FIRE’s work) on the basis that it was “too controversial to display at this time.”

Tanyolacar’s piece, “Death of Innocence,” depicts several poets and writers juxtaposed with a number of altered images of President Donald Trump and other political figures engaging in sexual activity. According to Tanyolacar, the work is meant to highlight “moral corruption and moral dichotomy” and provoke debate.

Polk State Program Coordinator Nancy Lozell informed Tanyolacar on Feb. 6 that it would not be displayed at a then-upcoming faculty art exhibition because the college “offers classes and volunteer opportunities to our collegiate charter high schools and other high schools in Polk county and we feel that that particular piece would be too controversial to display at this time.”

Polk State refused to allow Tanyolacar’s work to be shown at the exhibition and failed to respond to FIRE and NCAC’s letter to justify its reasoning. However, emails produced on March 1, 2019 in response to Barnes’ records request offer insight into the college’s decision making — and suggest that rather than respond to FIRE and NCAC’s letter, the college sought a review of the artwork by law enforcement and turned to public relations services.

On Feb. 23, 2018, Florida attorney Drew Crawford emailed Falconetti “a draft letter… regarding the ‘Death of Innocence’ matter” and explained that he “feel[s] that we have a good legal ground to stand on if we should ever be required to make our case.” The subject line read: “Proposed Legal Opinion and Response to Censorship Allegations.”

You have requested our legal opinion regarding Polk State College’s determination to reject the artwork entitled “Death of Innocence” (the “Work”) from inclusion and display as part of the College’s “Faculty Art Show” exhibit (the “Art Exhibit”). In brief sum, after consideration of the facts surrounding the College’s determination, a brief review of the Work, review of pertinent cases and decisions, and discussions with local law enforcement officials, it is our opinion that Polk State College is not required by the First and Fourteenth Amendments to the United States Constitution to include the Work in its Art Exhibit. Further, applying local community standards, the Work appears to be obscene and, as such, likely does not enjoy any First Amendment protection.

Earlier this week, we understand that you and several other College administrators met with the Polk County Sheriff and an Assistant State Attorney for the Tenth Judicial Circuit to discuss the Work. We understand that both the Sheriff and the Assistant State Attorney have stated that they view the Work to be obscene material and that they intend to enforce Florida’s obscenity statute in the event that the Work is displayed to the general public without restriction.

Without question, the Work is an overt depiction of sex acts being committed by national politicians, including the President of the United States. Art is often in the of the beholder, but, as Justice Potter is known for saying, “I know [obscene material] when I see it.” Jacobellis v. State of Ohio, 378 US. 184, 197 (1964)(Potter, J., concurring). You are certainly entitled to rely upon the wisdom and advice of the County Sheriff and the State Attorney’s Office in determining if the local Polk County community would view the Work as obscene material. Given that law enforcement has opined that the Work is obscene, we feel constrained to advise you of the same.

Based on the foregoing, Polk State College is not required to display “Death of Innocence” – or any other work of art for that matter – in its LTB Fine Arts Gallery. A government’s decision to display or not display a particular piece of art in a nonpublic forum is not subject to the First Amendment. Further, given the overtly sexual nature of the Work in question, and the advice the College has received from local law enforcement officials, there appears to be reason to believe that the Work is an obscenity and, as such, the Work does not in and of itself appear to be entitled to First Amendment protection.

So, according to the firm that has served as general counsel for the college, Polk State’s president and other administrators chose to meet with the Polk County Sheriff and an Assistant State Attorney for the Tenth Judicial Circuit to determine whether a faculty member’s artwork constituted obscenity — and were advised that the work appeared to be obscene and that police would “enforce Florida’s obscenity statute” should it be displayed.

For the record, this assessment is inconsistent with the narrow definition of proscribable obscenity established by decades of Supreme Court jurisprudence. Expression that is “obscene” and therefore unprotected by the First Amendment must meet the exacting test announced by the Supreme Court in Miller v. California, 413 U.S. 15 (1973), which offers three questions that must be answered when determining if a work is obscene:

The artwork addressed in this case does not meet this test. If Polk State and its local police believe that Tanyolacar’s visual depiction of sexual activity intended as political commentary is “obscene” and unprotected by the First Amendment, then I would suggest that they avoid libraries, galleries, and movie theaters or, at the very least, purchase highly effective blindfolds.

This week, FIRE sought clarification from Chief Assistant State Attorney for the 10th Judicial Circuit Jacob Orr and the Polk County Sheriff’s Office on the alleged meetings between Polk State and law enforcement. Orr reported that his “office has no records related to this matter” and that he “cannot confirm or deny the meeting.” The Polk County Sheriff’s Office has not yet replied to FIRE’s request for records or comment, but we will provide an update if a response is provided.

McHugh confirmed that the “matter qualifies” for public relations assistance and was pre-approved for up to $15,000 or more. A Polk State administrator then confirmed that the college had reached out to an approved crisis communications firm. (In the future, colleges and universities should consider voicing their support for free expression as an effective public relations strategy.)

Ultimately, the records reveal a number of interesting — and concerning — decisions made by Polk State in the aftermath of its decision not to display Tanyolacar’s “too controversial” work. Most important, though, is the college’s apparent decision to contact law enforcement to review a faculty member’s creative work. (When FIRE explained in our 2018 art censorship report that the best response to controversial artwork is more speech, reports to law enforcement are not exactly what we had in mind.)

If Polk State’s first response to controversial artwork is to inform law enforcement, its students and faculty should consider asking the college some difficult questions about how frequently the college has done so in the past, and under what circumstances it is likely to do so again.

Finally, there’s one more important lesson to be learned: Records requests can offer an important tool in learning about universities’ internal decision-making when it comes to controversial expression. Thanks to Hayden Barnes for sharing his findings, and happy Sunshine Week!