Censorship at UK universities is on the rise for the third year in a row, with a whopping 94 percent of universities censoring speech to some degree, according to the latest Free Speech University Rankings (FSUR) report from British publication spiked.

The magazine once again uses a FIRE Spotlight–inspired traffic light ranking system to flag schools that either censor or chill campus speech. 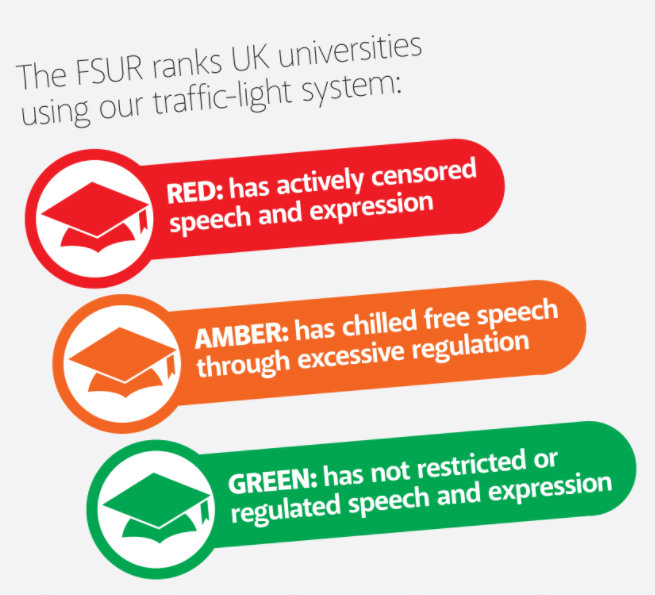 The ‘spiked’ traffic-light system was inspired by FIRE’s own ‘Spotlight’ system for ranking American speech codes.

This year, an analysis of “policies and actions” on 115 campuses showed an uptick in a variety of censorious behavior, including a record 63.5 percent of UK schools earning spiked’s worst, “red” rating. That number is up more than 20 percent since the publication’s first annual report back in 2015. Equally worrying, the number of speech-friendly “green” schools are down from 20 percent in 2015 to a meager 6 percent this year.

spiked also reports on a variety of campus speech trends, noting that while calls for censorship used to come chiefly from students via student unions, “[u]niversity administrators are becoming more and more censorious.”

But student unions (basically the British equivalent of student governments in the U.S.), spiked said, are still the driving force behind a variety of campus bans, including silencing a variety of speakers and student societies, newspapers, advertisements, and banning “offensive” costumes.

The report also releases updated numbers of problematic administrative policies, including the statistic that a whopping 44 percent of UK schools have “no platform” policies that ban “fascist, racist and Islamist” groups.

For more on the state of campus speech in the UK, check out spiked’s full report.