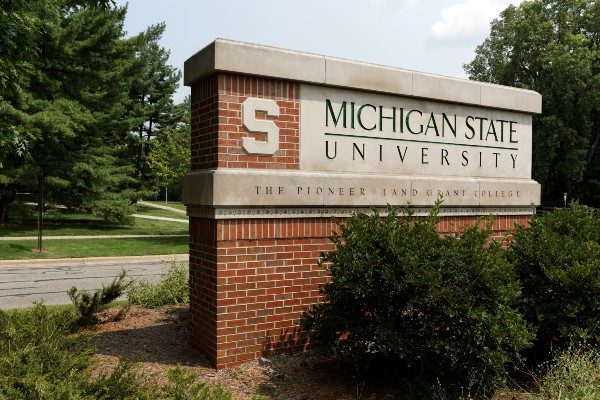 The Q&A took place on Feb. 18 through a third party website, Slido, through which students could submit questions and comments — and do so anonymously, as noted in media coverage ahead of the event.

Screenshots of some anonymous comments were later shared with The State News and on Twitter:

The remarks criticized, in racial terms, some of President Stanley’s critics and students simply posing questions to Stanley, leading the Black Students’ Alliance to condemn the remarks.

The ASMSU said in a statement that it had “contacted MSU Police for an investigation and Slido for IP address recognition of the racist comments submitted.” ASMSU’s president reportedly told The State News that police followed up on that request:

According to the Associated Students of Michigan State University, or ASMSU, President Mario Kakos, police were contacted and are trying to obtain IP addresses of the users who posted the comments on the event’s platform, Slido.

At least one of the anonymous comments appears ambiguous, and could be read as a condemnation of law enforcement (particularly the East Lansing Police Department) as a racist institution, comparing police violence to our nation’s history of lynching:

For example, even assuming that the anonymous “police is your noose” commentator sympathizes with law enforcement, the post doesn’t amount to a “true threat” unprotected by the First Amendment. If, on the other hand, the commenter is criticizing police, his or her right to anonymity is what protects them from retaliation by the very police department now called on to unmask them.

Today, FIRE sent a letter to the MSU Police Department, asking them to clarify whether they are investigating the anonymous commenters and, if so, asking them to end any such investigation. You can read our letter explaining in greater detail how the First Amendment protects anonymous speech online below.

[Update, Feb. 25, 2020: The MSU Police Department responded to our letter, confirming that they will not seek to learn the identities of the anonymous commenters. Chief Roudebush responded:

Thank you for reaching out to me directly. The quote you referenced regarding the MSUPD seeking to obtain IP addresses was incorrect. The person quoted does not represent our office. We were called to respond to this incident by participants. Upon reviewing the information posted during the event, we quickly determined it was not criminal in nature for all the reasons outlined in your letter. We have not sought to obtain IP addresses for participants and will not be doing so. The MSU Police Department is not investigating this incident, beyond the initial review done which determined it was not a criminal incident.

That is the correct conclusion, and we’re relieved that the MSU Police Department reached it and communicated it to us. If allowed to stand uncorrected, the reports on how MSU law enforcement officers were responding would have chilled anonymous, protected speech, even if those reports were inaccurate. The MSU Police Department’s categorical explanation that it has not investigated and will not investigate this speech is important to mitigating that chilling effect. The department’s quick, thorough response here reflects a welcome and necessary dedication to freedom of expression.]