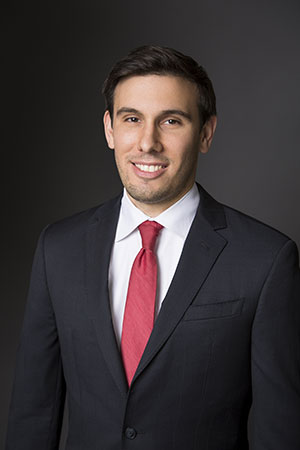 Nico Perrino is FIRE’s Executive Vice President and the creator and host of FIRE’s So to Speak: The Free Speech Podcast. Prior to his current role, he led FIRE’s Communications department for nearly a decade, most recently as its Senior Vice President of Communications.

Nico previously worked in the Communications department at the Institute for Justice. His writing has been featured in USA Today, Politico, Newsweek, and The Guardian, and he regularly travels the country to speak about free speech and civil liberties issues.

As a documentarian, Nico was Co-Director and Senior Producer of “Mighty Ira: A Civil Liberties Story” (2020), a feature-length film about the life and career of former ACLU Executive Director Ira Glasser. He worked as Creative Consultant on “Can We Take a Joke?” (2015), a film about censorship in stand up comedy.

Nico graduated from Indiana University-Bloomington (IU) with a bachelor’s degree in journalism and history. While at IU, he was a member of the track & field team and served as editor-in-chief for the Indiana Standard and as a reporter and columnist for the Indiana Daily Student.

Originally from Chicago, Nico now lives and works in the Washington, D.C. area.

“Publicity is justly commended as a remedy for social and industrial diseases,” said the late Supreme Court Justice Louis Brandeis. Whether you are a citizen trying to reveal corruption at city hall or a student fighting to reform your campus’ speech codes, working with the media can be your most powerful tool to expose an injustice and effect meaningful change. This 50-minute talk will help you gain an in-depth understanding of how today’s media industry works and learn the skills, tactics, and philosophy that FIRE employs to generate positive media coverage for its cases and initiatives. After this talk, attendees will be well-equipped to prepare their own on- or off-campus media campaigns.

The First Amendment: A Primer for Students

In this 50-minute talk, Nico provides a brief overview of what the First Amendment’s free speech provision protects, before he addresses the fundamental question of why America has a First Amendment in the first place. Too often support for free speech rests upon an incomplete and circular argument that free speech is important because it’s protected by the First Amendment. But why does our Constitution protect the rights of members of the Westboro Baptist Church to broadcast their hateful messages? The neo-Nazis to march down the streets of Skokie, Illinois? Or one individual’s right to burn the American flag? Nico will seek to answer these questions in plain English before using real-world examples to explore how students’ free speech rights change after they graduate from high school and move on to college—and how they can ensure those rights are protected.

Current Trends in the Fight for Free Speech on Campus

In this 25-minute talk, Nico provides a brief overview and analysis of current trends surrounding free speech on campus before making the philosophical argument for free speech generally.