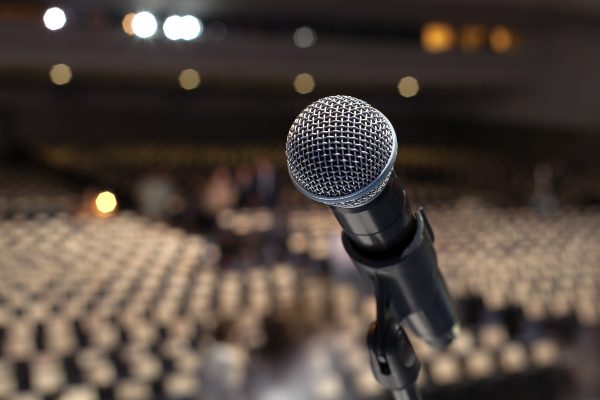 Use: Beyond use during digital or in-person orientations, this lesson can be a tool to teach student government members and student organization leaders about how the university can and cannot respond to controversial speakers.

Let’s take a look at a common situation on college campuses: An outside speaker is invited to deliver a speech on campus. During your time here, you’ll have the opportunity to engage with different academic departments, join an array of extracurricular activities, and even start new student groups. With this right to freely associate with people of your choosing comes the right to invite and listen to speakers of your group’s choosing. As a public university, like the state and federal governments, we cannot discriminate against certain viewpoints or content—which means, for example, that we cannot disinvite speakers because we disapprove of what they might say. [1] Keep in mind that invited speakers do not represent the university’s views, they only represent themselves—and that as a student, you are free to invite speakers that you’d like to hear.

In this skit, you’ll see students grappling with how to respond to a speaker invited to campus by a student group whose ideas they oppose. While watching this scene, I encourage you to think about the role of academia in testing ideas through debate, logic, and the scientific method. How can we respond to viewpoints we find upsetting in a way that benefits the community at large and furthers the pursuit of truth? How can we intelligently combat questionable ideas by hearing them and pointing to their logical shortfalls?

Number of Actors: 2
Set up: None
Script:

Student A: Did you hear who’s speaking on campus next week?

A: Some idiot who says vaccinations are dangerous. It’s all anti-vax propaganda. It’s irresponsible of the university to let them speak here. Encouraging people to go unvaccinated is exactly how diseases spread! We should go and rip the microphone out of their hands.

B: Well, I don’t know. What would that accomplish? Do you think shutting them up will make their supporters change their minds?

A: Well, maybe not. . . either way they shouldn’t be allowed to speak!

B: I also hate everything they stand for, but what happens if you disrupt the talk? It just gets them more attention and makes them into martyrs.

B: Well, all the more reason, then, to let them speak. It’s the only way to actually confront their claims.

A: Fine, but everyone who attends that speech should be quarantined.

B: I don’t think you can assume everyone in the audience actually agrees with them. It might actually be good to go so we can write an op-ed for the student newspaper about all of the misleading arguments they make. Maybe we can even pass out some scientific literature outside the event or hold a counter protest.

A: Maybe you’re right. Let’s bring these ideas to our next club meeting and go talk with the folks over in the student activities office about the steps to secure space for a counter protest.

What I hope you take away from this skit is that the antidote to speech you disagree with is more speech. Dialogue and debate are how you change hearts and minds. During your time here at [university name] I encourage you to pursue your passions, and when they run contrary to someone else’s, to use the experience as an opportunity to hone your own arguments.

Trying to prevent someone from speaking only gives more power to their words. When acts of censorship—such as shutting down a speech—occur, it often has the opposite of the desired effect. You’ve probably seen this in the news in the last few years. As many of your parents may have learned, telling inquisitive minds not to do something, or not to listen to something, only heightens their interest. Censorship not only raises the profile of the speaker and widens their audience, it also denies those critically listening to their speech a crucial opportunity to find holes in the speaker’s arguments.

Because we are a public university, and thus bound by the First Amendment as government actors, we have an obligation to allow room for a wide range of ideas and we must apply our policies in a viewpoint-neutral way. [2] We know that you are adults, and we are not here to micro-manage your education, to make value judgments for you, or to shield you from ideas. The university stands for wide-open discourse on issues large and small. We hope that instead of backing away from difficult conversations or controversial ideas, you acquire the confidence and ability to engage with them. It is up to you to form your own opinions and challenge one another through civil discourse. Next, we’ll watch President Obama talk about the value of an intellectually diverse community.

When I went to college, suddenly there were some folks who didn’t think at all like me. And if I had an opinion about something they’d look at me and say “well that’s stupid.” Then they described how they saw the world, and they might have had a different sense of politics, or they might have a different view about poverty, or they might have a different perspective on race. And sometimes their views would be infuriating to me, but it was because there was this space where you could interact with people who didn’t agree with you and had different backgrounds than you that I then started testing my own assumptions. And sometimes I changed my mind. Sometimes I realized, “you know what, maybe I’ve been too narrow-minded,” “maybe I didn’t take this into account,” “maybe I should see this person’s perspective.” So, that’s what college, in part, is all about. The idea that you’d have somebody in government making a decision about what you should think ahead of time, or what you should be taught, and if it’s not the right thought, or idea, or perspective, or philosophy that that person wouldn’t get funding runs contrary to everything we believe about education. I mean, I guess that might work in the Soviet Union, but it doesn’t work here. That’s not who we are, that’s not what we’re about. Now, one thing I do want to point out is it’s not just sometimes folks who are mad that colleges are too liberal that have a problem, sometimes there are folks on college campuses who are liberal, and maybe even agree with me on a bunch of issues, who sometimes aren’t listening to the other side. And that’s a problem too. I was just talking to a friend of mine about this, you know, I’ve heard some college campuses where they don’t want to have a guest speaker who is too conservative, or they don’t want to read a book if it has language that is offensive to African Americans, or somehow sends a demeaning signal towards women—and I gotta tell you I don’t agree with that either. I don’t agree that you, when you become students at colleges, have to be coddled and protected from different points of view. I think that you should be able to—anybody who comes to speak to you and you disagree with, you should have an argument with them. You shouldn’t silence them by saying “you can’t come because I’m too sensitive to hear what you had to say.” That’s not the way we learn either. So, what do you think? He said “amen.” All right, okay.

What President Obama is describing is the value to be found in a community that embraces, rather than shuts down, disagreement. College is intended to be a place for growth, where your ideas should be tested, your debate skills refined, and your critical thinking abilities challenged and sharpened. These skills are vital for learning how to separate truth from fiction for yourself.

When you face scenarios like the one we just saw in the skit, I hope you find strength in your ability to respond, whether it be through peaceful protesting, engaging in debate, writing for your student newspaper, or any of the many other ways you can amplify your voice on campus. If you have any questions about the university’s policies on speech and protest, I refer you to the [name] section of the student handbook and the [name] page of our website. You can also ask your RA or any student affairs personnel.

[1] Private school edit: While we are a private school and not constitutionally bound by the First Amendment, our institution values freedom of speech and has made this clear throughout our institutional policies and commitments. Because of this, we have a contractual obligation to uphold your right to free speech, and we cannot discriminate against certain viewpoints or content.

[2] Private school edit: Because we have an obligation due to our institutional promises to give room to a wide range of ideas, university leaders must apply our policies in a viewpoint-neutral way.