Lesson: Student Protest Then and Now 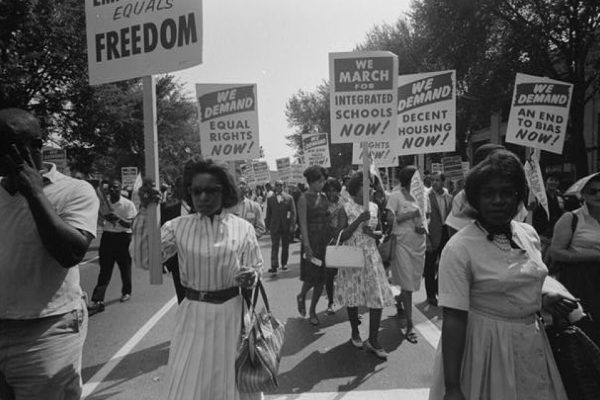 Use: Beyond use during digital or in-person orientations, this lesson can be used in first-year experience seminars so students have the opportunity to participate in discussions about the history presented and its relationship to current events on campus. This lesson can be particularly useful for teaching international students about the history of free speech on American campuses.

On October 13, 2014, hundreds of protesters, both students and non-students, gathered around a clock tower on Saint Louis University’s campus in Missouri to protest the police shooting of VonDerrit Myers Jr., the 18-year-old son of a university employee.[1] VonDerrit’s death occurred just months after the police killing of Michael Brown, an unarmed teenager, in nearby Ferguson, Missouri, and it reignited frustrations with police officers’ treatment of racial minorities. The protest transformed into a week-long sit-in where students and outside community members held discussions about race, equality, and poverty. The demonstration culminated in an agreement between the students and the university’s administration to commit to various initiatives, such as recruiting more students and faculty of color to the campus and increasing funding for African-American studies programs.

In recent years, we have seen students organize around racial justice, sexual assault, climate change, the Second Amendment, and student loan debt, among other issues. Today’s activism builds on the work of past generations of students who used their First Amendment freedoms to hold power accountable. Some of the most influential examples of student protest took place in the 20th century. During this period, students stood up to political orthodoxy, challenged unjust laws, and spoke out against restrictive speech codes. In doing so, they often had to fight for the basic right to protest in the face of restrictions on speech imposed by their universities or the government.[2]

While student protests have occasionally crossed into unprotected conduct and speech, you as students should understand that, within the bounds of the First Amendment, you have a great deal of freedom to engage in protest and demonstrations. By doing so, you can raise awareness of problems and bring about change.

Take, for example, the period after World War II when a senator named Joseph McCarthy led a national campaign to rid the United States of communism. Taking advantage of the public’s fears of Soviet influence, McCarthy used the federal government to investigate private and public institutions across the country for signs of communist propaganda. Many state and local governments followed suit, firing public employees who were suspected to be affiliated with the communist party and encouraging others in their community to do the same.

Though McCarthy’s actions threatened a variety of institutions, they posed a specific kind of existential threat for universities, which had traditionally enjoyed intellectual and academic autonomy from the government. And so, when the Indiana Textbook Commission announced in 1953 that it was banning the story Robin Hood from all public K-12 schools due to themes they thought supported communism, a group of college students decided they had to act decisively. Using a sack of chicken feathers from a local farm and green dye, the students pinned the feathers to their shirts, in symbolic protest of the book ban.[3] News of the “Green Feather Movement” spread across local and college newspapers throughout the country and spurred similar demonstrations at Harvard University, the University of Michigan, the University of Wisconsin, the University of Illinois, the University of Chicago, Purdue University, and the University of California, Los Angeles. It even inspired an opposing “Red Feather Movement” at Harvard and the University of Indiana made up of pro-McCarthy students, though their efforts were short-lived.[4]

Private colleges were also susceptible to government scrutiny during the McCarthy Era. At Sarah Lawrence College, a private liberal arts school in New York, a total of 18 faculty members were targeted by the government. Students published statements in The New York Times in support of their professors, while the student newspaper tracked and published information regarding the attacks on their academic freedom.[5]

In an era defined by collective silence and ideological conformity, these students chose to openly criticize government censorship. To break through the hush, the students during the McCarthy Era had to believe in the value of their ideas. In other words, they had to fear the consequences of silence more than the consequences of speaking out. Few other students in American history understood this more than a group of black students in 1960 Greensboro, North Carolina, whose protest ignited the Civil Rights movement.[6]

When four black students from North Carolina A&T University sat down at a “whites only” lunch counter in a department store in Greensboro, North Carolina to protest racial segregation, the waitress didn’t know what to do. She knew that they knew that they weren’t supposed to be there. Why had they sat there? What were they thinking? In fact, Ezell, David, Franklin, and Joseph had been planning the demonstration against the city’s segregation laws for weeks.

All across the South, laws separated where black and white people could eat, shop, live, and work. It was not uncommon for protesting black Americans to be arrested for resisting the status quo. In their training, the students had practiced being shoved and thrown to the ground. The plan was to remain calm, to not respond to physical aggression. This strategy assured that the content of their message was not tainted by violence.[7]

Though we might now remember many of these protests in a less controversial light, it is easy to forget how intensely radical the ideas of Civil Rights protesters were at the time they demonstrated. Many states sent black Americans to jail for protesting segregation using outdated statutes restricting where and when people could assemble. Rev. Martin Luther King, Jr. himself was arrested in Albany, Georgia for praying outside a government building to end racial segregation.[8] Even though police did not always respect his First Amendment rights, King recognized the value free speech offered Civil Rights protesters who challenged the status quo.

Around the same time as the Civil Rights movement, students also began protesting the United States’ war with Vietnam. Using similar non-violent strategies, college students around the country held teach-ins, passed out fliers, and organized massive rallies both on- and off-campus. However, not all college administrations were welcoming of this kind of political activity, and they looked for ways to limit student expression. At the University of California, Berkeley, the president of the university announced a policy prohibiting advocacy of political causes or candidates as well as outside political speakers. In response, a group of students started a campaign against the administration’s speech codes in what became known as the Free Speech Movement.

The Free Speech Movement at Berkeley was a widely successful student campaign dedicated to ensuring students’ right to discuss ideas freely on and off campus without fear of administrative censorship. As Arthur Goldberg, one of the protest leaders, put it, “the most important thing is to make this campus a marketplace for ideas.”

For Goldberg and other activists, the university’s policies restricting student political activity denied students the opportunity to deliberate new and creative political solutions to public issues, a role he and others eagerly desired.[9] Though the movement involved more than free speech, the student’s emphasis on the First Amendment and participatory democracy had a lasting impact on higher education.

Over the course of American history, students and faculty at colleges and universities have fought to protect their right to think and speak freely. They have played an important role in upholding First Amendment freedoms of speech, press, assembly, and petition. These individuals understood intimately that a healthy democracy rested on the ability and willingness of its citizens to hold power accountable. As you begin your first year of college, we want you to see yourself as part of this long tradition of student protest.

Instructions for a Student-Led Discussion

Consider using this module as a lead-in to a seminar-like discussion on the tradition of student protest. Have your student orientation leaders talk to small groups of students about their experiences with protest and their thoughts about the history of student demonstrations. Think about inviting student leaders from political and ideological student groups or your student senate to participate in the discussions.

The following questions may help to guide your discussion: