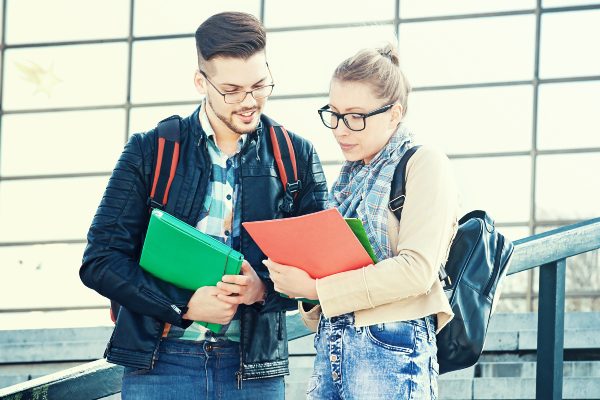 Use: Beyond use during digital or in-person orientations, the video adaptation can be placed on university web pages explaining student rights or diversity and inclusion pages to give a fuller picture of how to embrace difficult conversations.

The [university name] aims to bring together people of different backgrounds, faiths, and opinions because we see diversity as a key component of the mission of education. Without racial, socio-economic, religious, and ideological diversity, our campus has the potential to turn into an echo chamber where only the same voices, ideas, and arguments are heard.

For the record, we are not saying that college can’t be a time to make friends with like-minded people. Freedom to associate with a group of your choice is essential to the democratic way of life. Without the right to join or leave groups voluntarily, and to work with others towards a shared goal, important ideas would often stop at the individual. Moreover, cultivating relationships with people who share similar experiences and opinions is human, and it is natural to want to surround ourselves with people who “just get us,” especially when we are going through a period of intense change.

But it’s also important to look beyond these circles and develop the capacity to talk across differences. Think about all the spaces in our lives where we can’t control who comes in and comes out. While you can certainly decide who hangs out in your dorm room, certain shared spaces, like lounges and courtyards, are designed to encourage us to step out of our comfort zone.

Those conversations are undoubtedly challenging, but they are also uniquely beneficial. Learning how to talk across differences will not only help you personally—shaping you into a more agile thinker—it will also help to strengthen the inclusive atmosphere and culture of open dialogue on campus, which relies on our ability to learn from each other.

Put very simply, we limit ourselves when we only engage with similar worldviews. When surrounded by identical viewpoints, we tend to assume that everyone else holds the same information and perspective. In this setting, we become less curious, more hostile to perceived differences, and less reflective about our own internal biases. Overall, this is not an ideal atmosphere for students of higher learning.

To combat this problem, we can make a habit of talking in good faith with people who don’t share our worldview. Asking each other how we arrived at our beliefs, and about where we have doubts, can be a perfectly respectful exercise in challenging our assumptions about one another and the world around us. When having these discussions, we can be mindful of our own assumptions and pose questions that help us to see if those beliefs actually match reality.

This open-mindedness becomes especially important in the context of classrooms, where we rely on our classmates and professors to reach a fuller understanding of a particular topic. In contrast to high school, many college classrooms are not so much about getting the answer right as they are about testing out new ideas.

There may also be occasions outside of the classroom where collaboration becomes extremely useful, if not necessary. Consider, for example, a case at the University of Rhode Island when the university’s student senate refused to fund certain student groups because they believed—incorrectly—that funding “political” or “religious” groups would endanger the student senate’s tax-exempt status. Beyond that incorrect belief, the policy had been applied selectively, on the student senators’ subjective interpretations of a group’s mission. Groups like the nonpartisan BridgeUSA were denied funding after being labeled political, while other groups engaged in political advocacy were given money. Five separate student groups who had been denied funding, including the campus chapters of the College Republicans and College Democrats, worked together to challenge the student council’s discriminatory funding methods. And they succeeded! Their reasoning convinced the student council to amend its policies.

The group’s ultimate success stemmed not just from the cogency of their arguments, but the power inherent to diverse coalitions. The group’s shared concern that the policy was unconstitutional overshadowed other, arguably more ingrained, ideological differences. The symbolic power attached to their alliance lent credence to their argument and made it more difficult for the student council to simply ignore their case. If anything, we hope this story encourages you to think about what we lose when we choose to let cultural, intellectual, or interpersonal differences prevent mutually beneficial collaboration.

Look, if a conversation outside of the classroom inspires high emotion, if it erupts into insults or personal attacks, you should know that it’s okay to walk away. But when we resort to silencing and intimidating our fellow students and calling for censorship, we errode the trust and respect necessary for our community.

But not all conversations have to turn out this way.

Sure, the two may have shared a love of opera, they may have both been raised in outer-borough New York City, and they may have both served together on the United States Court of Appeals for the D.C. Circuit before working together again on the Supreme Court. But the extent to which they disagreed on matters of law and justice cannot be exaggerated.

Scalia was the only judge to write a dissent in U.S. v. Virginia, a landmark case for gender equality, and famously opposed Obergefell v. Hodges, the decision that guaranteed the right for same-sex couples to marry. Whereas Scalia tended to insist on an “originalist” reading of the Constitution, Ginsburg believed the document was “living” and its meaning needed to be adapted to the times. This central difference between the two manifests clearly in their voting record: in nonunanimous cases, the two were on opposing sides 52% of the time.

These differences were eclipsed by their shared sense of humor and unshakeable respect for each other. While working together as judges, they were known to ask the other for feedback on their writing. In other words, they turned their disagreements into opportunities for learning. They did not change each other’s world views, but instead developed and honed their own.

We’ll leave you with the following video about Ginsburg and Scalia’s friendship. While watching, notice how their intellectual and political disagreements did not translate into personal bitterness. How did they accomplish this and how can we learn from their working relationship?