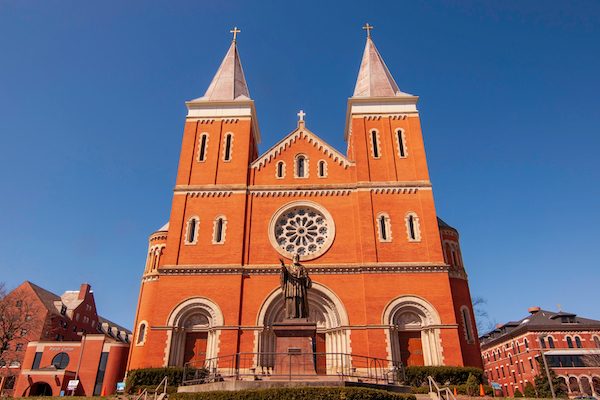 In what could be the most extreme example of guest speaker censorship that FIRE has seen in its more-than-20-year history, the president of Saint Vincent College in Pennsylvania said this week he and his cabinet will now exercise prior review over all college-sponsored campus speakers, to ensure “no message that contravenes the [college’s] core values . . . will be allowed.”

The move, which comes amid a speaker controversy at the college, is a brazen violation of Saint Vincent’s binding commitments to free expression and academic freedom for students and faculty. The new policy could also jeopardize its accreditation.

FIRE wrote the college today objecting to its response to a speech by David Azerrad earlier this month at Saint Vincent’s two-day conference, “Politics, Policy and Panic: Governing in Times of Crisis.” The conference, which featured nine speakers, was sponsored by Saint Vincent’s Center for Political and Economic Thought, whose mission is to bring a variety of sometimes controversial views to campus. CPET succeeded on the controversy prong with its selection of Azerrad, a Hillsdale College professor who said in his talk, “Black Privilege and Racial Hysteria in Contemporary America,” that BIPOC Americans top the nation’s “semi-official racial hierarchy,” and suggested Vice President Kamala Harris’s race unduly factored in her selection as President Biden’s running-mate.

The speech drew swift backlash from some members of the Saint Vincent community.

On Tuesday, the college’s president, Father Paul Taylor, announced he and his cabinet would now vet all future campus speakers “to make sure we invite a diversity of responsible opinion on a variety of topics important to our students’ educational process” and to ensure “that the message to be delivered is not in conflict with the spirit and Mission of the College.”

Taylor also announced an effective takeover of CPET, in the form of “immediate structural changes” to its supervision alongside “a review and assessment of policies and procedures.”

When private schools voluntarily commit to upholding expressive freedoms – as Saint Vincent does – they are legally and morally obligated to keep those promises.

As evidenced by his comments to the media, Taylor appears to think Saint Vincent’s status as a private college gives him carte blanche to do whatever he pleases, up to and including unilaterally eviscerating student and faculty rights to invite campus speakers. As we note in our letter, that’s flatly incorrect: Private institutions may indeed prioritize any number of values over free expression. Religious schools like BYU and Yeshiva University, and military colleges like the United States Military Academy do so — and they’re clear about it in their policy documents. (FIRE calls them “Warning” schools, as students and faculty can know before they go that they’ll have fewer expressive rights.)

But when private schools voluntarily commit to upholding expressive freedoms – as Saint Vincent does – they are legally and morally obligated to keep those promises.

Don’t take our word for it. Ask Saint Vincent’s accreditor, the Middle States Commission on Higher Education, which is explicit that each accredited institution must possess and demonstrate “a commitment to academic freedom, intellectual freedom, [and] freedom of expression.” Federal courts have also held for decades that when colleges promise free expression, “the right of the faculty and students to hear a speaker . . . cannot be left to the discretion of the university president on a pick and choose basis.”

Taylor appears to think Saint Vincent’s status as a private college gives him carte blanche to do whatever he pleases.

We acknowledge in our letter “the current controversy places pressure on [the college] to meet unpopular speech with censorship,” but we explain that ongoing dialogue is the preferred remedy to censorship at a college that promises free expression. Other colleges have done so successfully when faced with similar calls to censor protected speech. We also note that diluting the strength of the right to expressive freedom “in the name of penalizing instances of unpopular speech will imperil the rights of others.”

FIRE has given Saint Vincent one week to respond to our request that it immediately retract this policy and cease undue interference with its faculty center.