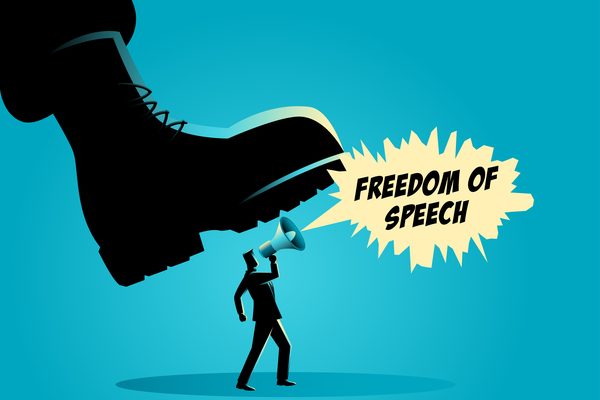 Many institutions of higher education promote their campuses as spaces where open discussion, debate, and disagreement are not only tolerated, but encouraged, based on the idea that free expression is integral to the development of new knowledge. While colleges often fall short of embodying this promise, some fall very short, disciplining or discouraging even the most innocuous speech.

Take, for example, the case of Maryland Institute College of Art faculty member Saul Myers. In June 2021, Myers was formally disciplined by the college despite violating no official policy. His offense? Offending a colleague, who characterized Myers’ remarks proclaiming the importance of free expression as harassment.

Then-Provost David Bogen justified the decision to discipline Myers by appealing to the value of “respect,” stating in a warning letter, “MICA has a right to require respectful interactions among members of its community.”

The fact that Myers’ speech about the value of free expression set off the chain of events that resulted in his censure shows just how little it takes to provoke disciplinary action when subjective comfort trumps all other considerations. MICA’s response reveals how easily “respect” can be weaponized to target virtually any expression.

A @mica professor defended free expression at a faculty meeting—and a colleague felt “unsafe.” Then came HR, a discrimination charge, and a warning against being insufficiently “respectful.”https://t.co/vQHqSiXvIX

Bad arguments beget bad policies, which beget bad arguments, and so forth. Six degrees of separation, the idea that every person is connected to every other person through six or fewer social links, is often invoked in jest by those who’d like to claim closeness to famous historical figures or celebrities. However, the theory becomes less humorous when it’s used not to connect your Aunt Linda to Kevin Bacon, but to connect innocuous speech to “dangerous” speech, and confer guilt by association. Those who hold the absence of offense as their primary virtue may find it difficult to resist using six-degrees-of-separation-style rationalizations to label even the most benign speech potentially dangerous. After all, even relatively tame speech might lead to more speech, which might lead to more speech, and more speech . . . that somebody finds distasteful.

By this logic, speech supportive of free expression is most troubling of all. It opens the floodgates to a whole slew of unsavory thoughts and unorthodox attitudes, sure to provoke a list of uncomfortable side-effects long enough to put a prescription drug warning-label to shame.

But no one would really impose policy built on this paranoid style of reasoning, right? Unfortunately, what sounds like a rationale limited to a poorly-written movie villain is the very argument used by the Emory Law Student Bar Association to deny recognition to Emory Free Speech Forum, a student organization dedicated to — drumroll, please — freedom of speech.

The Student Bar Association’s refusal to grant recognition to Emory Free Speech Forum represents a triumph of safetyism over sense-making.

Though the Emory Free Speech Forum satisfied all criteria for recognition, the Emory SBA rejected the group’s application, claiming that (hypothetical) discussions “will likely give rise to a precarious environment . . . where the conversation might very easily devolve.”

Like MICA Provost Bogen, who appealed to “respect” to justify disciplining speech, the SBA appealed to “safety,” claiming, “There are no apparent safeguards in place to prevent potential and real harm that could result from these discussions.”

Also like Bogen, the SBA failed to recognize the subjective nature of the “harm” it sought to avoid, ignoring the inescapable fact that its decision simply shifted the harm onto the group it favored less. It went even further, though, pushing a bad argument past the point of parody by targeting potential speech for the possibility that it might cause offense, hypothetically.

Those who hold the absence of offense as their primary virtue may find it difficult to resist using six-degrees-of-separation-style rationalizations to label even the most benign speech potentially dangerous.

The Student Bar Association’s refusal to grant recognition to Emory Free Speech Forum represents a triumph of safetyism over sense-making that is incredibly troubling, yet increasingly unsurprising in an education landscape where administrators set self-serving standards that teach students all the wrong lessons about conflict-resolution. When universities reject the affirmative commitments upon which they have built their reputations and instead adopt avoidance of controversy as their north star, it’s no wonder students think censorship is not only acceptable, but virtuous.

As students graduate, enter the workforce, and influence public policy, their attitudes toward free expression will surely have myriad impacts on society and culture. Those in positions of authority in academia should consider whether they would rather live in a world where self-expression is understood as a vital instrument, integral to approaching mutual understanding; or as an ever-looming threat, to be quashed at any cost by the powers that be.

Meanwhile, students should consider whether a comfort that can only be maintained through constant vigilance, that requires viewing one’s peers as potential transgressors, is, in the long run, really so comfortable for anyone at all.