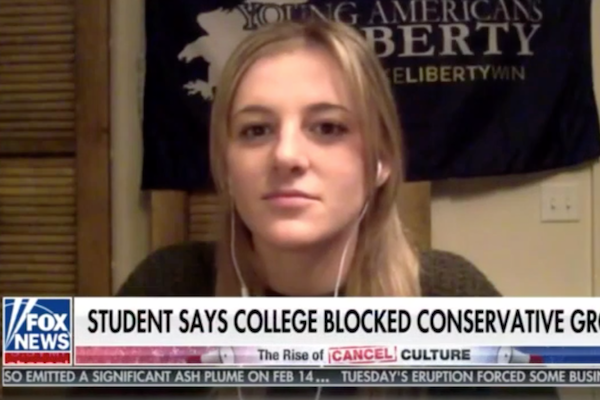 Pressure is once again mounting on Skidmore College to approve a student club that was denied recognition by its Student Government Association over concerns the group would promote “hate speech” on campus — making it one of two student organizations this year initially denied recognition due to their political views. In a letter to Skidmore’s president, the Alliance Defending Freedom threatened legal action against the private liberal arts college if it did not reverse the denial of recognition of a chapter of the Young Americans for Liberty by May 21.

Skidmore’s chapter of YAL, a libertarian student organization, was denied approval for a “trial period” to become a registered student group back in early March. During an appeals meeting with student government officials on March 23, YAL organizer Hannah Davis alleged that student leaders were “openly hostile” and “repeatedly characterized her and YAL as hateful and bigoted,” according to ADF’s letter.

“I started emailing students and almost immediately, I got pushback,” Davis said in an interview on Fox News.

In an online petition started by members of the Skidmore student body, which has since garnered more than 1,800 signatures, YAL was accused of a “pattern of racism, homophobia, and transphobia,” and Skidmore was urged to “make no space for this kind of open bigotry on campus.” The petition included several alleged examples of such behavior, including a 2018 YAL event with right-wing provocateur Milo Yiannopoulos hosted by an Oregon chapter almost 3,000 miles away.

FIRE is once again calling on Skidmore to adhere to its own commitments to recognize and protect its students’ freedom of expression.

Skidmore’s student government recognizes nearly 130 student groups, ranging from political organizations to dance clubs to religious groups, but it refused to recognize YAL based solely on viewpoint. Although Skidmore students have argued that individuals associated with YAL on other campuses have said racist, hurtful, or offensive things, the controversial words and actions of outside speakers — or even students who might say similarly controversial things — should have no bearing on the student group’s recognition at Skidmore.

If Skidmore promises free speech, that means providing it even to those whose speech is controversial.

And as mentioned above, this is the second time this year that Skidmore’s student government has denied recognition to student group applicants over differences in political viewpoint. In March, FIRE sent a letter to Skidmore expressing concern over the student government’s decision to reject an application by Progressive Zionists for Peace to form a chapter at the college. PZP student organizers were informed the club had been denied recognition because “some members [of the committee] expressed concern that a dialogue focused club with one perspective being conveyed could be troublesome.” (Two days after FIRE’s letter, Skidmore reversed course and certified PZP as an official student group.)

In our letter, we explained that the decision not to recognize the progressive Zionist club violates the college’s strong promises of freedom of expression and freedom of association https://t.co/CwC3wqF5yR

It was a similar refrain that to that lodged by Fordham University in denying recognition to a chapter of Students for Justice in Palestine, where administrators first fretted that allowing advocacy of “political goals of a specific group” would lead to “polarization” and then claimed that SJP chapters at other institutions had engaged in misconduct. Fordham, to its discredit, fought to censor the SJP chapter for nearly half a decade, ultimately prevailing (wrongly, FIRE thinks) in New York’s appellate courts. A trial court had first ruled in that case that “consideration of whether a group’s message may be polarizing is contrary to the notion that universities should be centers of discussion of contested issues,” as Fordham purports its mission to encompass “freedom of inquiry.”

The case was brought under a provision of New York law that grants considerable deference to the decisions of private universities and colleges while purporting to hold them accountable to promises made to students, including freedom of expression and association. However, taking deference to a whole new level, the appellate court blessed Fordham’s conflicting explanations and policies, undermining the procedure’s purpose to ensure “essential fairness in the somewhat one-sided relationship between the institution and the individual.”

According to ADF’s letter, the lawsuit that potentially faces Skidmore would take a different tack, invoking not the overly-deferential procedural claims brought against Fordham, but instead arguing that Skidmore breached its contract and engaged in “deceptive trade practices,” arguing that the college “has falsely promised that it will protect students’ ability to speak and associate freely” and misled students “by misrepresenting the nature of who can form student groups and what views are allowed on campus.” It’s hard to argue that this isn’t exactly what happened.

Skidmore is a private institution, so the First Amendment does not require the college to grant its students any form of freedom of expression. But because it makes strong promises to do so, it has a legal obligation — arising from contract and other law, not the Constitution — to keep those promises. Giving the student government the ability to decide what groups can be recognized, then standing idly by when it abuses that authority to refuse recognition based on viewpoint, is flatly incompatible with any commitment to the freedom of expression it promises.