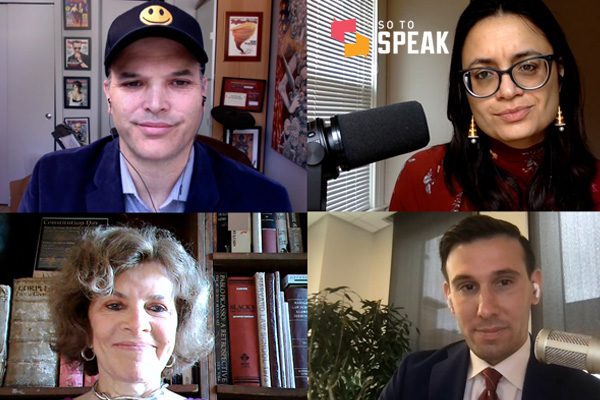 Twitter is going to become 8chan. At least, that’s what a recent episode of the popular radio program “On the Media” suggests will happen if Elon Musk successfully buys Twitter.

Musk promised to bring greater free speech protections to the social media platform. But where Musk sees an opportunity for more freedom, some see the potential for too much freedom.

On today’s episode of So to Speak: The Free Speech Podcast, Matt Taibbi, Nadine Strossen, and Amna Khalid discuss what “On the Media” got wrong and what they got really wrong in their episode “Ghost in the Machine.” (No, “On the Media,” Twitter will not become a platform for child pornography.)

This is the second time we have addressed bad free speech arguments from “On the Media.” The first time was last September, when this same group responded to the episode, “Constitutionally Speaking.” Read a transcript of this episode.

Nadine Strossen is a professor of law, emerita at New York Law School and served for 17 years as the president of the ACLU.

Amna Khalid is an associate professor of history at Carleton College and the host of a new podcast called “Banished.”

Subscribe and listen to “So to Speak: The Free Speech Podcast” on Apple Podcasts, Google Podcasts, and Stitcher, or download episodes directly from SoundCloud.