FIRE > Newsdesk > Top Story > Speak your mind, but not like that: Are we all hypocrites when it comes to cancel culture? 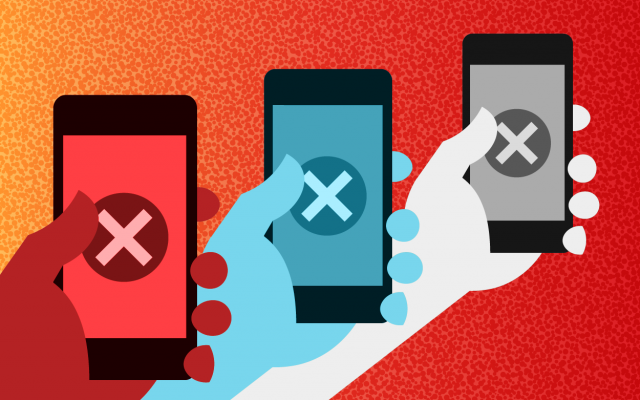 The results of FIRE’s national “free speech and cancel culture” survey are in, and, in a win for the First Amendment, they reveal strong support for free speech, and widespread concern about cancel culture.

Eighty-three percent of respondents either “somewhat” or “strongly” agreed that democracy can only thrive if there is free speech, and 63% even identified with the statement, “Laws protecting free speech aren’t enough: the American people need to celebrate and nurture free speech for it to be fully protected.”

“American society is better off when people feel free to express their true opinions,” 60% of respondents agreed. “No matter how controversial.”

* 58% of Americans feel our democracy is threatened because people are afraid to voice their opinions.

* 73% have heard of “cancel culture,” of which 60% think there is “a growing cancel culture that is a threat to our freedom.”https://t.co/2Clz24aZkj

When it comes to cancel culture, 59% of respondents familiar with the term agreed that it poses “a threat to freedom,” and that canceling controversial artists (musicians, painters, actors, comedians, social media influencers, etc.) has a negative impact on culture. Fifty-one percent agreed that silencing opinions, even those considered extreme, threatens progress.

This is all good news, to be sure, but further survey results reveal a surprising discrepancy: Some respondents who readily recognize the importance of free speech in theory simultaneously support behaviors that threaten it in practice.

Specifically, on occasions when speech is “considered hateful,” more than half of respondents would like social media companies to ban or restrict users and 47% would like public institutions (like colleges and universities) to prevent people from speaking. Thirty-eight percent even believe that people who utter speech that is “widely considered hateful” should lose their jobs.

So much for expressing one’s true opinions, “no matter how extreme.”

Hate is a strong word, but its meaning is imprecise. Given the fact that “hateful” words and even “hate speech,” specifically, are subjective designations that have been used to refer to many different kinds of speech throughout history, the full significance of these findings is unclear. However, the research of social psychologist Jonathan Haidt may help resolve the apparent contradiction between simultaneous concern about and support for cancel culture.

The kids are all righteous

People contain multitudes, and may affirm abstract principles, only to abandon them when their particular sense of moral judgment is triggered. “Human nature is not just intrinsically moral, it’s also intrinsically moralistic, critical, and judgemental,” Haidt writes in “The Righteous Mind.” He claims that ideas of morality are not universal: Instead, most of us align with one of a few sets of common moral frameworks, which he calls “matrices.”

According to Haidt, not only is it inherently human to moralize from within the framework of one’s subjective preconceptions, but also to make moral judgments instantly, with little to no conscious thought. He frames the dichotomy between conscious controlled thinking and emotion-driven impulses as a relationship between a rider and an elephant. In this relationship, the elephant instantaneously reacts to stimuli, while the rider primarily finds ways to rationalize the elephant’s emotional response.

When we let others speak freely, recognizing that our beliefs might benefit from contact with other perspectives, we preserve the potential to change our own minds.

In the real world, this phenomenon might look something like this: You (the elephant) feel a pang of outrage upon reading an inflammatory tweet; then, you (the rider) construct a response that reflects and rationalizes your outrage.

Within this framework, it’s not difficult to understand how a well-intentioned person might genuinely believe that freedom of speech is important, or that cancel culture is a problem, yet unironically join a Twitter mob bent on deplatforming someone who has “truly crossed the line.” It’s equally easy to see how a person, reasoning from a particular moral foundation, might form elaborate arguments to justify the cancellation of someone who “really deserves it.”

“Morality binds and blinds,” writes Haidt. “It binds us into ideological teams that fight each other as though the fate of the world depended on our side winning each battle. It blinds us to the fact that each team is composed of good people who have something important to say.” In other words, everyone believes their own judgments are righteous and correct, and many feel justified in imposing these “righteous” judgments on others.

Two recent instances of discriminatory treatment toward those with very different viewpoints — both of whose rights were defended by FIRE — about former Vice President Mike Pence illustrate this point.

Less than a month later, in an unrelated incident at Stanford, the student government denied the Stanford College Republicans’ request to fund an event that would have brought Pence to their campus, citing ideological objections to his presence.

One student senator, who abstained from the vote on moral grounds, said, “I think it’s totally valid to abstain in this vote just because we all do have our individual morals and values.”

“I don’t want that blood on my hands,” said another student senator, conflating support for the event’s funding with a personal endorsement of Pence.

In a polarized culture in which many confuse allowing speech with endorsing it, virtually any person faces a real danger of cancellation if their perspective happens to offend the wrong person’s moral sensibilities. So how — recognizing the problem posed by cancel culture, and our own individual proclivities toward censorial behavior — do we stop the snowball of censorship from becoming an avalanche and crushing us all?

Perhaps we can consider the importance of prioritizing “liberty.” This value itself reflects a particular moral matrix concerned with protecting the freedom of expression of all others. Believing in liberty does not demand that human nature fundamentally change, or that people with certain perspectives silence themselves. It does not require abandoning our individual opinions, unique senses of moral judgment, or even righteous anger toward those with whom we disagree. It does require that we attempt to channel our energy away from calls for censorship, else we erode for ourselves the very rights we wish to wrest from others.

Despite the human tendency toward instant judgment, it is possible to change people’s minds, says Haidt, but “you’ve got to talk to their elephant.”

Empathy is an antidote to righteousness. If you really want to change someone’s mind on a moral or political matter, you’ll need to see things from that person’s angle as well as your own. And if you do truly see it the other person’s way — deeply and intuitively — you might even find your own mind opening in response.

Recognizing that minds can be changed with time and through empathy should be a comfort to those who recognize that cancel culture is a problem, yet strongly oppose particular points of view, because it opens the door to a sort of “cancellation” that doesn’t require coercion or silencing: genuinely convincing someone they’re wrong.

Believing in liberty for all is contingent on humility.

Perhaps more importantly, when we let others speak freely, recognizing that our beliefs might benefit from contact with other perspectives, we preserve the potential to change our own minds and enrich our own unique understanding of truth. To deny the possibility that opinions other than our own may contain some truth “is to assume our own infallibility,” writes John Stuart Mill in “On Liberty.”

Believing in liberty for all is contingent on humility. Partisans who conflate a defense of liberty with a defense of a particular person or perspective may see a principle that protects the rights of team blue and team red (and all teams in between) as self-contradictory, or even harmful, but neglect to see the harm that results from forcibly repressing viewpoints. If we value those features that enable pluralistic societies to function — innovation, truth-seeking, tolerance — next time we read an awful tweet, we might rage privately, yet emerge publicly with a measured argument. Also acceptably, though less helpfully, we might pen an angry diatribe. However we respond, we’d be wise not to call for censorship, lest we endanger our right to respond at all.