This is the third installment in a series of posts delving into the results of FIRE’s “Speaking Freely” report on college students’ attitudes toward expression on American campuses. In the “Reactions to Expression” section of our report, we asked students how they would respond to ‘“racist” and “offensive” speech by their peers — but we let them define those terms for themselves. This was a deliberate methodological decision, and in this post, we will delve into the reasoning behind it.

To do this, we asked students a series of questions.

We provide an in-depth discussion of the responses to this series of questions in our report. Here, though, we will discuss why we chose to allow students to bring their own subjective definitions of the terms “offensive,” “hurtful,” and “racist” to the survey. 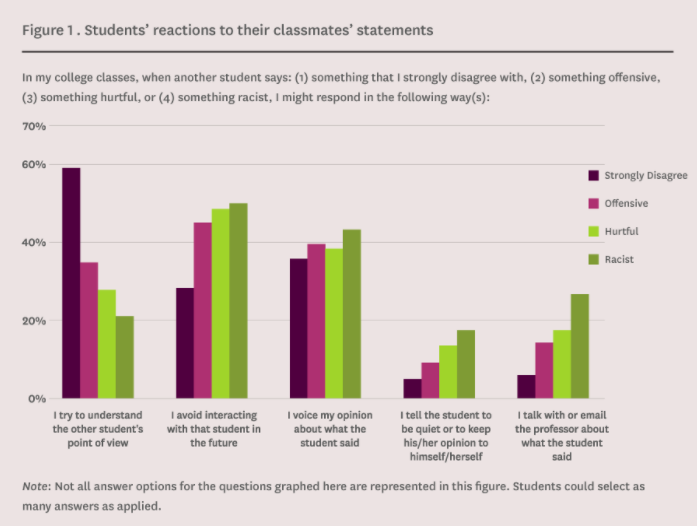 When students sat down to respond to our survey, there were likely many things on their minds: tomorrow’s quiz, getting laundry washed, finding another cup of coffee, the latest episode of their favorite television show. A student might also have more pressing concerns on his or her mind, such as going through a breakup or dealing with family problems back home. Our goal was to write a survey that, in the clearest and simplest way possible, asked students how they would react to the expression of their classmates.

After considering various ways to write the survey, we followed in the steps of other survey designers and allowed students to bring their own meaning to the terms in this series of questions. By asking these questions in the simplest way possible, we hoped to cut through the noise of those other concerns in the respondents’ minds. This allowed the respondents to devote as much cognitive energy to the survey as possible. If we had used another method, we could have defined “hurtful,” “offensive,” and “racist” for the students — or given them hypothetical examples of these types of statements — before asking students how they would respond to them. But these alternative methods would require extra thought on the part of the respondent, which likely would have reduced their ability to quickly give us the most authentic, accurate response possible. Allowing students to define these terms for themselves also gives us important insight into how students might respond to a statement they perceive as “offensive,” “hurtful,” or “racist,” whatever was actually said.

It does mean, however, that we cannot comment specifically on how a student might react to a particular statement from a classmate, as our survey did not provide objective definitions of “offensive,” “hurtful,” and “racist” for the respondents. To show you what we mean, Figure 1 shows that 45 percent of students might avoid interacting with a peer who makes an offensive statement, or that 45 percent of students might avoid interaction with a classmate after the classmate makes a statement that the student finds offensive. This subjectively offensive statement could be offensive to one student, but not to another. One respondent might find the statement “Avocados are disgusting.” to be offensive, but another student might strongly agree with the same statement. Further research should delve into what types of statements students find to be “offensive,” “hurtful,” or “racist.” This type of work, paired with our results, would allow for a more nuanced understanding of expression on college campuses.

In 1961, V.O. Key, a pioneer in the field of political behavior, wrote, “to speak with precision of public opinion is a task not unlike coming to grips with the Holy Ghost.”

In the 50 years since he wrote these words, much work has been completed to make sense of question wording and formation in polling instruments and surveys. But Key’s words still resonate with those who write and analyze surveys. Polling is an art that requires the survey author to balance a desire for specificity with the need to design a questionnaire that respondents can quickly understand and will actually — and accurately — answer.

Check back to FIRE’s Newsdesk later this week for our next post in this series, which will look at how the attitudes of community college students and four-year undergraduate students differ in regard to expression on campus.