If you missed the rest of our review of the top 25, you can check them out here and here.

As a reminder, we used information from our Spotlight speech code database as well as information on other headline-making free speech news we think students should know about before they apply. FIRE rates schools’ speech codes—policies that restrict campus speech, or could easily be used to do so—using a traffic light-inspired system. A “red light” institution has at least one policy that both clearly and substantially restricts freedom of speech. A “yellow light” institution is one whose policies restrict a more limited amount of protected expression or, by virtue of their vague wording, could too easily be used to restrict protected expression. FIRE’s highest, “green light” rating is awarded to institutions with policies that do not seriously imperil speech.

Johns Hopkins earns FIRE’s red light rating due to two policies that punish protected speech: the university’s technology usage policy, which prohibits sending “offensive” messages, and the “Principles for Ensuring Equity, Civility and Respect for All,” which prohibit any “rude, disrespectful behavior.” The latter policy was enacted ten years ago this fall, in the wake of an incident in which the university harshly punished a student for posting an “offensive” Halloween party invitation on Facebook.

Tying with Duke University for the no. 8 spot, the University of Pennsylvania is one of the few top schools to boast a green light rating from FIRE.

Like Penn, Duke has a strong commitment to free expression and is among FIRE’s green light institutions.

MIT earns a yellow light for a number of policies that could be used to punish protected speech, including a harassment policy that targets “offensive remarks of a sexual nature.”

Stanford has numerous yellow light policies, including a policy asking students to report “acts of intolerance” to the administration. While the university claims that constitutionally protected but intolerant speech will not be subject to punishment, it cryptically states that such speech may be addressed through “education.”

Columbia’s President Lee C. Bollinger made promising pro-speech remarks earlier this year, and the school recently committed to protect speech in its “Affirmative Statement.” The university nevertheless earns a red light for two policies that unduly burden the very kinds of speech the Affirmative Statement claims to protect: first, a policy that defines discriminatory harassment to include (among other things) “negative stereotyping” and “denigrating jokes,” and second, an email usage policy that broadly bans “offensive or other unwelcome messages.”

Yale receives a yellow light for ambiguous policies prohibiting, among other things, conduct that “may imperil the integrity and values of the Yale community.”

From the Chicago Statement—the FIRE-endorsed principles that we have called the gold standard for free speech policy statements in higher education—to the school’s green light rating earned earlier this year after reforming its speech codes in conjunction with FIRE and a pro-speech letter from Dean of Students Jay Ellison over the summer, UChicago is a great example of a school committed to doing the hard work of protecting speech on campus.

Harvard has been under heightened scrutiny since it announced a new policy in May that FIRE and others have deemed a brazen attack on freedom of association. The policy, which administrators say would contribute to a more “inclusive community” and help address “deeply rooted gender attitudes” on campus, has raised serious concerns about civil liberties at one of America’s most famous campuses.

Unfortunately, this theme extends into other school policies, particularly the definition of actionable harassment in Harvard’s Handbook for Students, which deems punishable a wide swath of protected speech:

While Princeton professors have made promising strides toward protecting campus speech—last fall they became the first of 16 universities or faculty bodies to adopt the FIRE-endorsed Chicago Statement—administrators at the Ivy League institution have yet to similarly commit. 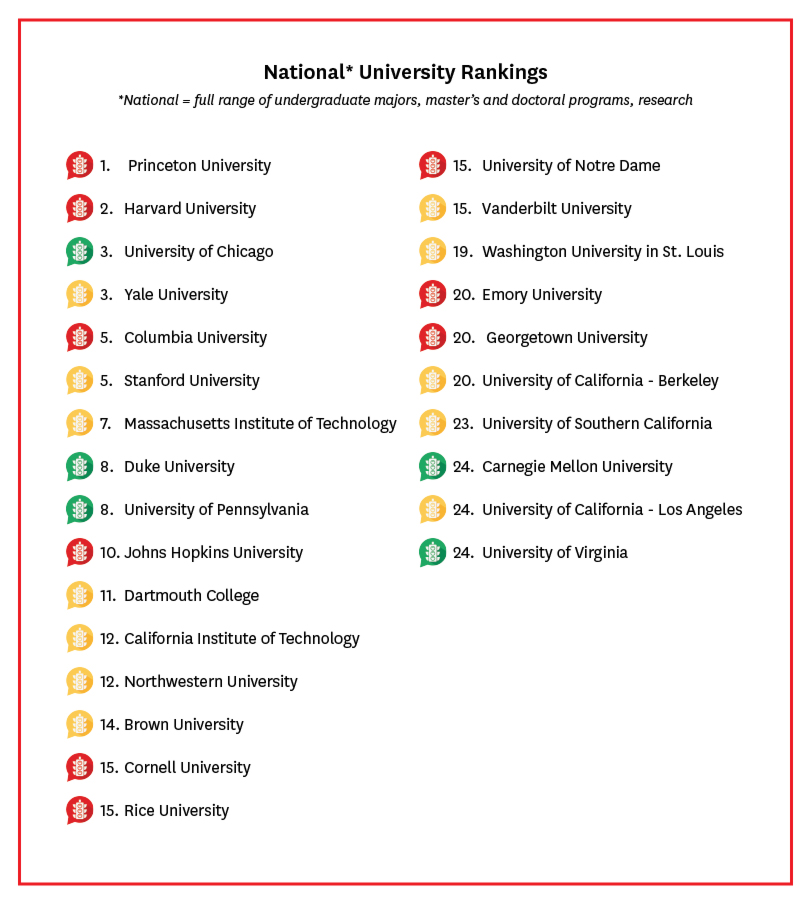 If you’ve got more questions about a college or university discussed here, or about another school on your application list, be sure to visit our Spotlight page to learn more about speech codes, see school-by-school rankings, and view our rating methodology. And to learn how best to remedy these policy defects, check out FIRE’s newly-revised Correcting Common Mistakes in Campus Speech Policies.