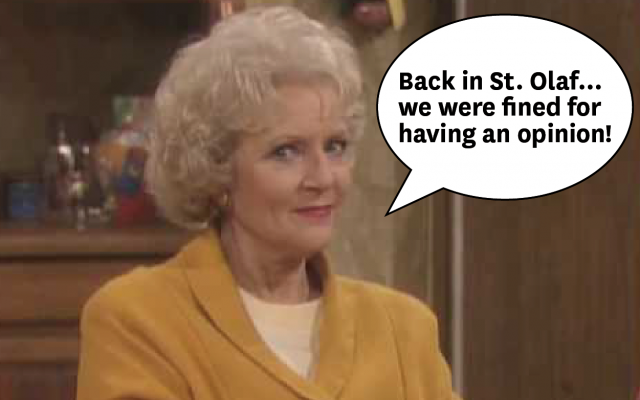 Fewer classes are being conducted remotely this fall, but much of campus discourse still occurs online — from online learning platforms to student group discussions on social media. In spite of this, far too many colleges are still living in the past, with archaic online speech regulations that infringe on free expression.

St. Olaf College, which bans using computing or networking resources to create or post “offensive” material, is one such offender. We’re not sure exactly when its “Misuse of Computers” policy was adopted, but since FIRE made it Speech Code of the Month way back in 2011, we know it’s at least ten years old. Because it’s such an egregious policy, we’re giving it another try and making it our Speech Code of the Month for November 2021.

A ban on “offensive” speech is about as broad as a policy can get. For example, sending a rude tweet about a sports rival, using a song with explicit lyrics for a TikTok post, or simply saying “Happy Thanksgiving” could all offend someone — but under First Amendment standards, expression can’t be limited on that basis alone.

Those examples may seem silly, but we’ve seen too many universities with similarly broad policies take action against protected, online speech. For example, in 2019, Wake Forest investigated an anonymous Instagram account over posting a parody of a student government campaign advertisement, which suggested “building a wall” between Wake Forest and Winston-Salem State University. The president of Wake Forest called the post “deeply offensive and unacceptable,” and thanked students who had reported it to the university’s bias reporting system, prompting an investigation.

St. Olaf is a private school, so it isn’t bound by the First Amendment. But it does commit to free expression in official policy, stating: “Free inquiry and free expression are essential attributes of the community of scholars” and, “[t]o this end, student organizations are free to examine and discuss all questions of interest to them, express their views, and hear opinions of others.”

If students have to worry the college could “suspend access” to their use of computing and networking resources or even hit them with “fines” if an administrator thinks something they’ve said was offensive, they certainly won’t feel they can “express their views” freely, as St. Olaf promises.

To live up to its free speech commitments, St. Olaf must revise its “Misuse of Computers” policy so that it targets only unlawful conduct like harassment and any other use that materially and substantially disrupts others’ use of resources. Please join us — again — in urging St. Olaf to review this policy.