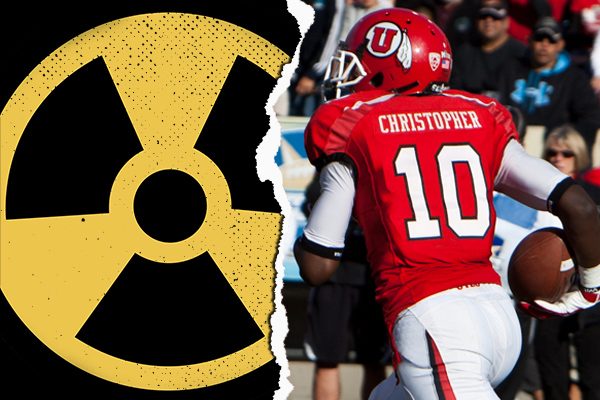 The “nuclear football” is supposed to be the sole purview of the president of the United States — but the University of Utah police department decided to give that phrase a brand new meaning by arresting a student for making an obvious joke about a nuclear reactor and the university football team.

According to a university statement, the university’s police department arrested 21-year-old University of Utah student Meredith Miller on Sept. 21 for posting “if we don’t win today, I’m detonating the nuclear reactor on campus,” on Yik Yak, a social media app where students can post messages anonymously.

The university police chief Jason Hinojosa justified the arrest by saying the university has “a zero-tolerance policy for these kinds of threats.”

“In the age that we’re living in, we have to take every threat seriously,” Hinojosa added. The department claimed Miller had “knowledge of the nuclear reactor” on campus and attended class in the same building as the reactor. (Utah is one of more than two dozen universities with nuclear reactors on their campuses.)

The police traced the post to Miller, who admitted writing it, and booked her into the Salt Lake County Jail. The police reportedly released Miller that same night after setting her bail at $5,000. She now faces one charge of making terroristic threats.

But as FIRE wrote to the Salt Lake County district attorney today, the school and its police department have made a Chernobyl-sized mistake.

While police departments should take every true threat seriously, they cannot violate students’ rights to free expression by arresting them for making jokes. The Supreme Court has repeatedly held that while “true threats” are a category of unprotected speech, they are very narrowly defined with a high bar for imposing punishment or liability.

As the Court held in Virginia v. Black (2003), a true threat is a statement by which “the speaker means to communicate a serious expression of an intent to commit an act of unlawful violence to a particular individual or group of individuals.” Likewise, in Watts v. United States, the Court held that an alleged threat to assassinate the president was actually protected political hyperbole, and that whether a statement is a true threat depends on factors such as the context of the statement, the conditional nature of the statement, the reaction of the listeners, and the extent to which a speaker employs obvious hyperbole or a similar rhetorical flourish.

As we note in our letter, some federal courts have held that for speech to constitute a true threat, the analysis hinges on whether the speaker subjectively intended to threaten,  rather than asking what a reasonable person would understand in hearing a potentially threatening statement. Plus, if the university really took her threat that seriously, why release Miller so quickly after arresting her?

Miller’s joke about having a nuclear-sized reaction to her team’s win record is not all that unusual. Sports fans and commentators are prone to hyperbole, and watching elite athletes perform commonly elevates fans to extreme emotional levels. Even regular sports occurrences—like home runs or long passes—are commonly described as “bombs,” “bullets,” “shots,” or “missiles.”

Because there appears to be insufficient evidence Miller made a true threat, FIRE has asked the DA not to charge her with any crime. We’ll also continue to monitor the situation to ensure the university, in its own right, does not investigate or punish Miller.

(And for what it’s worth, the University of Utah did win the game by a score of 35-7 over San Diego State.)