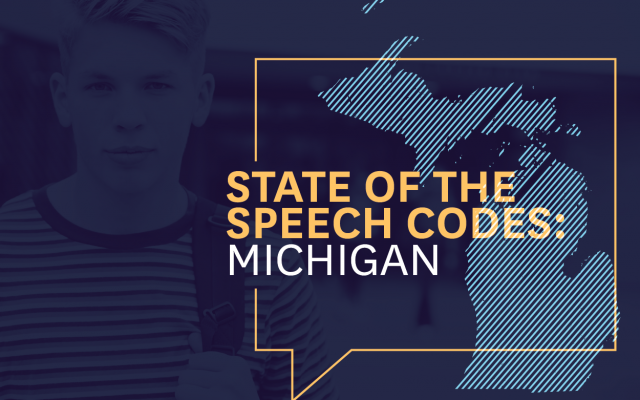 PHILADELPHIA, March 29, 2022 — A new study by the Foundation for Individual Rights in Education analyzes the state of free speech at 26 Michigan colleges and universities. “State of the Speech Codes: Michigan” finds that well over half of those colleges maintain free expression policies that restrict — or could too easily be interpreted to restrict — student speech.

“Too many Michigan college students study in the shadow of restrictive or overly broad policies that threaten their rights,” said FIRE Program Officer Ryan Ansloan, who authored the report. “I hope this report lights a fire under college admins to re-evaluate these policies and protect student and faculty rights.”

FIND OUT HOW MUCH PROTECTED SPEECH YOUR COLLEGE RESTRICTS

The report includes new research on policies at 11 institutions and reviews and updates the ratings of 15 institutions already included in FIRE’s Spotlight database. FIRE rates schools as “red light,” “yellow light,” or “green light” institutions based on how much speech protected by First Amendment standards their policies restrict in a number of categories, including “protest,” “online speech,” “harassment,” and “civility.” Private schools that promise free speech rights to their students are rated using the same standards as public ones, while private colleges that clearly place other values above free speech rights earn a “Warning” rating.

Only one of the institutions FIRE reviewed, Michigan Technological University, does not maintain any policies that compromise student expression, earning it FIRE’s highest green light rating. This rating is held by only 58 colleges nationwide. Meanwhile, half of Michigan’s institutions earned a yellow light rating. While less restrictive than red light policies, yellow light policies still prohibit — or have an impermissible chilling effect — on constitutionally protected speech and must be revised.

The report also notes that the kinds of restrictive policies adopted at Michigan universities, including technology and harassment policies, occur in Michigan with roughly the same regularity as they do in the rest of the country. The report analyzes the problematic policies by school and includes FIRE President and CEO Greg Lukianoff’s “five ways” university presidents can improve the state of free speech on campus.

Overly vague and broad policies can affect not only college students, but also faculty members. One such problematic policy at Ferris State University was recently used as an excuse to oust professor Barry Mehler. Mehler ran afoul of the university’s excessively broad Employee and Student Dignity Policy when he used profanity in a class introduction.

“It’s tempting to put off policy reform because policies seem theoretical, but bad policies can quickly lead to censorship and rights violations,” said Ansloan. “FIRE wants to make sure that doesn’t happen to other Michigan students and faculty.”

FIRE stands ready to defend students and faculty members whose rights are threatened on campus. We also invite college administrators to work with us to reform their institution’s policies.