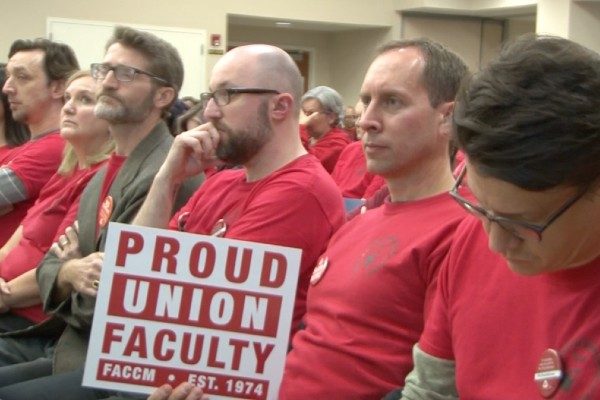 FIRE has written a number of times now on the pressures that the COVID-19 pandemic has put on universities’ finances, and how that has impacted faculty employment, including the usual protections tenure provides against sudden dismissal.

Keeping those trends in mind, FIRE is eyeing the situation at New Jersey’s County College of Morris, where six tenure-track professors suddenly found themselves non-renewed. (For untenured faculty at CCM, the administrative decision to renew or non-renew an academic appointment is made on a yearly basis.) All six faculty are active in CCM’s faculty union, the Faculty Association of the County College of Morris. Three of the six are officers; one is the current president.

The Faculty Association has responded to the layoffs by voting no confidence in CCM’s president, and has filed a complaint alleging unfair labor practices, describing the college’s actions as a targeted union-busting effort.

Inside Higher Ed reported the process by which the faculty were informed of their non-renewals:

The fired faculty members described getting calls around 3 p.m. on April 16 from administrators who, the faculty members said, read from scripts written by the college’s legal counsel. The dismissed professors were told the decision was not due to financial considerations and was based on declining enrollment, which the college expects to continue next year. The administrators said the college needed to reconfigure its ratio of tenured to nontenured faculty as a result of that trend. The decisions were confirmed at a Board of Trustees meeting April 20.

CCM’s claim that the action “was not due to financial considerations and was based on declining enrollment” seems a distinction without a difference. Declining enrollment means declining revenue, and declining revenue would very much inform the decision-making of an institution facing the prospect of staffing cuts, including to faculty. And to be fair to CCM, the institution, like many, has faced strong headwinds exacerbated by the pandemic. As Inside Higher Ed notes:

The college’s fall 2020 enrollment did drop more than 10 percent, to 6,697 students from 7,488 in fall 2019, a decrease consistent with the national average for community colleges during the COVID-19 pandemic. Enrollment at County College has fallen more than 16 percent since fall 2015, when 8,026 students were enrolled.

What’s more, earlier in the pandemic, CCM instituted some non-academic layoffs and furloughs, so it can’t be said that it went straight to taking the axe to faculty when the going got tough.

Laying off professors this close to the point where tenure protections would prohibit an institution from doing so sends a dreadful message — most of all to similarly untenured faculty, or to professors who might one day consider taking an appointment there.

Still, this latest move, against union-affiliated faculty specifically, sits badly and raises questions. In addition to their union involvement, the NJEA notes that all six of the dismissed professors were due for tenure within the next year. This adds a bad aftertaste to CCM president Anthony Iacono’s statement that “it would be irresponsible on behalf of the institution, in a period of such uncertainty with depressed enrollment, to plunge forward like we always have, as if we expect a rosy future.”

Laying off professors this close to the point where tenure protections would prohibit an institution from doing so sends a dreadful message — most of all to similarly untenured faculty, or to professors who might one day consider taking an appointment there. As the NJEA and others have also pointed out, CCM recently received $12.7 million in federal stimulus funding, which theoretically could be used, at least in part, to guard against faculty layoffs.

FIRE reserves for now the question of whether CCM has engaged in unfair labor practices. We can be fair to CCM, however, while citing the retaliation against faculty on full display at places like Collin College and Linfield University — which just this week fired a tenured professor without the barest hint of due process — to make the point that the CCM professors’ claims of retaliation are well within the realm of possibility.

It’s all too easy to imagine this case playing out in a manner that weakens tenure and shared governance, and therefore academic freedom. As I wrote of recent changes in Kansas’ system of higher education that ease the removal of tenured faculty, “In crucibles like the Great Recession and now that brought on by COVID-19, it’s too often the case that such crises result in the administration’s hand being strengthened at the expense of the faculty’s.”

We hope that isn’t to be the case at CCM.