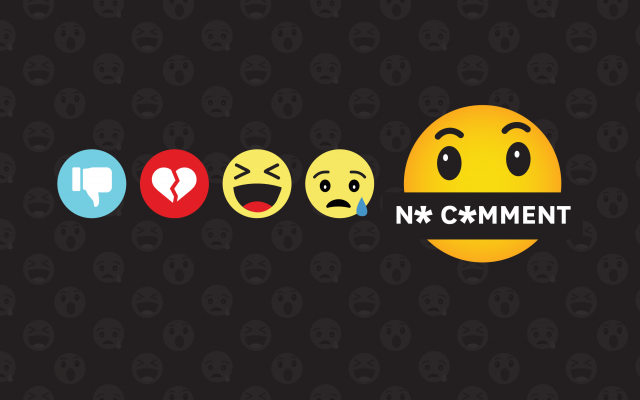 PHILADELPHIA, April 22, 2020 — The majority of top public colleges and universities use a blacklist of secret words, created by Facebook, to automatically censor comments on university social media pages, according to a new survey from the Foundation for Individual Rights in Education. As campuses sit empty and much of student life moves online, this censorship has an amplified importance.

FIRE’s report, “No Comment: Public Universities’ Social Media Use and the First Amendment,” utilized public records requests sent to more than 200 public colleges and universities in 47 states and the District of Columbia. The records from the 198 responding institutions reveal that almost half of the surveyed institutions — 49% — use Facebook’s “strong” profanity filter, and 28% use the “medium” filter to prohibit a list of words not disclosed to the public.

Additionally, 3 in 10 colleges or universities use a custom blacklist, collectively censoring 1,825 unique words and phrases. The lists provide a fascinating, behind-the-scenes look at what institutions censor. Consider:

Facebook’s automated content filters allow state institutions to automatically “hide” users’ comments if they contain words included on either Facebook’s undisclosed list of banned words or their own customized list. These tools enable public colleges and other government actors to quietly remove critical posts, transforming their Facebook pages from public forums into vehicles for positive publicity.

Yet courts across the country have held government actors’ social media sites, including those on Facebook and Twitter, to be subject to the First Amendment, which requires — at the very least — that restrictions not be based on viewpoint, and that any regulations be reasonable in light of the purpose of the forum. The most prominent of these decisions is a successful challenge to President Trump’s practice of blocking critics from his Twitter account. FIRE found that 87% of colleges blocked particular users on Facebook or Twitter.

Facebook CEO Mark Zuckerberg has defended Facebook’s policies, and in October called for a new generation to “continue to stand for free expression, understanding its messiness.” FIRE sent a letter with the Electronic Frontier Foundation to Zuckerberg today, outlining recommendations to restore free expression on the platform.

“State universities are preemptively censoring large swaths of protected speech and altering the public discourse with just a few clicks of the mouse — and Facebook gives them all the tools they need to do it,” said FIRE Executive Director Robert Shibley. “While social media makes it possible to amplify opinions, it also makes it easier than ever for government actors to silence Americans.”

FIRE’s suggestions to Facebook include releasing the contents of the secret blacklist, limiting the tools available to government accounts, and alerting users when their comment has been filtered on a government actor’s page.

“Around the country, our public institutions are quietly determining which specific words can be part of the public dialogue,” said Steinbaugh. “FIRE has spent years fighting this fight on campus, and protecting freedom of expression online is all the more important as the coronavirus pandemic drives our communities online.”

FIRE’s survey examines the state of social media in higher education since October 2018. We encourage the public to submit open records requests to public institutions to see how this censorship is evolving today.