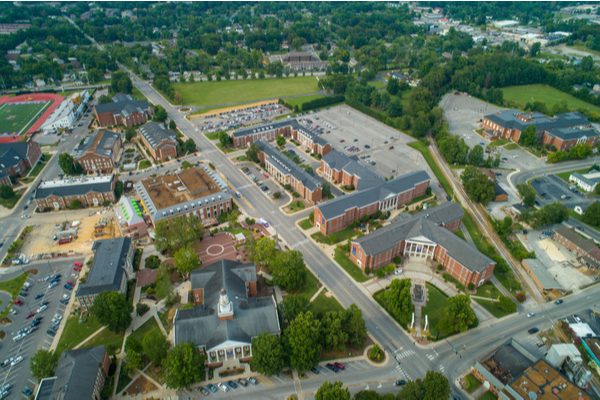 Tennessee Tech University is seeking to punish two professors for lampooning a local government official. By doing so, the university is disregarding the First Amendment, common sense, and its own policies promising faculty expressive rights. FIRE urges Tennessee Tech to reverse its disciplinary findings against the professors and refrain from punishing them for exercising their core First Amendment rights to engage in political expression.

This racist college professor thought it would be a great idea to help start a Tennessee Tech chapter for this national hate group, where racist students can unite to harass, threaten, intimidate and terrorize persons of color, feminists, liberals, and the like, especially their teachers. Their organization created a national ‘Professor Watchlist’ to harass and intimidate progressive educators, including many women, African-American and Muslim professors.

Professor Donadio and Turning Point USA: You are on our list. Your hate and hypocrisy are not welcome at Tennessee Tech. No unity with racists. Hate speech is not free speech. 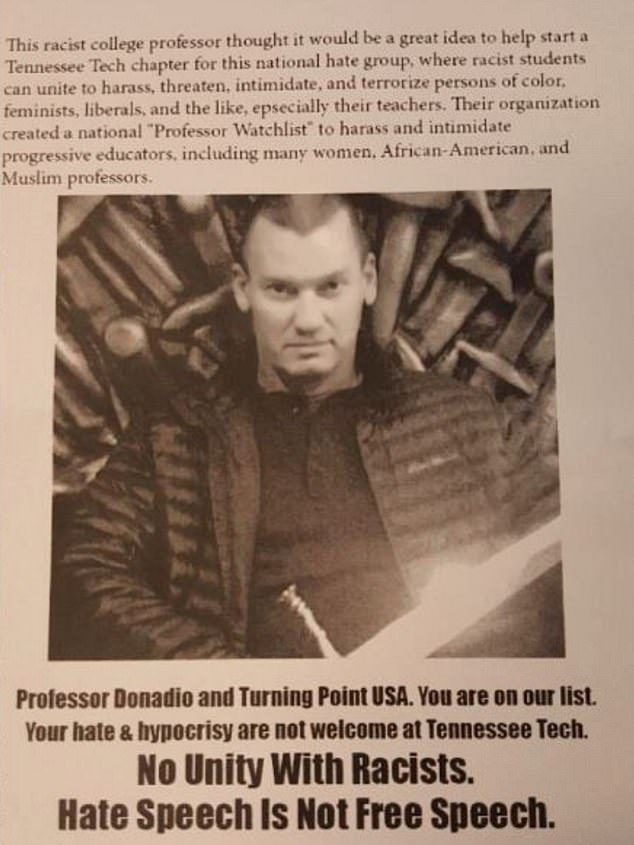 Gruber and Smith distributed the posters throughout the campus. After a few weeks, the axe fell — Tennessee Tech charged the professors with violating a litany of university policies on unprofessionalism, harassment, discrimination, threats, and intimidation.

Gruber and Smith refused to bend the knee. They hired an attorney to help argue to the administration that their expression was protected by the First Amendment and to explain how it falls squarely within the university’s commitment to uphold faculty free speech rights. But their plea fell on deaf ears and on April 24, Tennessee Tech found them responsible for all charges. They now await their punishment.

As faculty members at a state university bound by the First Amendment, these professors have the right to speak as private citizens on matters of public concern. They were undoubtedly speaking as private citizens, because university professors are presumably not paid to post political flyers on campus. And their criticism of a political group and a local government official clearly concerns public issues.

Although the flyer may have offended Donadio and others, the United States Supreme Court has held for decades that public universities may not punish individuals merely for offensive speech. In Papish v. Board of Curators of the University of Missouri, the Court found that a state college violated the First Amendment when it expelled students for distributing an underground newspaper featuring the front-page headline “Motherfucker Acquitted” with a “political cartoon . . . depicting policemen raping the Statue of Liberty and the Goddess of Justice,” darkly captioned “With Liberty and Justice for All.” The Court made clear that “the mere dissemination of ideas—no matter how offensive to good taste—on a state university campus may not be shut off in the name alone of ‘conventions of decency.’”

Concordant with the First Amendment’s robust protection for offensive speech is the danger posed by vague collegiality and professionalism regulations to professors exposing controversial political expression. A great deal of otherwise-protected expression, such as the flyer here, can be swept up by chilling invocations that faculty members transgressed professional standards or civility of collegiality. As FIRE has cautioned, such civility mandates tend to discourage the type of wide-ranging political and academic discourse that universities pledge to facilitate. Tennessee Tech, by escalating a political disagreement between professors into a punishable disciplinary matter, mischaracterizes the expression at issue and misapplies its collegiality policies to squelch protected speech.

As faculty members at a state university bound by the First Amendment, these professors have the right to speak as private citizens on matters of public concern.

Moreover, Smith and Gruber’s flyer is clearly parody, and falls far short of the legal standard for true threats or discriminatory harassment. Including the phrase “You are on our list” — reappropriating the aforementioned Turning Point USA’s own Professor Watchlist — does not even suggest violence and is far too vague to constitute a serious intent to commit bodily harm.

Further, the flyer fails to implicate a protected class such as race, gender, or any other immutable characteristic defined by state and federal law, as required by the university’s harassment and discrimination policies. Additionally, mere criticism of an individual’s or group’s political ideology fails to rise to the legal definition of peer harassment in the educational setting, which requires the conduct to be “so severe, pervasive, and objectively offensive, and that so undermines and detracts from the victims’ educational experience, that the . . . [victims] are effectively denied equal access to an institution’s resources and opportunities.”

Rather, the flyer represents pure political speech meriting the highest level of First Amendment protection. It is also squarely protected by Tennessee Tech’s robust protections for faculty expressive rights. In 2018, the university committed itself to

maintaining a campus as a marketplace of ideas for all Students and all Faculty in which the free exchange of ideas is not to be suppressed because the ideas put forth are thought by some or even by most members of Tennessee Tech’s community to be offensive, unwise, immoral, indecent, disagreeable, conservative, liberal, traditional, radical, or wrong-headed.

FIRE calls on Tennessee Tech to live up to its laudable commitment to free speech, and its legal obligations under the First Amendment by rescinding the disciplinary action taken against professors Smith and Gruber over their protected political expression.

Correction: A previous version of this story misstated the title of instructor Andrew Smith. FIRE regrets the error.