FIRE > Newsdesk > Top Story > The Catholic University of America’s ‘no cancellation policy’ talks the talk, but skips a few steps 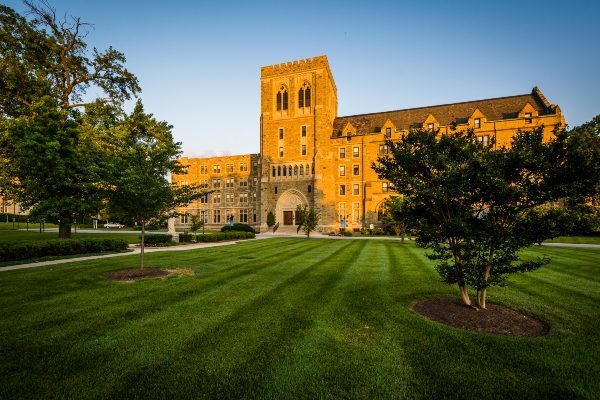 A small painting — well, two or three — is ruffling feathers at the Catholic University of America, and the university’s president is rebuffing calls for censorship by citing the university’s track record of defending freedom of expression.

The Catholic News Agency reports on the theft of a “blasphemous” painting last week:

A pieta painting displayed at The Catholic University of America’s law school that some see as depicting George Floyd in the place of Jesus was stolen Tuesday night, the school announced.

But in an email Wednesday, Nov. 24, President John Garvey said the artwork — which sparked a social media backlash and an ongoing petition drive demanding its removal  — has been replaced by a smaller version of the same painting that previously hung in the school’s campus ministry office.

Titled “Mama,” the painting, by artist Kelly Latimore, was installed in February outside the chapel at the university’s Columbus School of Law.

Lattimore has said the painting was commissioned to “mourn” Floyd, but when asked by an interviewer if the figure in the pieta is Floyd or Jesus, he responded ambiguously, answering “yes.”

In response to the theft, Garvey sent an open letter to the community condemning the theft and enunciating a “no cancellation” doctrine applicable to the university’s administration and beyond. Garvey wrote, in pertinent part:

It has been the University’s policy, throughout my time as President, not to cancel speakers or prevent speech by members of the community. Last Spring we applied this policy to an appearance by [former Director of Planned Parenthood, now pro-life activist] Abby Johnson. Consistent with that policy, we declined suggestions in this case that we take the image down. . . .

Our “no cancellation” policy does not apply only to the administration. We hope to continue to build on campus a culture that engages in thoughtful dialogue and debate, not the sort of bully tactics epitomized by this theft.

Garvey is right to condemn the theft of the painting. Stealing paintings — like stealing newspapers or destroying student displays — is a form of freelance censorship. The question of whether the university’s senior administrators could require staff or administrators to remove the painting is outside of FIRE’s mission, which is limited to students and faculty, and the display is that of the university’s administration. But the theft represents a threat to speech generally, not only subverting the speaker’s choice about what speech to support, but also undermining the ability of others to receive information — a corollary right of freedom of expression. Thieves intent on preventing expressive activity because they believe it to be offensive are unlikely to make rigid distinctions between whether the display was erected by students, faculty, or administrators. Their choice prevents others, including students and faculty, from choosing to see the display and judge its value or appropriateness for themselves.

So, too, is Garvey’s articulation of a “no cancellation” policy welcome. A steadfast refusal to censor anyone because of objections to their speech gives universities the ability to defend the right to expression without endorsing (or appearing to endorse) the speech itself. That can be an important tool when defending unpopular speech — and defending allegedly “blasphemous” speech at a Catholic university is not likely earning Garvey many allies.

But being able to credibly cite freedom of expression requires consistency. Garvey’s open letter implies that he recognizes as much, pointing to the university’s maintenance of a “no cancellation” policy “throughout” his tenure as president. He cites as an example his administration’s correct refusal to disinvite Abby Johnson.

But tell all that to John Tieso. Last year, Garvey’s administration — as it began to field inquiries from a local media outlet — directed Tieso, then an untenured lecturer, to shutter his Twitter account. Tieso’s tweets, the outlet reported, called former President Barack Obama “incredibly impotent and vain,” and said Obama, who was at an event in South Africa, “might consider staying in Africa and giving all his money to his people.” Another tweet described then-Sen. Kamala Harris as a “former escort,” a disparaging reference to allegations about her relationship with her political mentor.

FIRE wrote to Garvey shortly after Tieso was suspended, invoking the very principles Garvey now invokes to defend administrators. We explained that while Tieso’s tweets may be deeply offensive to others, they amounted to political speech. More importantly, they were extramural speech — that is, speech outside of the classroom and academic environment. (As for his conduct in the classroom? The local media outlet that pursued the story over Tieso’s tweets reported that “[w]hen asked about Tieso’s behavior toward students of color,” students “described it as respectful.”)

Catholic University of America promises the “unrestricted exchange of ideas.”

Why then did it just fire a professor for expressing his ideas?

Because his speech was extramural (where the university’s interest in policing speech is at its weakest) and political expression (where the interest in protecting the speech is at its highest), Tieso was a model candidate for Garvey’s no-cancellation policy. And, as our letter pointed out to Garvey, while CUA’s promises of freedom of expression, and its apparent “no cancellation” policy, wouldn’t have protected Tieso from getting an earful of criticism for his tweets — perhaps even from Garvey — they did promise Tieso protection from formal retaliation.

Garvey did not answer FIRE’s letter. A month later, the Catholic University of America fired Tieso.

If Garvey’s “no cancellation” policy is sincere and “does not apply only to the administration,” he should restore Tieso to his post. A “some cancellation” policy, which is what CUA has now, won’t provide much of a firewall against calls for censorship.