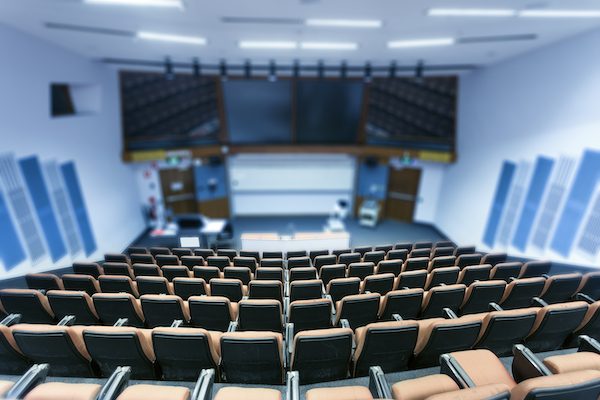 Trust in American institutions has steadily declined over the past half-century. But few institutions have experienced such a precipitous decline in the last several years as higher education. According to a 2018 Gallup poll, only 48 percent of Americans expressed “a great deal” or “quite a lot” of confidence in higher education — down 9 percentage points since 2015 alone.

This decline is often attributed to many factors. Rising tuition costs, for instance, have caused many students to begin questioning whether a four-year intellectual romp is worth a potential lifetime of student loan debt, which some pundits have compared to “indentured servitude.” What’s more, the coronavirus pandemic posed enormous economic challenges to higher education, and many universities are still reeling from its effects — if not outright shuttering their gates.

While affordability and COVID-19 are certainly important, ameliorating their impact would be tantamount to simply rearranging the deck chairs on the Titanic.

Properly addressing the present crisis of trust in higher education will require attention to a more fundamental concern: rediscovering the mission of a university.

Donald A. Downs, an Emeritus professor of political science at the University of Wisconsin-Madison writes in “Free Speech and Liberal Education” that every institution is defined by a distinctive mission that serves to justify the rights and privileges society affords it through “a kind of social contract–implicitly or explicitly.” Public trust in institutions declines, Downs argues, when they fail to live up to their mission “inherent to this covenant.”

Thus, properly addressing the present crisis of trust in higher education will require attention to a more fundamental concern: rediscovering the mission of a university.

Many Americans today understand higher education through the lens of credentials and career. There is nothing necessarily wrong with this vision. Indeed, across their working lives, those who graduate from universities earn a substantial income premium over those who do not. But much is lost when the university is seen as merely a credentialing factory for the professional caste.

A more encompassing mission for the university is needed and, thankfully, available. While universities differ widely in their operational structure and in the particular norms and practices that shape their campus communities, they are each recognizably engaged in one common enterprise: the pursuit of truth.

This endeavor finds its origins in the earliest conception of a university as a medieval institution wherein the search for biblical truth was ascendant. The Latin mottos “Veritas” (Truth), on Harvard’s coat of arms; and “Lux et Veritas” (Light and Truth), on Yale’s, harken back to those times. Centuries later, however, the quest for theological truth gave way to Enlightenment sensibilities and the modern, secular research university emerged. Logic, reason, and empiricism became seen as indispensable tools in the search for objective truths about nature, humanity, and the cosmos.

Yet, an important distinction must be made between the truth-seeking mission of the pre-modern and modern universities. The former believed that “truth” was a known quantity  — located in archaic texts and discernible through a close adherence to the scholastic method. As such, the role of the pre-modern university was to guide its students towards “the Truth.”

However, the latter, informed by a classically liberal tradition, was vexed by what John Stuart Mill in “On Liberty” referred to as the “mere conformers to commonplace, or the time-servers for truth” who were content with parroting conventional wisdom and uninclined to examine its veracity. Under such conditions, people find themselves clinging to “dead dogma, not a living truth.”

It follows that if the university seeks the legitimate pursuit of truth–as opposed to dogma– then it must foster an environment in which even the most cherished beliefs are subject to vigorous and careful scrutiny. The most effective tools for this, as Mill argues, have long been free speech and open inquiry.

Thus, robust commitment to these values has become a defining characteristic of the modern university — leading some scholars to refer to it as a quintessentially “First Amendment institution.” Likewise, FIRE’s mission statement emphatically declares “that colleges and universities play a vital role in preserving free thought within a free society.”

Through conducting a brief content analysis of mission statements from America’s top 25 universities, I was shocked to find the word “truth” appeared only once.

Admittedly, when I first arrived on campus just a few years ago I did not perceive higher education in these terms. I, like many Americans, embraced the careerist vision of higher education — the obligatory next step toward socio-economic stability and professional success, rather than as an ideal venue for the pursuit of truth.

But can I be blamed? The notion that universities are in the business of truth-seeking seems to be lost on the leaders of the institutions themselves.

Through conducting a brief content analysis of mission statements from America’s top 25 universities, I was shocked to find the word “truth” appeared only once (Duke University’s mission statement being the anomaly). But other themes frequently emerged across each university’s statement, such as citizen-leadership, public service, solving real-world problems, producing knowledge, and embracing diversity.

Of course, the university is free to pursue a variety of missions and serve as many functions and purposes it pleases. But problems emerge when the truth-seeking mission is obscured by competing concerns and values. In the worst cases, peripheral missions don’t merely detract attention and resources from the university’s primary obligation to truth — they actively threaten it.

Consider the recent emergence of “DEI statements” in university hiring, promotion, and reappointment practices whereby prospective and current faculty are required to express a demonstrable commitment to an often narrowly defined conception of “diversity, equity, and inclusion.”

FIRE has been rather critical of DEI statement policies on the grounds that they are generally “incompatible with free expression and academic freedom.” FIRE argues that these policies, while perhaps well-intentioned, “can too easily function as litmus tests for adherence to prevailing ideological views, penalize faculty for holding dissenting opinions on matters of public concern, and ‘cast a pall of orthodoxy’ over the campus.”

These requirements and other proliferating DEI initiatives challenge the truth-seeking mission of the university by undermining the commitment to free speech and academic freedom — a requisite condition for truth-seeking and a constitutive element of the institution. As such, declining confidence in higher education may be the by-product of the university’s abdication of its truth-seeking mission because it lies at the heart of the social contract agreement — codified centuries ago — by which the institution obtained the rights and privileges it enjoys today.

Remedying higher education’s lagging reputation thus requires a return to the value of truth. This may appear to be a fool’s errand. During the time that confidence in higher education has declined, respect for the truth seems to have done the same. The frenzied and fragmented media and public response to the coronavirus pandemic alone provided ample evidence for the pervasiveness of what the RAND corporation has dubbed “truth decay.”

While recent trends may make rediscovering the truth-seeking mission more difficult, they also make executing on this task all the more necessary. The university — of all places — should not throw up its hands in defeat but rather embrace its primary mission and begin rebuilding America’s trust in the institution of higher education.

Bobby Ramkissoon is a rising senior at the College of Wooster and a FIRE summer intern.