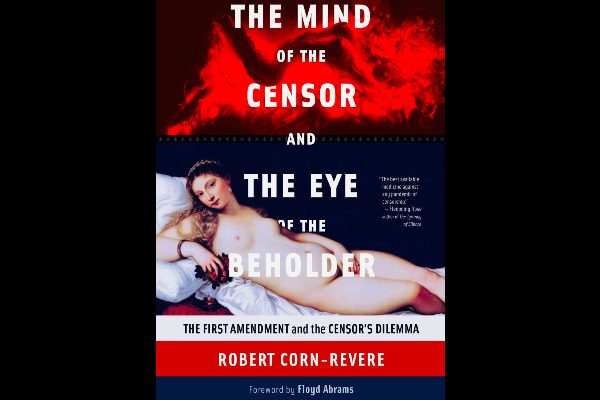 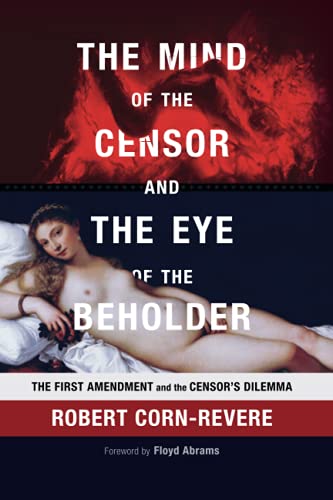 Robert Corn-Revere’s new book, “The Mind of the Censor and the Eye of the Beholder: The First Amendment and the Censor’s Dilemma,” follows the evolution of America’s free speech culture from the nineteenth century to the present. He starts that journey with the story of a man named Anthony Comstock.

To students of the First Amendment, Comstock  (1844-1915) is a familiar villain, because a surprising amount of America’s free speech movement can be traced back to the uniquely addled psyche of the crusading postal inspector. Comstock is a character so improbable that he would be considered poorly written if fictional, because the absurdity of his life would frustrate the suspension of disbelief.

Comstock was physically attacked at various points in his career: once stabbed in the face by a publisher; attacked by a former prize fighter; and punched repeatedly during a court proceeding by an opposing attorney, with a contemporary newspaper reporting that the commissioner overseeing the hearing imposed no punishment, and in fact “said something under his breath about some things being deserved.”[1]

Along the way, Comstock arguably did more to inspire our eventual understanding of the First Amendment than any other individual of his era, forcing his opponents to think harder about the parameters of free speech and the often impossibility of separating sex from politics. The organized opposition to Comstock’s crusade resulted in the formation of a nascent free speech legal bar several generations before the First Amendment was given real teeth by the Supreme Court. To put it another way, free speech culture in the United States coalesced nearly 50 years earlier than it probably would have, thanks to Anthony Comstock’s paranoid obsession with “self-abuse.”

In a future post, we’ll look deeper at exactly how that coalition formed. But it would be too much to cover without first introducing you to Comstock himself.

Anthony Comstock was born in the sleepy town of New Canaan, Connecticut, in 1844 to farmer parents and was raised alongside nine siblings, seven of whom would live to adulthood. His father led a daily prayer service at the local church, and Anthony took a special shine to lessons on the sin of vices, lessons he would soon revolve his entire life around.

At age 18, Comstock began his strange career of volunteer public service. A townsperson told Comstock that a dog was terrorizing children in the town, and entreated him to take care of it. Comstock loaded his gun, went out and killed the dog by himself. He missed his shot to kill a second rabid dog, and was narrowly saved by a neighbor. Comstock told this story as early proof of his own righteousness and God’s favor on his work.

But it wasn’t just the town’s physical safety he appointed himself to protect. It was the moral safety as well. According to Comstock, he confronted the town’s sheriff about the owner of the first dog, who ran a saloon, where he, as Comstock alleged, would sell liquor to women and children who could not buy it legally. When the sheriff refused to act to Comstock’s satisfaction, he broke into the saloon, drained all the liquor barrels, and left a note threatening to destroy the building if the saloon owner didn’t leave town. The saloon owner departed before Comstock could add arsonist to his resume.

He enlisted in the union army, where he kept a journal detailing his frustrations with the poor morals of his fellow soldiers, namely their profanity, gambling, and drinking. He made a point of pouring out his whiskey ration where he could be seen to do so by his fellow soldiers — presumably to their abject horror. It is likely that Comstock was also aware of the pornography circulated by soldiers and their penchant for prostitutes.

Following his enlistment, he moved to New York City to work as a salesman, where he lived in lodging houses with other men who he found no more moral than his fellow soldiers. In 1866, Comstock joined the Young Men’s Christian Association (YMCA) where he found fellow travelers in his moral crusade against sin, specifically against sexually explicit content, which he would spend the rest of his life fighting.

Comstock began buying sexually explicit and pornographic books and pictures, and then reporting the sellers to police for arrest and prosecution. In 1873, Mr. Comstock went to Washington, D.C. on a mission from the YMCA to come back with a federal law they could use to fight the spread of obscene materials. He went armed with condoms, bawdy pulp novels, sex toys, and scandalous pictures he had procured during his personal war against private sellers of explicit materials, which he showed to horrify legislators and spur them into action — which he called his “Chamber of Horrors.” 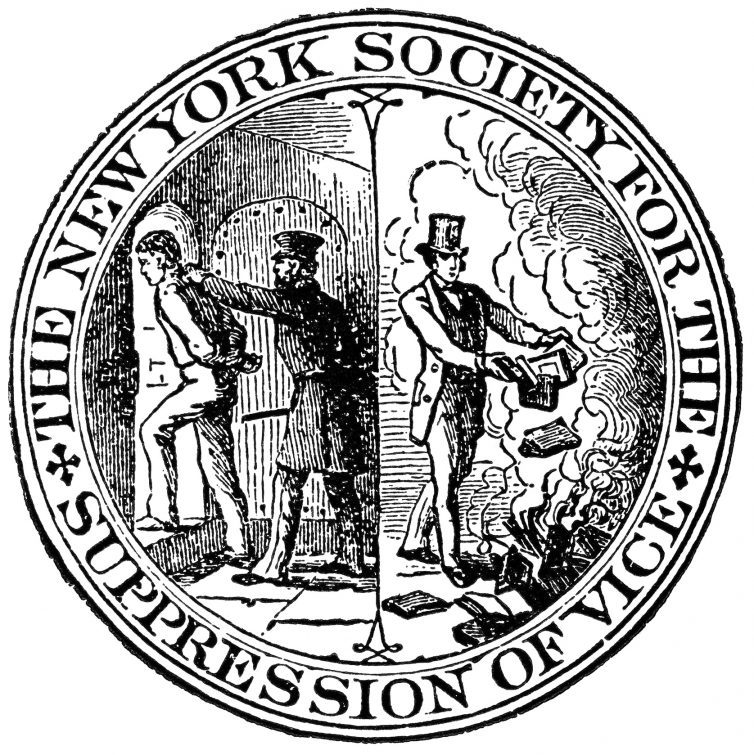 Seal from the New York Society for the Suppression of Vice, 1873. You might be part of an evil quasi-governmental organization if your logo includes book burning.

The “Comstock laws” he received were of staggering breadth. Most notably, they banned the mailing of anything “obscene, lewd, or lascivious, [or] of an indecent character” and also the mailing of contraception or advertisements of contraception. (If this strikes you as just a tad unconstitutional, you’re right, but unfortunately this episode predates the First Amendment having meaningful legal power in courts.)

Comstock’s crusade did not end at the enactment of this law. He was designated a “special agent” of the Post Office Department, and he founded with the YMCA the New York Society for the Suppression of Vice (NYSSV), an organization dedicated to the enforcement of the Comstock laws. NYSSV, despite being a private, religious organization, was deputized by the state of New York to carry out this mission themselves, with legal rights to search, seize, and arrest and to keep for themselves 50% of any fines levied against those prosecuted.

And hoo boy, did they. By the end of 1873, the same year the law was enacted, Comstock had arrested fifty-five people, twenty of whom were convicted. As Corn-Revere notes, Comstock was prone to inventing numbers, but by the time of his death in 1915, his obituary repeated the numbers from his records, which claimed his crusade had resulted in 3,697 people brought to court; 2,740 found guilty; fines of $237,134.30 (over $6 million in modern currency); nearly 566 years of jail time; and, most repellent of all, 15 targets driven to suicide.

It would be an understatement to say the circumstances of many of the convictions did not rise to the highest standards and ideals of the American legal system. It was Comstock’s belief that juries should not be harmed by being exposed to obscene material, so in many cases they never saw or heard exactly what defendants were accused of creating, buying, or selling. Indeed, Comstock had often incinerated the evidence before trial — a practice that would lead to an acquittal in modern times, but that Comstock felt was necessary to avoid the corruption of the jurors.

And what material was the cause of all of this? Quite a range, from truly pornographic novels like “Fanny Hill” and baudy playing cards featuring exaggerated nude bodies, to what basically anyone would consider in modern times to be literature, and high art. He seized printing plates and novels such as Giovanni Boccaccio’s “The Decameron,” and would seize reproductions of famous European paintings, such as Alexandre Cabanel’s “Birth of Venus.” Comstock would sometimes pursue the artists of such work, but was content to attack whoever possessed a copy of the work itself. 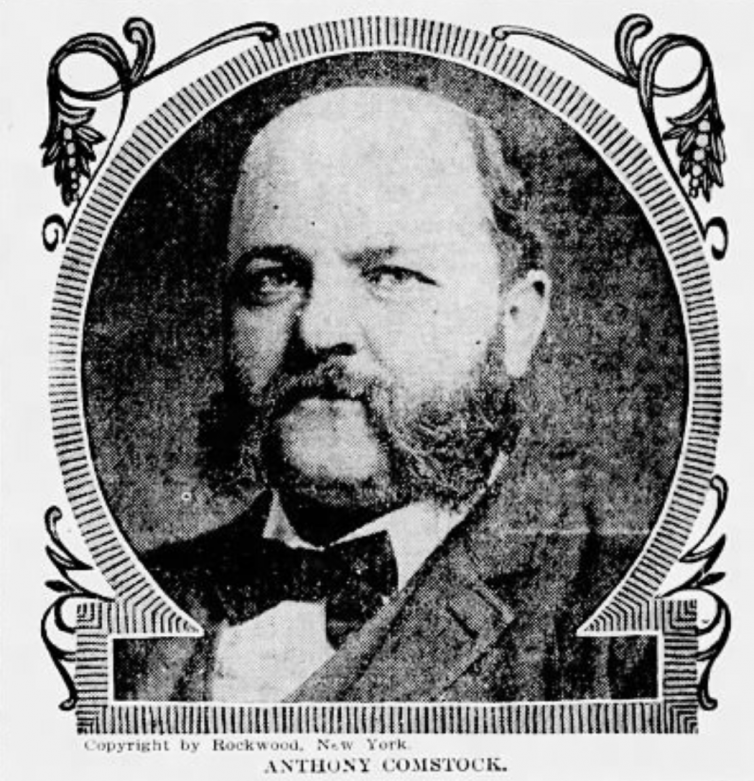 Comstock’s tenure as postal inspector would last 42 years; his charm and tactics would lead him to eventually wear out his welcome with a large segment of the public. A syndicated news report from New York in 1913 would say Comstock “has made himself the laughing stock of the town so many times that his ‘raids’ have ceased to arouse any interest.”[2] Comstock would officially step down from his role as postal inspector on June 30, 1915. He died three months later, aged 71.

For a time, the Evergreens Cemetery in Brooklyn listed his gravesite in a list of “quirky characters,” but his listing was eventually removed. Many of the works he targeted are primarily discussed today because he targeted them. And while Comstock’s infamy has evaporated, the legacy of opposition to his work remains; his opponents would form the Free Speech League, a group that started work that would be picked up on later by the ACLU and drive our current tolerant speech environment.

The paperback and Kindle versions of “The Mind of the Censor and the Eye of the Beholder: The First Amendment and the Censor’s Dilemma” will be released on Thursday. And while you’re ordering, if you enjoy books about free speech, it’s a good time to pre-order Jacob Mchangama’s forthcoming “Free Speech: A History from Socrates to Social Media,” which releases in February 2022!

[1] Punches Mr. Comstock: Hugh Gordon Miller, New York Lawyer, Thus Resents Being Called a Liar by Vice Suppressor. The Fall River (Mass.) Evening News, March 10, 1906, at 6. Miller, a former U.S. Attorney from Virginia, was defending a client accused by Comstock of mailing obscenity and claimed that Comstock’s was “brow-beating” the accused on the stand. Comstock called Miller a liar. The paper quotes Miller, after the fight: “In my country you’ve got to back yourself up with more than words when you call a man a name like that.”