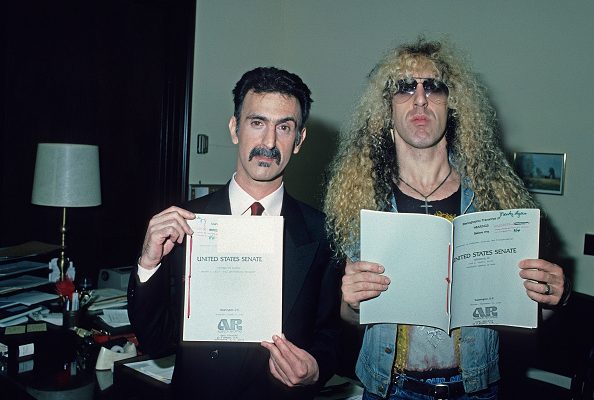 Almost as soon as music could be recorded and broadcast to audiences across the country, there were attempts to ban certain songs for supposedly corrupting morals. Elements of music censorship in America were born with Billie Holiday’s “Strange Fruit,” which was banned from several Southern radio stations in the 1940s for its graphic criticism of racism and segregation. Elvis Presley’s shaking legs were banned from television performances because they were thought to drive young, innocent children into sexual indulgences. The British got a taste of American censorship in the 1960s when the Rolling Stone’s “I Can’t Get No Satisfaction” was banned from several US radio stations for its sexually suggestive lyrics. In 1985, music censorship came to the public forefront when the Parents Music Resource Center attempted to add a rating system to the “porn-rock” of the time

The PMRC was founded to draw attention to and denounce rock music’s rise in violence, drug advocacy, and lewdity. The drive to begin this initiative started with Mary “Tipper” Gore (then-wife of then-Senator and future Vice President Al Gore) and Susan Baker (wife of Treasury Secretary James Baker) being approached by their children regarding sexually explicit lyrics from Prince’s “Darling Nikki” and Madonna’s “Like a Virgin.”

Appalled, they decided to organize and combat this purported corruption themselves. Their overarching goal, in the name of protecting their children, was to create a rating system that would ostensibly help “educate and inform parents about this alarming trend [of harmful lyrics] as well as to ask the industry to exercise self-restraint.”

The PMRC viewed music as partially responsible for an increase in sexual and violent crimes, as well as suicide among teenagers. They demonstrated their claims with a series of statistics they believed proved that music harms teenagers.

Through their political connections, the PMRC was able to arrange a hearing before the Senate Committee on Commerce, Science, and Transportation. The hearing’s purpose was to “provide a forum for airing the issue itself [and] . . . bringing it out into the public domain.”

It was not lost on the public that this hearing was happening very publicly in front of a Senate committee. The PMRC’s opponents became concerned by senators expressing their personal distaste for the music, as well as showing interest in potential legislation, with Sen. Ernest Hollings stating, “if I could find some way constitutionally to do away with it, I would.” Thus, while the PMRC insisted it had no intentions to create legislation, there was, at the very least, ambiguity surrounding the issue.

Zappa’s next album after the hearing, “Jazz From Hell,” would receive Parental Advisory stickers. The album was entirely instrumental.

Avant-Garde rock composer Frank Zappa was one of the few artists who stood up in opposition to this proposed rating system. In testimony on September 19, 1985, Zappa told the committee that the PMRC proposal was “an ill-conceived piece of nonsense which fails to deliver any real benefits to children” and “infringes the civil liberties of people who are not children.” Zappa asserted that the system “read like an instruction manual for some sinister kind of toilet training program to house-break all composers and performers because of the lyrics of a few.”

One of his strongest arguments was that it was “unfortunate that the PMRC would rather dispense governmentally sanitized heavy metal music than something more uplifting. Is this an indication of PMRC’s personal taste or just another manifestation of the low priority this administration has placed on education for the arts in America?”

Zappa’s quote highlights a key problem with art censorship: all censorship is subject to someone’s individual tastes. To find anything offensive or objectionable is to say that you are offended by it, but that does not mean everyone is affected equally. A different parent may have been glad their child came across the song “Like a Virgin” because it could provide them with an opportunity to educate their child on sex and the language surrounding it.

While the PMRC’s rating proposal would not have censored any music per se, it would have limited access to certain albums by requiring stores to keep them behind the desks because of their explicit nature. This would require those interested in buying certain music to ask employees for the album rather than finding it in record bins among the rest of the music.

Art censorship is often claimed as necessary to prevent children’s exposure to particular works of art. The problem is that attempts to sanitize society for children have effects on people who are not children. This is concerning because it means the general public becomes less able to discuss mature topics explored by influential artists.

Zappa stated later in his testimony that “bad facts make bad law, and people who write bad laws are in my opinion more dangerous than songwriters.”

In questioning by the committee, Sen. Paula Hawkins asked whether Zappa objected to children’s toys rated as suitable for specific age ranges, to which he responded, “In a way, I do because that means that somebody in an office someplace is making a decision about how smart my child is.”

In the end, the music industry adopted a voluntary warning sticker that would evolve into the iconic parental advisory sticker.

The same arguments for censorship have been repeated countless times throughout history, and even today. This is evidenced by the banning of books in public schools, as some view certain books as too advanced for young children. For every parent who does not want their kid exposed to the mature themes of, for example, “To Kill a Mockingbird,” there is a parent who does not want their kid shielded from things they may encounter in the world. Literary censorship persists today with book bannings surrounding the topics of sexuality and race.

In the end, the music industry adopted a voluntary warning sticker that would evolve into the iconic parental advisory sticker. The sticker became a symbol of rebellion and another example of how censorship of art can backfire and make the censored art more popular.

Zappa’s next album after the hearing, “Jazz From Hell,” would receive Parental Advisory stickers. The album was entirely instrumental.

John Ivers is a rising senior at University of Wisconsin-Madison and a FIRE summer intern.