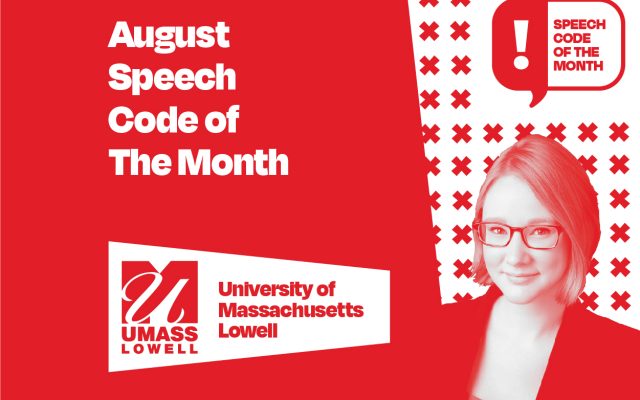 Most of the internet is apparently off-limits for students at the University of Massachusetts Lowell.

The school’s Acceptable Use Policy, which governs the use of computing and networking resources, prohibits students from intentionally transmitting, communicating or accessing “offensive” material. Every month, the Foundation for Individual Rights and Expression highlights a university policy that hinders students’ free expression. Since most online content could be called offensive by someone, the policy has earned the dubious honor of FIRE’s August Speech Code of the Month.

The Supreme Court has explicitly held, time and time again, that speech cannot be restricted by the government merely because it offends others. In Texas v. Johnson (1989), the Court held that burning the American flag was protected speech, explaining: “If there is a bedrock principle underlying the First Amendment, it is that the government may not prohibit the expression of an idea simply because society finds the idea itself offensive or disagreeable.”

A policy like this makes it all too easy for the university to crack down on select, disfavored speech.

In spite of such clear precedent, colleges and universities routinely ban offensive speech in campus speech codes, especially in IT policies. Whether a person is burning a flag at a protest or advocating for (or against) flag burning on Twitter, a ban on “offensive” speech calls for impermissible viewpoint discrimination.

UMass Lowell couldn’t possibly take action every time someone views or retweets something subjectively offensive over university wifi — every single student, and probably every professor, would be on trial. But a policy like this makes it all too easy for the university to crack down on select, disfavored speech.

Take FIRE’s recent lawsuit challenging viewpoint discrimination at Clovis Community College. When three conservative students received permission to post flyers listing the death tolls of communist regimes, administrators ordered them removed, saying it may have been a “mistake” to approve them instead of censoring them under a policy that states: “Posters with inappropriate or offense [sic] language or themes are not permitted and will not be approved.”

FIRE stands ready to assist UMass Lowell — as well as any other colleges and universities with restrictive speech codes — in revising its policies.

Before UMass Lowell’s policy is applied in a similar way to restrict protected speech, the university should revise it to provide only viewpoint-neutral regulations on expression.

The policy currently earns our worst, “red light” rating for placing a clear and substantial restriction on free speech, putting UMass Lowell in the bottom 18.5% of schools rated in FIRE’s Spotlight database. This is UMass Lowell’s only red light policy, so if it were to make revisions, it could improve to earn an overall “yellow light” rating, a big step forward for free speech.

FIRE stands ready to assist UMass Lowell — as well as any other colleges and universities with restrictive speech codes — in revising its policies.

Schools:  University of Massachusetts at Lowell