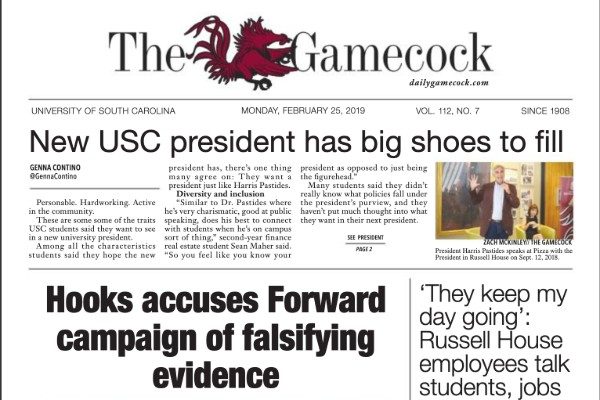 Campus police are investigating the theft of 500 copies of the student newspaper at the University of South Carolina, according to a report on the paper’s website.

The Daily Gamecock, which typically has a circulation of 5,000, published a February 25 edition (pictured above) with front-page stories on the new university president, a student government hearing that found insufficient evidence to back up alleged campaign violations, an upgrade to elevators in a dorm building, and a feature on student union workers.

According to the newspaper, two men were seen on security footage removing papers from racks in stairwells, but have not yet been identified. Others were photographed removing papers from the library. Racks were also emptied in two other campus buildings. It’s not clear what the motive was; perhaps they were doing an art project that required a lot of paper, or maybe they wanted to prevent others from reading something embarrassing. Whatever the goal, the theft burdens an expressive outlet.

On Twitter, some questioned whether emptying the stands of newspapers is really theft.

How is this theft? They’re free and just chillin outside for anyone to take. Not even a “one per non-paying customer” sign ? #FakeOutrage

Like many student newspapers, The Daily Gamecock prints a notice on page two of the publication that the first copy is free, while additional copies are $1 and must be purchased from the Student Media offices.

Even absent such a policy, however, taking a large quantity of free newspapers is theft. At first blush, it can seem counterintuitive that you can steal something that’s given away. But the very fact that it can be given away means that the newspaper is property, and the owner of property can choose to give it away one at a time, and defend that right with the authority of the law.

In the case of a newspaper, it deprives them of the circulation that advertisers pay for, as Tori Richman, Editor in Chief of The Daily Gamecock, pointed out on Twitter:

Businesses have paid to have their ads published in our paper. Their money is lost if papers are missing and not being seen. As a newspaper, we respect free speech. Send a letter to the editor, email us or dm us to tell us how you feel, but don’t steal our papers to do it.

The Daily Gamecock’s print edition comes out weekly; it’s updated regularly on its website, and has published (sometimes “Daily,” sometimes not) since 1908. But the weekly frequency of the print edition makes having the racks stand empty for so long that much more painful.

FIRE will watch this story as it develops.