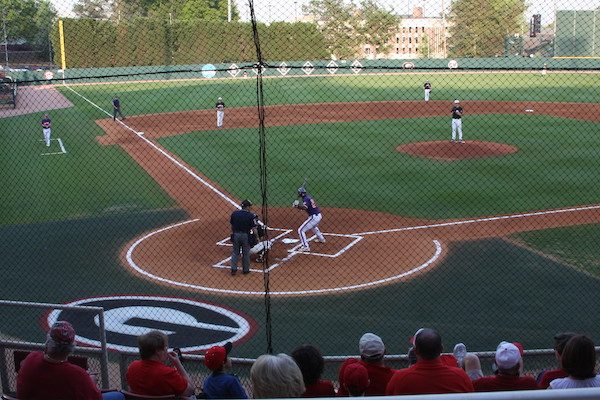 Last September, a well-known name around my university campus, the University of Georgia, came back into the limelight. Adam Sasser, a former baseball player, filed a lawsuit against UGA and several university officials for allegedly violating his First and Fourteenth Amendment rights.

Sasser is perhaps best remembered at UGA for using a racial epithet to refer to former-quarterback Justin Fields while in the stands of a UGA football game in 2018. Following the game, Sasser was removed from the baseball team and suspended from attending classes in person for the remainder of the semester.

When Sasser filed the lawsuit in federal court, I was just settling into my role as a reporter for UGA’s independent, student-led newspaper, The Red & Black. I pitched an article about the First Amendment implications of Sasser’s case.

Questions about the First Amendment and the extent to which it protects students were already at the forefront of my mind after it was reported that, over the summer, a student at my high school posted racist comments about Asians on social media to express her frustration with not receiving a graduation ceremony due to the pandemic.

Some policies restricting how student-athletes express themselves online run afoul of the First Amendment.

I understood the basic principles of how the First Amendment extended protections to what is colloquially referred to as “hate speech,” which usually refers to racist, sexist, or otherwise hurtful remarks. I also understood that these protections can be limited in high school, as well as college, if the words rise to the level of harassment, incitement of imminent lawless action, or constitute a true threat against an individual or institution.

It did not occur to me that the rights of student-athletes in the college environment may be different than those of non-athlete college students until I spoke about Sasser’s case with Frank LoMonte, a media law professor at the University of Florida and director of the Brechner Center for Freedom of Information.

LoMonte explained that while First Amendment protections apply with few exceptions to students at public universities, student-athletes at the same schools are often expected to abide by a more rigid code of conduct. Administrators may argue that it is reasonable to scrutinize the behavior of student-athletes because they wear university colors and can be viewed as representatives of the institution.

UGA outlines in its handbook for student-athletes that, while on social media, student-athletes “have the right to express opinions outside of [their] participation in athletics,” but they may be subject to program discipline if the speech occurs “in any situation in which [they] are acting as a representative of the Athletic Association” or “holding [them]self out as a UGA student-athlete.”

Vague descriptions of punishable speech can also deter student-athletes from speaking out.

The policy likely leaves many student-athletes wondering when, according to UGA, they are “acting as a representative” of the university as opposed to acting in their individual capacities.

The lack of clear and concise guidelines is likely to create confusion among student-athletes and may have a chilling effect on those attempting to use their platforms to speak out about issues of public concern.

Vague descriptions of punishable speech can also deter student-athletes from speaking out. Per the policy set out by UGA’s athletic association, examples of speech that may be subject to program discipline include “derogatory … language about others,” as well as descriptions or depictions of unlawful conduct.

Under this policy, a student-athlete could be punished for tweeting explicit song lyrics if they contain derogatory language. This was the case in 2012 when Florida State University football player Tyler Hunter tweeted lyrics from rapper Lil’ Boosie’s song “Fuck the Police x 10.” According to a statement from coach Jimbo Fisher in the Florida Times-Union, Hunter was punished internally. Fisher also moved to institute a social media ban on FSU football players.

The existence of such policies can also inhibit student-athletes from expressing opinions about their sport. Until 2020, former Clemson quarterback Trevor Lawrence would not have been able to start the #WeWantToPlay campaign to protest football season cancellations during the pandemic due to a nine-year ban on Clemson football players’ social media use during the season.

Broad social media policies that seek to prevent behavior under difficult-to-discern circumstances are inadvisable and deter student-athletes from using their platforms to exercise their First Amendment right to freedom of speech.

In its recent decision in Mahanoy Area School District v. B.L., the Supreme Court of the United States held that a high school student-athlete — specifically, a cheerleader — had a First Amendment right to post the message “Fuck school fuck softball fuck cheer fuck everything” on social media. The student’s school and similarly-situated schools nationwide, the Court said, have an interest in protecting —  rather than censoring — student expression, “especially when the expression takes place off campus.” Courts have held that a student’s affiliation with a sports team does not strip that student of their First Amendment rights. In his concurrence in Mahanoy, Justice Samuel Alito noted, “unflattering speech about a school or one of its programs is different from speech that criticizes or derides particular individuals.”

While the Court ultimately sided with the student in Mahanoy, it did ponder that K-12 schools may have some right to regulate off-campus student speech. However, the same shouldn’t be said for colleges and universities: Justice Alito also noted that the Court’s decision did not implicate speech rights in higher education. Explicitly, he noted that “regulation of their speech may raise very different questions from those presented here.”

One lingering question is the extent to which student-athletes’ speech is protected because, as LoMonte noted during our conversation, student-athletes exist somewhere on the spectrum between students and employees.

College athletes: Students, employees, or something else?

Employees of a public university, or any other government employer, have a First Amendment right to speak as a private citizen on matters of public concern, so long as their speech does not interfere with their work.

But, as LoMonte wrote in the Nebraska Law Review, “[t]here is little legal basis for treating athletes as employees, and in fact, colleges have fought for decades to characterize athletes as ‘students’ rather than ‘employees’ because employee status would be economically disadvantageous.”

In any case, broad social media policies that seek to prevent behavior under difficult-to-discern circumstances are inadvisable and deter student-athletes from using their platforms to exercise their First Amendment right to freedom of speech.

Student-athletes are a valuable asset to my campus. They are also valuable members of the community. With this in mind, I hope to see UGA, and other campuses with robust athletic programs, demonstrate through policy changes a greater commitment to the speech rights of student-athletes.

Emily Garcia is a junior at the University of Georgia and a FIRE Summer Intern.