FIRE wrote to the University of California, Davis (UC Davis) last month to express our concerns about a mandatory “Violence Intervention & Prevention” (VIP) online program which requires students to affirm that certain phrases—all of which are constitutionally protected expression—are “problematic.” Students who do not complete the program cannot register for classes. As we explained in our letter, the Supreme Court has repeatedly held that state actors (such as, in this case, a public university like UC Davis) may not compel individuals to adopt certain viewpoints. Unfortunately, though, UC Davis counsel Michael Sweeney’s response to FIRE indicates he does not understand this important principle.

The VIP program consists of a series of slides relating to sexual assault and stalking. One module of five focuses on “Attitudes and Beliefs That Normalize Violence.” A section of that module on “Harmful Language,” for example, instructs students that phrases like “I’d hit that!” or “I stalked him/her on Facebook” can “perpetuate a community’s tolerance of inappropriate attitudes and behaviors.” Next, students are directed to “[m]atch … words/phrases with why they are problematic.” There is no option for students to argue that the phases aren’t problematic, or to simply acknowledge that the phrases are considered problematic by many. Students must agree that they are problematic. 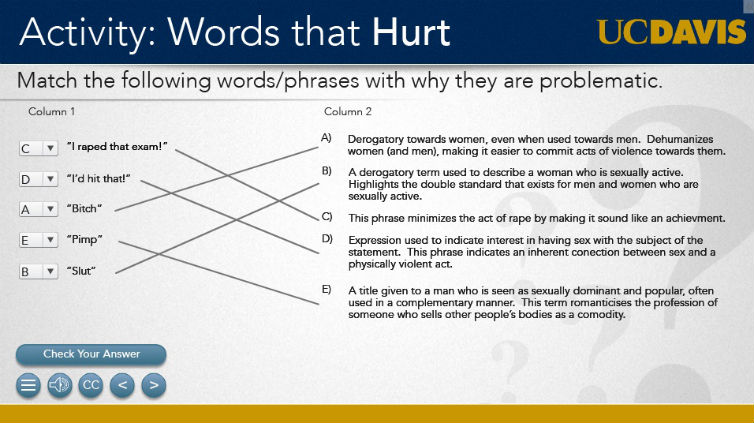 As FIRE notes in our letter:

While UC Davis is free to urge students to consider the broader social and political implications of their speech, the university cannot, consistent with students’ right to be free from compelled speech, require its students to adopt certain viewpoints or affirm that particular types of constitutionally protected speech are objectionable as a condition of their ability to register for classes at the university.

Again, Supreme Court precedent is clear on this point. In West Virginia State Board of Education v. Barnette (1943), the Court said: “If there is any fixed star in our constitutional constellation, it is that no official, high or petty, can prescribe what shall be orthodox in politics, nationalism, religion, or other matters of opinion or force citizens to confess by word or act their faith therein.” Yet UC Davis is, through requiring students to complete this module, forcing them to express a particular belief: that the listed phrases are problematic.

Disappointingly, UC Davis has failed to acknowledge this. In his email to FIRE, Sweeney pledges UC Davis’s commitment to carrying out its obligations under the First Amendment and under the Violence Against Women Act, which requires institutions to offer training programs on sexual assault and domestic violence. He then contends:

[T]he activity labeled “Words that Hurt” does not require students to take a stance on any issue.  The activity simply asks that students match up words/phrases with reasons for why the language is problematic, not that the student must agree that the language may be problematic.

Sweeney writes that “even if a student gets every question wrong in the activities and the quizzes, the student will still be given credit for completing the training,” and thus no student is required to adopt a certain viewpoint as a condition of registering for classes. But in order to complete the training, a student has to choose one of the answers proposed by UC Davis, all of which a student might disagree with. Sweeney’s attempted justification is tantamount to UC Davis demanding that its students pray, but defending that demand by allowing students to pray to whatever deity they choose. That students can choose the flavor of compelled speech does not make it allowable under the First Amendment.

FIRE’s letter provides not just the legal foundation for why UC Davis must revise its training materials (or make the training optional), but also the moral and practical reasons:

At the heart of the First Amendment’s protection of freedom of conscience is a recognition of our own limitations: Like us, those in power are neither omniscient nor omnipotent, and therefore have no right to dictate to others what personal beliefs are acceptable to hold. Our nation’s respect for the inviolable sanctity of the individual mind is rooted in the wisdom of humility and restraint. It is hard to imagine a social goal more benign than that of reducing the heinous crime of sexual assault. However, by dictating to students the specific ideological, political, and moral assumptions they must make in order to attend the university, this program impermissibly crosses the boundary from education into thought reform.

FIRE hopes to see UC Davis reconsider and take action to ensure its students aren’t required to endorse viewpoints with which they might disagree.