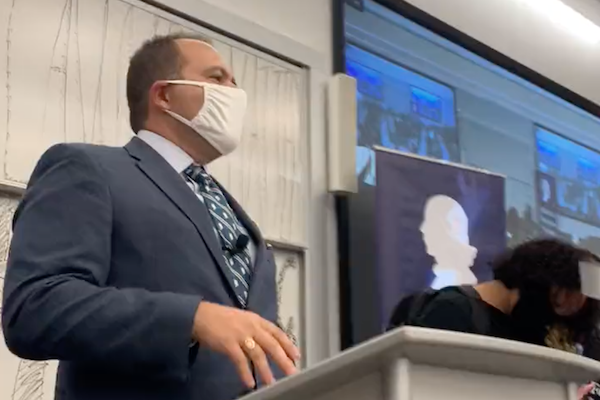 Two days, two public universities, two speakers drowned out and shouted down on campuses purportedly dedicated to the open exchange of ideas. Each incident demonstrated why the “heckler’s veto” is an illiberal, misguided attack on free speech.

First, at the University of California, Hastings College of the Law on March 2, constitutional scholar Ilya Shapiro couldn’t get through his opening remarks before audience members began chanting and yelling at him. Video footage shows a complete and total disruption of the event, demonstrably over Shapiro’s comments about the U.S. Supreme Court vacancy. Powerless to stop the noise, Federalist Society members eager to hear Shapiro endured a full hour of taunting, screaming, and abuse hurled at their speaker, rendering him unable to commence the event. The cacophony persisted despite warnings by UC Hastings administrators that disrupting events violates school rules.

In a powerful statement to the university community after the incident, UC Hastings urged law students to engage with opposing views instead of trying to silence them:

The suppression of unpopular views deprives students of necessary practical, academic, and professional development opportunities. Legal professionals must be able to engage with the full range of ideas, legal arguments, or policies that exist in the world as they find it. The goal of education, and especially legal education, is to develop a broad and deep understanding of, and ability to engage on the merits with, the full panoply of viewpoints that exist in our society, including those we might find abhorrent. Indeed, possibly especially including those that we find abhorrent.

The act of silencing a speaker is fundamentally contrary to the values of this school as an institution of higher learning; it is contrary to the pedagogical mission of training students for a profession in which they will prevail through the power of analysis and argument.

A day later, at the University of North Texas, members of the Young Conservatives of Texas student group likewise were unable to hear from state legislative candidate Jeff Younger, as protestors banged tables and rang noisemakers to drown him out. Younger appeared to welcome the disruption, but was largely unable to speak. Police escorted him out of the classroom 40 minutes short of his allotted time, to the jeering of audience members.

Unlike peacefully holding signs, turning one’s back to the speaker, or holding a competing event, substantially disrupting another’s expression is inconsistent with the values of free speech.

In a statement last night, UNT President Neal Smatresk extolled “the importance of freedom of expression and . . . students’ ability to speak up for themselves and participate in nonviolent protest. . . . but last night’s behavior by some individuals is not reflective of the UNT I know and love.”

The heckler’s veto, or the use of disruptive tactics to silence speakers, has no place in educational institutions dedicated to fostering freedom of speech. Like book burning, it is a form of repression rooted in a desire to prevent the full array of ideas from being heard. Rather than allow individuals to learn from speakers and make up their own minds about the world around them, the heckler arrogantly prevents all listeners from hearing the speech. Shutting up speakers supplants challenging divergent opinions with logic and reason.

The willingness to have a discussion necessarily entails allowing your adversaries to speak, and that’s what separates the heckler’s veto from protected counterprotest. FIRE urges students to counter speech they dislike with more speech, not censorship or violence. This “more speech” approach fosters a deeper understanding of opposing views, but these salutary discussions cannot occur when one side persistently disallows the other to speak. The categorical difference between more speech and the heckler’s veto is the rejection of any effort to meaningfully engage with opposing views, eschewing dialogue for disruption.

Ilya Shapiro at UC Hastings. Sound on to hear what Black law students and allies have to say. pic.twitter.com/7kQ0y80qhh

At both UC Hastings and UNT, there was little — if any — attempt by the audiences to challenge the speakers’ views, only their ability to speak. The persistent racket of table banging and chanting left no room for the kinds of pointed questions that students could use to object to the speaker’s ideas. Yelling over someone as they try to talk is as much of a discussion as playing a tuba from the audience during an orchestra concert. Unlike peacefully holding signs, turning one’s back to the speaker, or holding a competing event, substantially disrupting another’s expression is inconsistent with the values of free speech.

In its statement, UC Hastings rightfully points out how lawyers must rely on “the power of analysis and argument to change hearts and minds.” In the practice of law, attempts to shout down distasteful speech from witnesses, attorneys, or judges will likely lead to losing cases, clients, and law licenses. UC Hastings, as an institution training the next generation of attorneys, makes clear to students that disruptive tactics cannot masquerade as effective advocacy. Directed to those who derailed Shapiro’s event, the university calls for students to grapple with offensive words using their own speech, not noisemakers.

Universities shape their institutional culture of free speech by acquiescing to the heckler’s veto or worse — encouraging it. Behavior that is rewarded gets repeated; every successfully disrupted event engenders more disruptions and fewer speakers. Universities must step in to prevent shoutdowns and protect speakers, else they risk creating a sterile academic environment hostile to all expression unpopular with proverbial bottle throwers.

We urge UC Hastings and UNT to uphold the free exchange of ideas on campus by denying hecklers the power to veto speech.