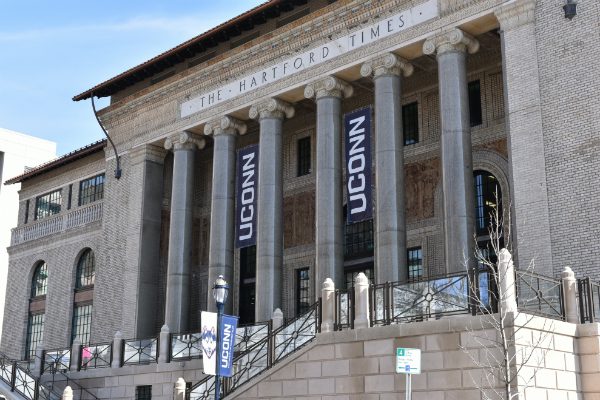 One of the two University of Connecticut students arrested last week by university police officers for using a racial slur made his first appearance in a criminal court on Wednesday, charged with a misdemeanor for violating a state law prohibiting speech that “ridicule[s]” protected classes of people. As FIRE explained in a recent letter to UConn, government actors — including state universities — may not punish this type of speech, however offensive, without violating the First Amendment.

Last week, UConn responded to our letter, saying that the university “wholeheartedly shares FIRE’s steadfast defense of free speech principles,” but advised that the criminal charges were “in the hands of the state of Connecticut.” Per UConn, FIRE’s concerns about the obviously unconstitutional statute are better directed at the state legislature, not the police who enforced it, and the university and its police are now powerless to rescind the charges against the students.

If the University of Connecticut proceeds to discipline the students based on the content of their speech, the university would violate not only well-established law but a binding court order.

But the Hartford Courant reports that the students “face disciplinary action from UConn, including expulsion, for potential violations of the university’s code of conduct.” UConn refused to confirm to FIRE whether the students could face student disciplinary charges — which are different than the criminal proceedings — due to federal privacy law.

If the university proceeds with disciplinary charges, and if the university imposes discipline based on the content of the students’ words, UConn could quickly find itself violating not only clearly established law under the First Amendment, but also a consent order entered by a federal court in 1990, binding it from doing so.

Statute barring “ridicule” abused by police and the University of Connecticut

As we wrote last week, the statute is both unmistakably unconstitutional and inapplicable to the two students who yelled an offensive word at nobody in particular. The law is limited to commercial advertisements, providing in full:

The statute grants wide discretion to law enforcement to arrest anyone perceived to have used racially-offensive language. Unless a statute like this one is cabined to meet the narrow exceptions to the First Amendment — such as true threats — police will have the discretion to punish speakers, whether for an immature dare to use the most offensive word in the English language or for political speech critical of racism or white people.

Under UConn’s telling, police are handcuffed by the statute and simply must arrest those who violate the law. UConn explains:

The UConn Police Department, like all law enforcement officials, is obligated to investigate potential criminal matters and present the results of their investigations to the chief prosecuting official. The chief prosecuting official determines whether there is probable cause to charge an individual with violations of existing law. Before an arrest warrant is executed, it must be approved by a judge. That process was followed in this case.

This, of course, ignores the university’s role in initiating the case. UConn’s Dean of Students sent the video of the encounter to the University of Connecticut Police Department, and the university’s president has praised the arrests.

It also ignores the discretionary role police officers play in deciding when to effectuate an arrest. It’s hard to know which is worse: that police are obligated to arrest any utterance that offends on the basis of “creed, religion, color, denomination, nationality or race,” or that they simply have the discretion to arrest if the speech offends them personally.

How do police in Connecticut apply this broad discretion? Eugene Volokh, a law professor and First Amendment scholar at UCLA, used public records requests to survey how Connecticut police were using the statute; I asked him for those records and he graciously obliged.

While the statute has not been utilized enough to draw anything resembling a statistical conclusion, records of its use indicate that police officers use it in a variety of situations. They sometimes use it to arrest people for conduct that might lawfully be punished under a narrow “fighting words” statute.

More troublingly, police use the law to arrest (or pile on additional charges against) the homeless, mentally ill, or people who direct race-based insults at police, including white officers.

Take, for example, the pregnant woman who was arrested after insulting police as “white pigs” when they found half a gram of marijuana on her table. Or the woman who, already in custody after being pepper-sprayed during a bar fight, was also charged under the statute because she called a police officer a “bald headed cracker” and “bitch as[s] nigga cracker.”

Regulations that grant broad discretion to the authorities will most burden those who lack the means to defend themselves or those whose words or views are most reviled.

UConn may violate a federal court order it forgot

In 1989, the New York Times reported on a lawsuit brought by a UConn student:

To Nina Wu, a junior at the University of Connecticut, the handmade poster she hung on her dormitory room door a year ago was just a joke. It listed the types of people who were “welcome,”’ “tolerated,” “unwelcome” and “shot on sight.” The last category included “bimbos,” “preppies,” “racists” and, some students say, “homos.” [Wu denied this.]

University officials expelled Miss Wu from all residential and dining halls in April. They found the word “homos” a violation of the student conduct code’s anti-harassment rule, which prohibited “making slurs or epithets based on race, sex, ethnic origin, religion or sexual orientation.” […] [T]he incident was sparked by two women who felt that the word “bimbos” was directed at them. Disciplinary action was taken only after the official reviewing the complaint found that the poster also contained an anti-homosexual slur.

The UConn policy challenged by Wu was enacted after several Asian-American students were spat upon and harassed by two football players, who made racial comments. Wu, an Asian-American student, was the first person charged under the policy, which banned “advertising” (like the criminal statute) “offensive, indecent or abusive matter concerning” others, even if those words were not directed at others (which would be closer to a prohibition on “fighting words,” which are not protected by the First Amendment) or were not true threats.

The consent order is old. It is no longer available on PACER and the judge who signed it has long since died, showing how long it has been since university “hate speech” codes were first struck down—a factor the university’s administrators would do well to consider when weighing their personal exposure to litigation. I saw that the university had previously been asked for a copy of the settlement agreement, so I also asked. The university told me they don’t have a copy of it.

Fortunately, Mario Cerame of Brignole, Bush & Lewis, LLC, who is representing one of the two students, provided FIRE with a copy of the consent decree. The order permanently enjoined the University of Connecticut from enforcing “any . . . policy that interferes with the exercise of First Amendment rights by . . . any other student, when the exercise of such rights is unaccompanied by violence or the imminent threat of violence.”

That means that if the University of Connecticut proceeds to discipline the students based on the content of their speech, the university would violate not only well-established law but a binding court order.

FIRE will continue to monitor the situation at UConn and provide updates as we get them.