FIRE > Newsdesk > UNC, Halloween, and the ‘Professionalism’ Threat to the First Amendment

This being Halloween week, we’ve seen a few cautionary notices from universities warning of the potential for hurt feelings and emotional harm caused by culturally “insensitive” Halloween costumes. To cite one example, the University of Minnesota (UM) cautioned students to “keep in mind that certain Halloween costumes perpetuate racial, cultural, and gender stereotypes” and that such costumes “can depict identities in ways that are offensive or hurtful to others.”

Many of these university statements function as reaffirmations of institutional values, such as diversity, tolerance, and inclusion, and obviously universities are more than free to issue them. UM gave some common sense advice, as well: “[K]eep in mind the potential for social media posts to have a long-term impact on your reputation.” When Gawker is actively soliciting pictures of college costumes, this advice is well taken.

But then there is the woeful email sent to students at the University of North Carolina School of Law (UNC Law), after some students satirized the student government’s “We’re a Culture, Not a Costume” campaign with flyers like these (click for full size): 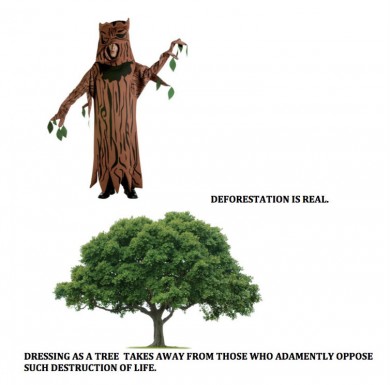 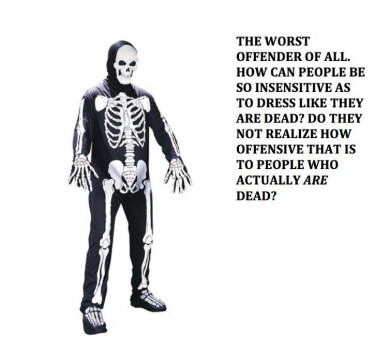 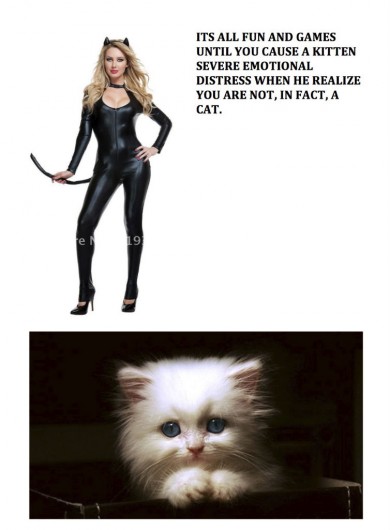 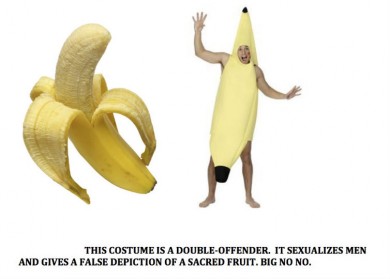 With Halloween later this week, we wanted to remind you to be thoughtful and respectful when celebrating.  In particular, please keep in mind that certain Halloween costumes inappropriately perpetuate racial, cultural, and gender stereotypes. Although it may not be the intent, these costumes, and choosing to wear them, can depict identities in ways that are offensive or hurtful to others.

In an effort to remind students about the impact of their actions on others, and with the law school’s support, the SBA Multicultural and Diversity Committee posted several flyers around the school earlier this week (for example: http://ow.ly/i/7nMHC).  Some of these flyers have been removed or covered by posters that mock the message.  This behavior is unprofessional and unacceptable at the law school and in the profession.  Most disturbingly, it is creating an environment of exclusion for students, faculty, and staff.

As members of the Carolina Law community, we all are expected to act with an understanding of the concepts of diversity, inclusion, and respect. As a result, and after consulting with Dean Boger, the law school administration has contacted the UNC Equal Opportunity and Compliance Office to establish an institutional response to this behavior and to help develop programming for our entire community.

Once a plan for programming has been established, we will communicate it to you.  In the meantime, if anyone wants to discuss these issues or our response, please do not hesitate to contact us.

First things first: If the SBA’s flyers were removed or vandalized, that’s unacceptable. FIRE has no way of knowing the circumstances at this point. But let’s focus on the deans’ decision to target satirical expression.

The deans don’t directly allege that the satirical flyers are not protected by the First Amendment. That, of course, would be ridiculous. Satire enjoys very strong protections under the First Amendment, and the people running UNC’s law school would be among the first to know that. Remember, just to name one case, the Supreme Court’s famous ruling in Hustler Magazine, Inc. v. Falwell, 485 U.S. 46 (1988), in which the Court unanimously ruled that the magazine had the right to print a spoof ad playfully insinuating that Reverend Jerry Falwell lost his virginity to his own mother in a drunken outhouse tryst.

No, the UNC Law deans resort to terms like “unacceptable” and the increasingly-used “unprofessional” to make their case that this satirical expression should be eliminated. It’s hard to take seriously the claim that satire is unacceptable in the legal profession. Would the same deans suggest that while satire is acceptable for, say, journalists, it’s unacceptable for the lawyers who come to their defense? Should the legal team that secured a 9–0 Supreme Court victory for Larry Flynt and Hustler have gotten a spanking from their local bar for it?

More pernicious, though, is the claim that such expression is “unprofessional,” implying that it should be prohibited—no matter how strong its First Amendment protections. UNC Law’s message to law students is just another brick in the wall of using “professionalism” (or “dispositions,” depending on the field) as an end run around students’ free speech rights. Limiting what students engaged in professional study may say or do has dangerous consequences. As universities are ever more emboldened to punish and drive out those students whose attitudes, expression, or behavior are deemed for any reason whatsoever to be “wrong,” and those students are thus declared unfit for entry into their chosen profession, the profession itself suffers.

Among other problems, granting universities leeway to punish protected speech in the name of an amorphous notion of “professionalism” effectively undoes decades of progress defeating unconstitutional speech codes at campuses around the country. Last December, FIRE and the Student Press Law Center argued this point in an amici curiae brief on behalf of former University of Hawaii student Mark Oyama, who sued UH after it dismissed him from its teacher education program due to his expression of personal views that UH deemed “not in alignment” with the teaching profession. As we argued in our brief (PDF):

If universities may dismiss students from educational programs on the grounds that the student’s views fail to comply with dominant professional norms, then most of these campus speech codes could be revived merely by being slightly reworded (for instance, on the theory that allegedly bigoted or otherwise offensive speech is contrary to professional norms). Indeed, if university student speech expressing calm, reasoned views on important public policy topics such as age of consent laws and disability education policy is stripped of First Amendment protection, then universities would have a virtually free hand in engaging in the viewpoint discrimination that the Supreme Court has long condemned. As the speech code cases show, even well-intentioned university administrators often face substantial pressure—from activists, legislators, other administrators, faculty, or students—to restrict student speech. The decision below would give administrators a roadmap to impose such restrictions.

UNC Law expects to be given deference in judging for itself what is and is not consistent with the law’s professional standards, even on matters of purely protected extracurricular speech. We should not give it to them, because we’ve seen where that road leads—to the detriment of a field’s would-be practitioners and ultimately of the professional fields themselves.

At this point, we don’t yet know what UNC Law’s “institutional response” to this incident, referenced in its email, will involve, and it may prove unobjectionable. But this much seems clear: UNC Law’s obfuscation of its law students’ First Amendment rights poses a far greater threat to the profession than these students choosing to exercise those rights do.