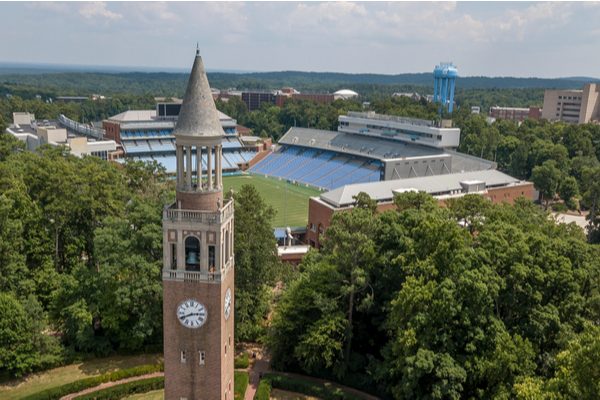 For the third time in the last several months, a trustee in the University of North Carolina system is placing political pressure on their institution because of protected, if controversial, speech.

This time, the blowup is at the University of North Carolina Wilmington, where a trustee appointed by the state’s legislature is pressuring administrators to conduct an investigation and take action against a professor over a Facebook post that read “Blow up Republicans.”

That professor, Dan Johnson, has since deleted the post, and the university said in a statement that it had “acted on the information in a timely and appropriate manner” and that the “faculty member expressed deep remorse and deleted the post.”

That post is protected by the First Amendment. Even if it’s construed as literally calling for violence — and not as figurative speech hyperbolically calling for the end of the Republican Party — it does not meet the legal standards for unprotected true threats or incitement. As we’ve explained time and time again, political expression often uses themes of violence, but that does not make it a threat.

Although UNCW administrators correctly determined as much, at least one trustee isn’t satisfied. Trustee Woody White told Campus Reform he believes Dan Johnson, the associate professor at UNCW’s School of Health and Applied Human Sciences whose post drew public anger, should be investigated — or sent to “sensitivity training” — for the post. Yesterday, he told the Wilmington Star-News that more should be done:

In an email, UNCW Board of Trustees member White said an investigation by the chancellor “is necessary to reveal the context with which the post was made. What prompted it? How long was it up and what caused it to be taken down? … What assurance do we have that, in the future, students coming into his class will be welcome regardless of their political affiliation? These are important questions.”

So far, White — who stopped short of saying Johnson should resign or be fired — is the only board of trustees member to call for an investigation into the matter.

White said that even though UNCW found Johnson’s post not to be a “true threat” in its statement, “The words he chose to post called for violence. Violence against people with whom he disagrees. That is unacceptable commentary, even if it was impulsive and even if he is sorry for it now. I am encouraged that he is sorry about it, but in the absence of more information, no one knows how he meant it or why he posted it.”

White admitted that it’s “unlikely” that Johnson’s post “crossed the legal line (for First Amendment freedoms) established by the (Supreme) Court, but in my opinion he certainly crossed the line, by a long distance, of what is appropriate and expected from professors.”

White’s public comments about the matter seem to suggest that he is aggrieved that institutions of higher education have censored or pressured conservative faculty members. That’s certainly true — Mike Adams, a perennial source of controversy at UNCW, successfully sued the university to defend his First Amendment rights, leading to a 2011 legal victory that protected not only Adams, but faculty across the Fourth Circuit. (Adams was represented by former FIRE President David French; FIRE joined an amicus curiae brief in support.)

And then there was the incident last year involving Professor Adams that surely must be affecting the reaction to that of Professor Johnson: UNCW’s institutional reaction to Adams’ May 29, 2020, tweet addressing state governor Roy Cooper that compared North Carolina’s COVID-19 restrictions to slavery, writing “Massa Cooper, let my people go!” As FIRE President and CEO Greg Lukianoff wrote, in a moving blog entry about Adams titled Professor Mike Adams’ suicide will always haunt me:

Mike’s situation was a textbook cancellation: It was focused, intense, and demanded immediate termination. UNCW extended the olive branch of early retirement in order to avoid the inevitable litigation that would follow an outright termination. On June 29, UNCW announced on Facebook that Adams would retire, effective August 1. That announcement triggered additional rage-filled responses, because Adams would receive a settlement of over $500,000 (which, given he had at least 10 more years to his career before normal retirement age, was a comparatively small amount).

UNCW’s chancellor would defend the settlement on July 2, arguing that the last lawsuit UNCW incurred for unconstitutionally punishing Adams’ freedom of expression — the tenure fight — cost roughly $700,000. For a school that desperately wanted to be rid of someone who was in his third decade of starting trouble at UNCW, a few hundred thousand dollars was a bargain.

There’s no suggestion that UNCW is planning to send Professor Johnson to an early retirement — nor should it, of course. But it’s not hard to compare the administration’s public reaction to Adams’ tweet versus its reaction to Johnson’s tweet and detect a pretty strong difference not just in substance but in tone.

White says that “[w]hen we have the chance to move the needle toward one standard, we should do so.” In this, he is manifestly correct. At a public institution such as UNCW, that standard is the First Amendment, and it is undermined when institutional leaders hedge on its robust protection of speech. Past institutional failures to defend others’ rights must not be used to justify contemporary censorship. Justifying calls for unconstitutional censorship on the basis of applying the “new rules” set by political opponents, holding them to their own standards, or simply teaching them a lesson make such calls no less unconstitutional and wrong. The tools of censorship are metaphorical “weapons” that anyone can pick up, and trying to do so in the name of rectifying mistreatment is more likely to just ratify their use. Applying the approach you claim to disdain doesn’t rectify mistreatment; it reinforces its use. Whatever UNCW’s past transgressions, it should not be faulted for coming to the defense of speech now.

But if White is only posturing, others have picked up the banner. Rep. Madison Cawthorn tweeted that Johnson’s post is “criminal” (it is not) and strongly suggested he should be fired:

.@UNCWilmington you cannot advocate for “inclusivity” and “unity” while employing a man who wants to murder 74 million Americans because he disagrees with them.https://t.co/qJdApYYFMN

“My understanding of the status of Mr. Johnson’s communication is that it is constitutionally protected speech,” he said. “If that understanding is correct, then we should also acknowledge the chilling effect caused by investigations, an impact that would be felt both by [Professor] Johnson and the entire campus community.”

Trustees — as agents of the state — should not be pressuring the institutions they govern to curtail expression.

The pressure follows trustees’ balking at Nikole Hannah-Jones’ tenure bid at UNC Chapel Hill, and the Board of Governors’ refusal to reappoint a law professor to a UNC Press post, allegedly due to his criticism of the board’s handling of the Silent Sam controversy. (FIRE has written to UNC to raise questions about Hannah-Jones’ tenure bid, but because the UNC Press post is an administrative role, it falls outside of our institutional purview, which is limited to defending the rights of students and faculty.)

Trustees — as agents of the state — should not be pressuring the institutions they govern to curtail expression. That’s why we’ve written a letter to the University of North Carolina Wilmington’s Board of Trustees, calling on the trustees to stick to the First Amendment, which protects the rights of faculty to engage as private citizens in speech that others find unmeasured, unwise, or objectionable. Whatever the grievances on either side might be, if UNCW is to avoid an endless tug-of-war that will do nothing but continue to chill campus expression and damage UNCW’s reputation, leaders on all sides must embrace principled consistency and defend freedom of speech, no matter the source.