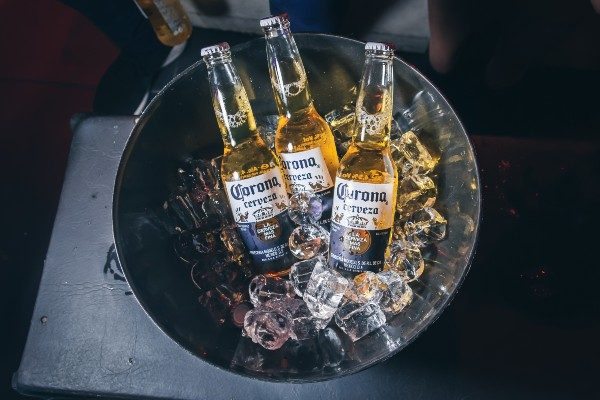 A video that — and I apologize, but there’s no better way to put this — went viral has led the State University of New York at Albany, a public university, to issue a statement condemning students’ “coronavirus”-themed party and pledging to investigate any “misconduct.”

The video, which has since been removed from the @BarstoolAlbany Instagram page, reportedly showed “a bucket filled with ice and bottled Corona beer and a student wearing a surgical mask over his face,” along with the caption: “Corona virus isn’t gonna stop anyone from partying.” The video also reportedly showed a white sheet with a biohazard symbol and “two faces,” one with an X over each eye and the other a “frown, with what looks like straight lines for eyes.”

On Sunday, the Asian American Alliance, a student organization at SUNY Albany, criticized the event in a statement on Instagram, calling on the university’s administration to “investigate this illegal student group” and “requir[e] them to delete this video and to apologize on their Instagram homepage,” presumably referring to the @BarstoolAlbany account.

If you would like to help bring justice, please email the Dean of Students (dos@albany.edu) & the Vice President of student affairs (Mike Christakis) to let them know that this isn’t okay with us! UAlbany does not stand for this kind of racism 💛💜 #EndStereotypes #inclusivity #NoToHate

On Thursday, the university issued a statement, saying that its administration was “aware of a coronavirus-themed party that was recently held off-campus and not sanctioned by the University at Albany,” and that the “theme of this party was distasteful and hurtful and is not representative” of the university or its students. The university went on to say that “any allegations of conduct violations will be investigated and addressed through the University’s disciplinary process.”

To be clear: Per the reported descriptions, the video, the Instagram post, and the partygoers’ expression related to the party’s theme are all protected by the First Amendment. SUNY Albany is a public institution and may not punish its students for expression protected by the First Amendment, no matter how offensive others may find it. As the Supreme Court held nearly fifty years ago, in a case involving a student newspaper’s depiction of police officers raping the Statue of Liberty: “the mere dissemination of ideas — no matter how offensive to good taste — on a state university campus may not be shut off in the name alone of ‘conventions of decency.’”

The university’s statement is ambiguous as to whether it is currently investigating the party itself. The assertion that “any allegations of conduct violations” would be investigated by the university is not particularly informative, and may reasonably lead people to believe it is investigating the expressive aspects of the party.

Many reasonably interpret the assertion as an indication that the university would investigate the act of hosting a party with a “coronavirus” theme. But that act is expressive conduct protected by the First Amendment, even if others find it deeply offensive, racially offensive, or morbid. The act of hosting a party with a theme is itself expressive, and the First Amendment generally does not permit state actors — such as public universities — to make distinctions between whether expression is offensive or inoffensive. That’s why public officials, including those at public universities, cannot ban flag burning, drag shows, culturally appropriative Halloween costumes, and other expressive events that offend many other students, like an “ugly women” contest.

That the expressive elements of a themed party may be protected from punishment does not mean that hosting a themed party immunizes — again, sorry — its participants or hosts from punishment unrelated to the expression. For example, an underage student who finds himself in a viral video chugging a Corona Extra may not enjoy the First Amendment’s protection against an underage drinking charge just because he was wearing a costume.

But when the university is addressing a call for punishment premised on expressive aspects of a controversial event, statement, or act, it should be clear that it cannot and will not punish or investigate purely protected speech. An ambiguous suggestion that it will investigate “misconduct,” coupled with a condemnation of the expressive components of the event, will lead people to believe — wrongly — that the university can constitutionally investigate or punish that expression. It cannot. Even investigations into clearly-protected expression may violate the First Amendment.

Albany’s leadership should take its cue from Mark Hamilton, the former president of the University of Alaska. When faced with calls for censorship of a faculty member’s poem that had sparked campus controversy, he wrote:

What I want to make clear and unambiguous is that responses to complaints or demands for action regarding constitutionally guaranteed freedoms of speech CANNOT BE QUALIFIED. Attempts to assuage anger or to demonstrate concern by qualifying our support for free speech serve to cloud what must be a clear message. Noting that, for example, “The University supports the right to free speech, but we intend to check into this matter,” or “The University supports the right of free speech, but I have asked Dean X or Provost Y to investigate the circumstances,” is unacceptable. There is nothing to “check into,” nothing “to investigate.”

Opinions expressed by our employees, students, faculty or administrators don’t have to be politic or polite. However personally offended we might be, however unfair the association of the University to the opinion might be, I insist that we remain a certain trumpet on this most precious of Constitutional rights.