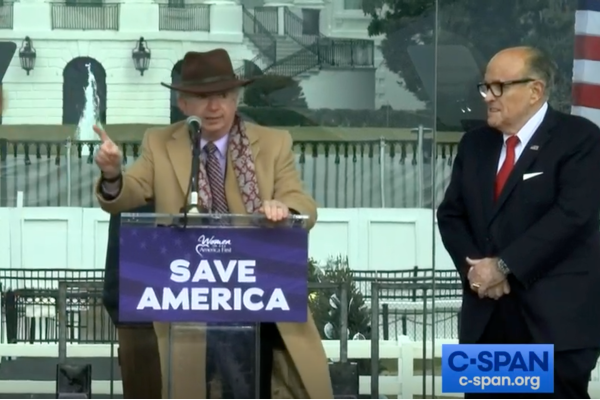 BOULDER, Colo., Feb. 3, 2021 — The First Amendment is clear: A public university cannot cancel a professor’s courses, withdraw his role in organizing campus discussions, and preemptively decline to renew his contract because of public anger over his extramural political expression.

But that’s exactly what the University of Colorado Boulder did to visiting professor John Eastman after he gave a three-minute speech at then-President Donald Trump’s Jan. 6 rally in Washington, D.C., well before the political violence that followed.

Today, the Foundation for Individual Rights in Education wrote to CU Boulder, explaining that — as the university’s administration recognized — Eastman’s speech did not amount to unlawful incitement within the meaning of the First Amendment. FIRE’s letter calls on the university to rescind the unconstitutional sanctions imposed on Eastman.

CU Boulder’s initial response to demands that it take punitive action against Eastman seemed to understand the law: On Jan. 7, Chancellor Philip P. DiStefano cited campus policy, correctly explaining “that the university will not censor a faculty member’s political statements or initiate disciplinary action because it disapproves of them.” He went on to say that policy “stems from the First Amendment” and “I will not violate the law by removing a visiting professor.”

Similarly, professor Daniel Jacobson, Director of the Benson Center at CU Boulder, where Eastman is a Visiting Scholar in Conservative Thought and Policy, stated that the center “defends the right of its scholars to express unpopular opinions within the limits of the law,” and acknowledged that Eastman “did not call for the violence that occurred after the event, and his speech is protected by the First Amendment.”

On Jan. 10, as public anger over the violence at the Capitol and election rhetoric mounted, Eastman was notified by Jacobson that his classes were cancelled, his responsibilities were rescinded, and his contract would not be renewed. He was forbidden to engage in outreach on behalf of the Benson Center or use campus resources for those purposes, lest he be charged with “insubordination.”

The reasoning? “Terrible press,” the school’s “reputation,” and pressure from “supporters” of the Benson Center, wrote Jacobson.

“The university’s rationales for punishing professor Eastman are fundamentally at odds with the basic principles of free expression,” said FIRE’s Adam Steinbaugh in FIRE’s letter to the school. “If donor interests, public anger, reputation, or administrators’ ire are sufficient to grant the institution the authority to punish members of its faculty, then only speech popular with donors, the public, and administrators is protected. This inverts the purpose of the First Amendment.”

CU Boulder has asserted that the College of Arts and Sciences typically requires 15 students for undergraduate classes and that Eastman’s courses did not meet that threshold. But FIRE has not been able to locate a policy to that effect and the university’s course registration database reveals dozens of courses in which there are currently fewer than 15 students enrolled. In fact, the university advertises its small class sizes, which it says “can vary from lectures of 200 or more students to smaller classes of 10-20 students.”

Eastman previously served as an attorney for Trump as a candidate for president of the United States. On Jan. 6, Eastman spoke during Trump’s rally at the Ellipse in Washington, D.C. His remarks lasted less than three minutes, focused on allegations of electoral fraud, and were followed by concluding remarks from attorney Rudy Giuliani. For the next hour, there were no speakers on stage, while the audience listened to 14 songs while waiting for Trump to speak. Eastman was not present at the Capitol protests — nor did he participate in any of the violence or unrest — that later occurred.

Eastman’s public comments and legal representation do not meet the exacting legal definition of incitement to imminent lawless action and were protected by the First Amendment’s protection for core political speech, as Benson Center Director Daniel Jacobson conceded the day after the Jan. 6 event.

Last August, CU Boulder revised its policies on free expression to earn FIRE’s top, “green light” rating for free speech. The rating means the school maintains no policies that threaten protected expression. The rating does not mean a school has not or will not take action in violation of its own policies.

“CU Boulder must live up to its own laudable statements and policies on free expression,” said Steinbaugh. “Punishing a professor for his protected political speech — including speech that others believe to be wrong or deeply offensive — is the antithesis of the First Amendment’s core aim.”