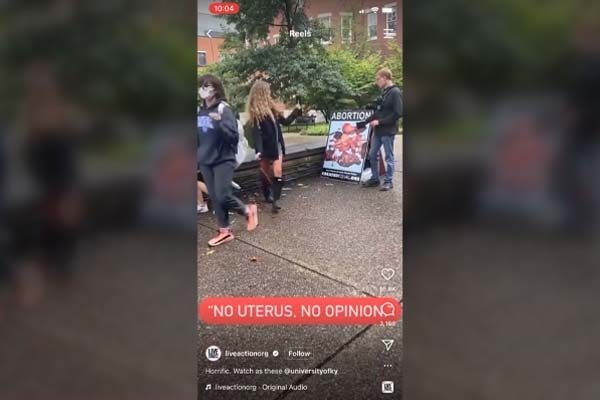 UPDATE (Feb. 4, 2022): The University of Kentucky tells FIRE it “is not investigating and has no plans to investigate the incident. To do so would betray the very purpose of the institution.”

The university says its tweets saying an investigation was underway were “inartfully worded.”

FIRE thanks UK for the timely response.

But the stain on the University of Kentucky’s reputation for threatening a lawful student protest on its public campus may last far longer.

FIRE wrote to UK this afternoon urging it to immediately reverse course after it tweeted yesterday that it will investigate a group of four students who displayed “mocking behavior” toward a pro-life demonstrator.

Or as we here at FIRE like to call it: Fully protected, core political speech.

In the video — which was apparently taken last fall but went viral just yesterday — the students are seen standing in front of a pro-life demonstrator’s sign — which depicts an aborted fetus — doing a roughly choreographed dance, and then grabbing their bags to leave. One of the women turns to the man and says, “Sorry. No uterus, no opinion.” She momentarily extends her middle finger and walks away, before turning back a final time to add: “Actually, I promise I’d kill my baby if I got pregnant.”

One of the other students chimes in: “I literally would! Are you kidding me? No uterus, no opinion.”

At one point, another student shouts — in feigned remorse — to the demonstrator: “Sorry. First Amendment, man.”

That’s the essence of FIRE’s letter to UK, reminding the public, land-grant institution that not only does the First Amendment protect this kind of basic, political counter-protest, but so does Kentucky state law, which mandates that UK maintain policies that uphold “the broadest possible latitude to speak, write, listen, challenge, learn, and discuss any issue,” and “a marketplace of ideas where the free exchange of ideas is not suppressed because an idea put forth is considered by some or even most of the members of the institution’s community to be offensive, unwise, disagreeable, conservative, liberal, traditional, or radical.”

The Kentucky law also bans “[unreasonable] restrictions on the time, place, and manner of student speech that occurs in the outdoor areas of campus or is protected by the First Amendment of the United States Constitution.”

The students’ expressive conduct here is wholly protected by the First Amendment, does not constitute unlawful fighting words or harassment, and cannot be investigated or restricted on the basis that some may find it offensive. The First Amendment protects the display of the middle finger. (Indeed, the display of the middle finger is so plainly protected by the First Amendment that officials who penalize such expressive activity have been held personally liable for violating clearly established constitutional rights.

(Read more about the expressive qualities of middle fingers here.)

We also note that even “mere” investigations, without additional punishment, violate the First Amendment when “an official’s act would chill or silence a person of ordinary firmness from future First Amendment activities.”

Even critics of the students’ expression have recognized it is plainly protected.

Mark Harrington, president of the pro-life group Created Equal, told local media today that it was his group that the students were confronting — and that he flatly opposes UK investigating them.

“Free speech is a cornerstone of our republic, and we oppose universities investigating students for their free expression,” Harrington told WTVQ. “[T]he university can play a role in teaching students to have respectful dialogue with those they disagree with.”

The university’s Twitter account responded to the video yesterday within roughly an hour, so we know they’re ready to spring into action when a policy violation occurs. We’ve given the university until close-of-business tomorrow to confirm that it will publicly rescind its investigation threat and take steps to make sure this doesn’t happen again.

And if UK won’t listen to FIRE, it should at least listen to its own students:

Cases:  University of Kentucky: Students Investigated For Viral ‘No Uterus, No Opinion’ Remarks