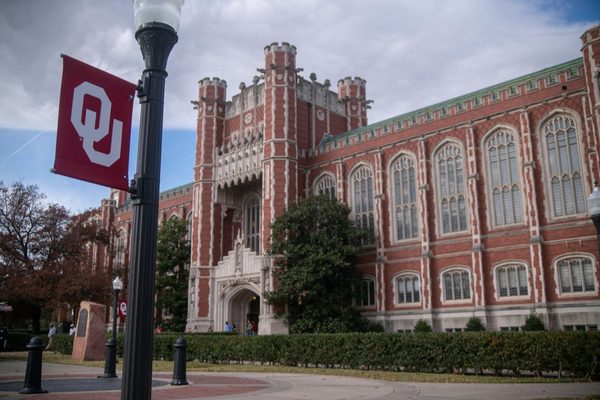 Last month, my colleague Daniel Burnett and I reported on an “Anti-Racist Rhetoric & Pedagogies” workshop at the University of Oklahoma, which taught instructors how to shut down disfavored topics and conversations in the classroom. Since then, FIRE has seen statements from some at OU disagreeing with our analysis.

Tellingly, however, none have seen fit to defend the actual words and statements that FIRE highlighted from the teacher training workshop. On Thursday, the AAUP’s Academe Blog posted an article by one of the workshop leaders, Kelli Pyron Alvarez, responding to FIRE’s report, which perhaps comes closest to doing so. Unfortunately, her statement did not quell our concerns; it amplified them.

Pyron Alvarez’s piece is titled “Why Boundaries for Classroom Speech Matter.” At FIRE, we agree that boundaries for classroom speech matter. Unfortunately, much of the criticism of FIRE’s reporting from the OU AAUP and others omits this understanding, falsely claiming that FIRE advocates for “an anything-goes approach in the classroom” or an “absolutist view of speech rights at the expense of other interests.”As we said in our previous reporting,

To be sure, faculty members have expansive academic freedom rights, and FIRE spends a lot of time defending those rights. They have wide latitude to manage the atmosphere and tone of the classroom. This may include inhibiting some student expression in class by directing classroom discussions, prompting students to write on topics of the instructor’s choosing, and preventing students from disrupting the class or talking out of turn.

But that is not what the workshop was about, as my colleague Nico Perrino explained last week.

In her article, Pyron Alvarez shares a personal story of dealing with a student who “was openly hostile to their classmates’ ideas, refused to listen to instructions, became combative when called out for not listening to instructions, and, outside of the classroom, engaged in behaviors and activities that made their classmates feel unsafe.” This appears to be the experience that led her to give the advice she did in the workshop about handling student disagreement in the classroom.

Based on her description of the student’s behavior, it’s quite possible that some of what this student did falls outside the bounds of what professors should tolerate in their class. It’s easy to imagine a student’s “combativeness” and refusal to listen to instructions causing a disruption that a professor would have every right to address, whether or not it had anything to do with ideology. It’s unclear, though, how stringent (and speech-protective) the standard is that Pyron Alvarez uses to determine when intervention is appropriate. She writes, for instance, that “when a student actively makes learning difficult for their classmates through verbal language or body language, I cannot stand by and allow that behavior to continue.”

Although we do appreciate faculty members’ right to control the classroom, they cannot abuse this power by using abstractly defined terms and misreading First Amendment law to shut down dissenting viewpoints.

It was clear from the video of the workshop that Pyron Alvarez is willing to shut down student speech — and again, FIRE agrees that certain circumstances may call for doing just that. But the notion of even the wrong “body language” exposing a student to potential sanction raises yet more red flags. Pyron Alvarez does not provide any examples of this student’s problematic body language, or an example of the speech she claims created a “hostile learning environment in which no one is learning.” What was the true nature of the student’s “offense”? We don’t have enough information to know.

What we do know is that Pyron Alvarez transitions the main point of her blog from her right to shut down “disruptive” speech to the fact that she shuts down speech “that could reasonably be perceived or interpreted as derogatory.” This makes it clear that she objects to the viewpoint of the speech, not any disruptive elements.

There is a major difference between disagreements based on facts and interpretations and the denial of human rights. My students are welcome to disagree with me, and we often do, but the denial of someone’s identity or human rights is not a good faith argument and crosses the line, legally and morally. I will not and do not allow that line to be crossed.

Denying someone’s rights is indeed a very serious matter. After all, preventing rights violations on campus is FIRE’s primary function. But Pyron Alvarez is not talking about actions taken by the government or similar authorities (like censorship or Jim Crow laws), or even private crimes like false imprisonment. She is arguing that simply stating one’s beliefs, if those beliefs cross Pyron Alvarez’s subjective line of what viewpoints are appropriate, is itself a denial of someone’s human rights. In this, she is consistent: In the Anti-Racist Rhetoric & Pedagogies workshop, Pyron Alvarez explains that for an individual to write an article arguing that it’s not hateful speech to address someone with pronouns different than those with which the person identifies is “invalidating that person’s humanity and their existence.” Were a student to plan to write such a piece for her class, she says, she would tell the student they cannot make that argument. Pyron Alvarez is not the only person to take such a position. But actually putting it into practice violates student rights and vitiates the purpose of higher education. As the Supreme Court said in Keyishian v. Board of Regents:

The classroom is peculiarly the “marketplace of ideas.” The Nation’s future depends upon leaders trained through wide exposure to that robust exchange of ideas which discovers “truth out of a multitude of tongues, [rather] than through any kind of authoritative selection.”

Toward the end of the piece, Pyron Alvarez gives another example of speech she says should be prohibited in the classroom: obscenity. She cites the landmark case of Miller v. California, misstating that obscenity is defined as “work that ‘taken as a whole, lacks serious literary, artistic, political, or scientific value.’” As FIRE’s Nico Perrino pointed out last week,

That argument is nonsensical. Miller applies only to depictions or descriptions of sexual conduct, which her readers would know if she didn’t selectively quote the test the Court used to identify “obscenity” in that case. The test, among other things, limits obscenity to work that “depicts or describes, in a patently offensive way, sexual conduct [emphasis added] specifically defined by the applicable state law.” The Miller case has zero to say about an “argument that invalidates or seeks to impede someone’s basic human right.”

To put it even more simply: the Miller test is an attempt to define, and applies only to, what most people simply call “hardcore pornography.” It provides no support whatsoever for her contention that “any argument that invalidates or seeks to impede someone’s basic human rights or their identities is not an acceptable argument for students to make, as it lacks political and scientific value and is in direct opposition to basic human rights.”

Although we do appreciate faculty members’ right to control the classroom, they cannot abuse this power by using abstractly defined terms and misreading First Amendment law to shut down dissenting viewpoints. That is where Pyron Alvarez goes wrong — and where she teaches others to go wrong in the Anti-Racist Rhetoric & Pedagogies workshop — and turns instruction into indoctrination.