A guest lecture on Ethiopia’s civil war at the University of South Carolina has been indefinitely postponed by the inviting professor after the choice of lecturer was criticized on social media by voices sympathetic to the Ethiopian government.

The disinvitation of Kjetil Tronvoll, Professor of Peace and Conflict Studies at Norway’s Oslo New University College, sounds a lot like the disinvitation of Dorian Abbot from MIT, with activists looking to isolate Tronvill and stop him from speaking anywhere. But it also has elements of Emerson College’s recent censorship of anti-Chinese government stickers, where apologists for a brutal regime are leveraging anti-speech elements in Western culture to accomplish the censorship those governments achieve with force at home.

That the Tronvoll invitation was rescinded by the professor who extended it might well mean there is no First Amendment issue at play. But the driving force behind that decision remains a threat to free expression and the culture necessary to sustain it, and we should be aware of the pattern it represents.

(Quick disclosure: My mother is Eritrean and left Eritrea, then still part of Ethiopia, when she was 14, driven out by the types of conflicts Tronvoll studies.)

On Nov. 11, Tronvoll was invited by Anu Chakravarty, USC associate professor and Director of Undergraduate Studies, to give a lecture on the Ethiopian civil war to the university’s African studies program.

Almost immediately following the announcement of the speech, complaints started to pop up on Twitter, many accusing Tronvoll of racial animus in his decision to criticize the Ethiopian government and accusing USC of anti-blackness for hosting him: 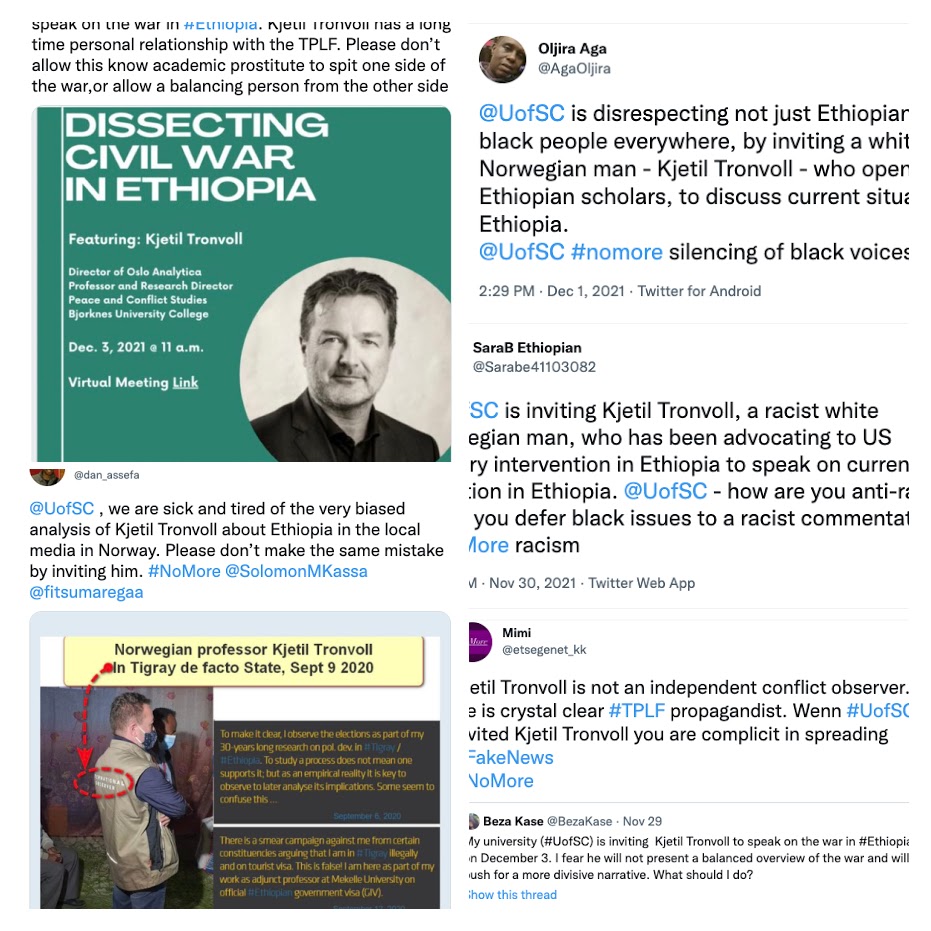 On Dec. 1, Tronvoll tweeted that he had been disinvited, along with images of a letter he sent to USC President Harris Pastides. In that letter, Tronvoll wrote:

As you may be aware of, President Pastides, a hallmark of genocide is for the perpetrators to silence all victims and critics of their actions . . . [t]he Ethiopian government and its support base in diaspora are orchestrating an intimidation campaign against all critics: journalist, human rights activist, and researchers alike — to undermine their legitimacy and mute their voices. The effect of such a toxic campaign is stifling academic freedom and freedom of expression in Ethiopia, and even more concerning apparently also at the University of South Carolina.

While Americans are generally familiar with China’s efforts to suppress information, it may come as a surprise that Ethiopia has no modern culture of free expression, either. From Haile Selassie’s empire to Mengistu Haile Mariam’s Marxist-Leninist control and the subsequent failures to reform under Meles Zenawi (who presided over a government with at least 60 political parties, all of them pro-government), there is no history of free expression, dissent, or even vocalized doubt in Ethiopian politics.

When Ethiopian Prime Minister Abiy Ahmed came to power in 2018, the world saw a glimmer of hope for an escape from a brutal cycle of fighting and repression. He ended the decades-long war with Eritrea (which earned him the Nobel Peace Prize), and reformed some laws that suppressed dissent.

Attempts to silence people only creates the impression that we could not otherwise answer their speech with our own, because the truth is not with us.

Over 260 websites were unblocked; for the first time in 14 years, the Committee to Protect Journalists recorded no journalists in Ethiopian prisons. Journalists still needed to be licensed, but there was hope.

But the limits of that hope were visible even then. Ahmed’s rise was a product of regional/political conflict, not the escape from it. While there are complex historical reasons why the actors here made the decisions they did, for our purposes, the effect is simple: the stability of Ethiopia and Ahmed’s power were challenged, and the government reacted by a return to brutal form.

Revoked licenses aren’t the end of it. Reporters Without Borders writes:

More than ten journalists were arrested in 2020 for often unclear reasons. Some were held incommunicado, without access to a lawyer, often for several weeks. In February 2021, a respected reporter for several foreign media outlets received a visit at her Addis Ababa home from gunmen who threatened her in connection with her coverage of the civil war in the northern Tigray region. Instead of investigating the incident and expressing their support, the authorities tried to discredit her by pointing out that she wasn’t accredited.

And by that measure, Tronvoll — who teaches at a university in Norway, the country with the most press freedom in the world, according to Reporters Without Borders — is a criminal in the eyes of his critics.

A government has no race

Perhaps the most troubling thing about Tronvoll’s disinvitation is the spread of the Chinese government apologist’s favorite tool: equating criticism of a regime with criticism of a race.

Along with the Emerson College case, we saw a similar tactic employed against University of San Diego Law School professor Thomas Smith, who criticized the Chinese government and ended up accused of making an ethnic slur. As Eugene Volokh and I wrote in a San Diego Union-Tribune op-ed about Smith’s case:

Governments are powerful, important institutions. As with any other powerful institutions, they can only be controlled if subjected to constant discussion, evaluation and criticism.

Of course, governments are also associated with people: their employees, their citizens, and often people who share an ethnic background with the government … it would be no triumph of human rights to insulate dictators from criticism if they have the good fortune to share an ethnicity with a domestic minority group.

Similarly, the voices against Tronvill want us to conclude that Tronvill’s criticism of Ethiopia’s regime is somehow anti-black because Tronvill is white, or that USC hosting Tronvill would advance anti-blackness. But the sum total of the evidence of his anti-blackness is that he questions the regime from Norway. That reasoning would encompass all criticism, legitimate or otherwise, and must be rejected.

USC should reschedule Tronvoll’s speech and apologize for delaying it.

I am not familiar with Tronvoll’s work and I have no idea whether his analysis of the conflicts in the horn of Africa show undue affection or criticism for any of the players involved. None of that should matter to whether he should be able to speak on the topic of his study on an American college campus.

Perhaps the most troubling thing about Tronvoll’s disinvitation is the spread of the Chinese government apologist’s favorite tool: equating criticism of a regime with criticism of a race.

In the American tradition, we don’t silence people because we think they’re wrong; we let them speak and we answer them with what we believe to be true. Attempts to silence people only creates the impression that we could not otherwise answer their speech with our own, because the truth is not with us. There are many ways we can respond to speech we don’t like that aren’t censorship, and choosing not to use any of them looks like an admission of intellectual weakness.

If Tronvoll’s work is genuinely suspect, permitting him to share it would debunk it faster. That his critics are motivated not to let anyone see the work could be a cultural difference in how we respond to critics, or it could be motivated by an awareness that the facts will support it. We’re left to guess. Within the United States, the benefit of that ambiguity will not accrue to the people who silenced him.