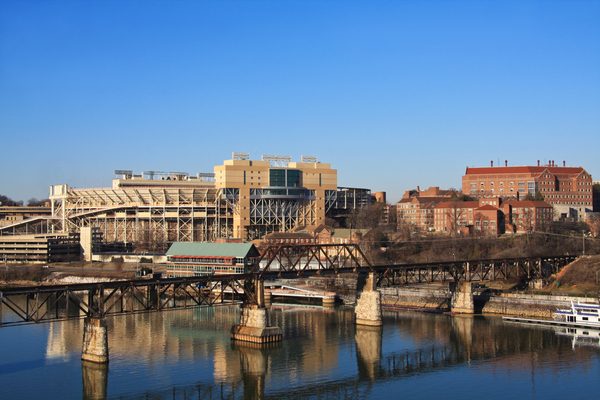 Sex Week is a week of activities put together by the student organization Sexual Empowerment and Awareness at Tennessee (SEAT), which seeks to foster “a safe space where students can openly engage in comprehensive and academically informed discussion about all things related to sex, sexuality, relationships, and gender.”

We’ve been writing about Sex Week since 2013, when legislative interference resulted in UT pulling $11,000 in funding from the event. However, Sex Week went on after private donors pitched in to fund the event. The following year, state legislators attempted to cut off all funding for outside speakers, and in 2016, the Tennessee legislature passed a bill prohibiting any state funds from being used towards Sex Week. Despite these efforts to shut it down, Sex Week has continued, and is currently funded by opt-in student fees.

Sex Week was in the news yet again last week after Todd Starnes, a columnist and Fox News radio host, devoted a segment on his radio show and published an opinion piece on Fox News decrying the annual event. Starnes took aim at the event because he feels it does not reflect Tennessee’s values, and he suggested to his viewers that they “[c]onsider supporting private colleges that are reflective of your values that teach the Constitution.”

First, there’s no longer anything for the Tennessee legislature to defund because Sex Week doesn’t receive state money.

Starnes was joined on his show by two guests, including former Tennessee State Senator Mae Beavers. The event has been a “shock to the good taxpayers of Tennessee for many years now,” said Beavers. She then called on the legislature to take action: “So many times we’re told, ‘Oh, you can’t do that.’ Well, we need to push the envelope on this one. This is ridiculous.”

It’s worth examining the arguments raised on Starnes’ show. First, there’s no longer anything for the Tennessee legislature to defund because Sex Week doesn’t receive state money. Sex Week programming is paid for by opt-in student activities fees. As UT spokesperson Tyra Haag told The College Fix: “Sex Week is a series of programs organized and funded by students who opt-in for a student fee at the beginning of the year. In 2014, the university adopted the opt-in policy at the state Legislature’s request.” So no state money is going to Sex Week.

It was also suggested on Starnes’ show that UT somehow prohibit it from occurring on campus. But UT can’t do that, not just because of First Amendment concerns, but because in May 2017, Tennessee passed the Campus Free Speech Protection Act. FIRE praised the law, which sailed through the Tennessee legislature, passing the House of Representatives with a vote of 85-7 and a unanimous 30-0 vote in the Senate. The act is relevant here because it prohibits discrimination in the allocation of student fees, and requires that colleges implement policies that affirm free speech and:

[maintain] a campus as a marketplace of ideas for all students and all faculty in which the free exchange of ideas is not to be suppressed because the ideas put forth are thought by some or even by most members of the institution’s community to be offensive, unwise, immoral, indecent, disagreeable, conservative, liberal, traditional, radical, or wrong-headed.

There’s also a point to be made about the broader principle of legislative interference with student expression on campus. As my colleague Will Creeley explained back in 2013, Justice Frankfurter’s concurrence in Sweezy v. New Hampshire (1957) makes clear the danger inherent in legislative attempts to intrude on campus expression. In Sweezy, the Supreme Court recognized the importance of academic freedom after a professor refused to answer the state Attorney General’s questions about his lectures and writing. In his concurrence, Justice Frankfurter wrote:

For society’s good — if understanding be an essential need of society — inquiries into these problems, speculations about them, stimulation in others of reflection upon them, must be left as unfettered as possible. Political power must abstain from intrusion into this activity of freedom, pursued in the interest of wise government and the people’s well-being, except for reasons that are exigent and obviously compelling.

This isn’t the only state in which we’ve seen legislators attempt to restrict students’ expressive rights. After all, who could forget our Stand Up For Speech Litigation Project lawsuit against administrators at Iowa State University who rescinded approval for a T-shirt design that was criticized by state officials? That suit resulted in two victories from the United States Court of Appeals for the Eighth Circuit, and the state being on the hook for nearly $1 million in damages and attorney’s fees. Then there was an attempt to withhold funding from the University of Wisconsin–Madison because it offered a class on racism titled “The Problem of Whiteness.” And, of course, there was the time that South Carolina punished the College of Charleston and the University of South Carolina Upstate for including LGBT-themed books as required reading for freshmen.

Few things are as “offensive” to the First Amendment as banning speech because some might find it offensive or distasteful.

Let’s also take a moment to unpack the concern about whether Sex Week reflects Tennessee values and the suggestion that parents should send their children to schools that “teach the Constitution.” First, UT is one of a small but growing number of schools that earns an overall “green light” rating in our Spotlight database because its policies do not seriously imperil free speech, putting UT far ahead of the pack when it comes to actually following the Constitution. Moreover, it’s hard to see how banning Sex Week from campus because it doesn’t reflect someone’s “values” wouldn’t be an obvious act of viewpoint discrimination, which is forbidden under the First Amendment. Nor have we seen anything that indicates that Sex Week is legally obscene and therefore unprotected. Rather, the claim is that Sex Week should be banned from campus because it offends some people’s values. And few things are as “offensive” to the First Amendment as banning speech because some might find it offensive or distasteful. Students at UT aren’t just learning about the Constitution in the classroom; they’re seeing it in action.

Fortunately, UT has not bowed to the pressure, and Sex Week is currently going forward this year, just as it has in the past. Those who are offended by Sex Week can take solace in the fact that the First Amendment protects their right to criticize it — just as it protects the First Amendment rights of the students attending and organizing Sex Week.